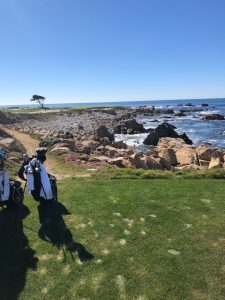 The tee shot on the 14th over the ocean at Dunes. 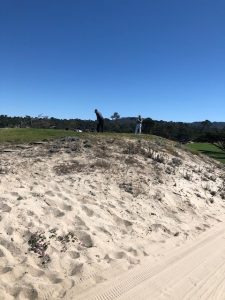 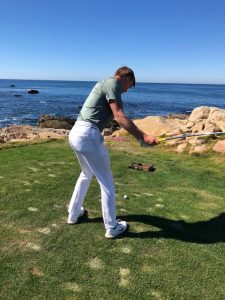 Chris teeing off at the 13th 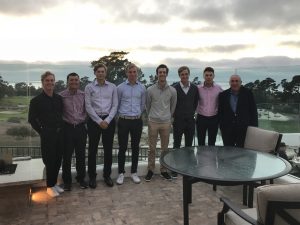 One of the benefits about writing about golf is the opportunity to generate revenue to support college golf programs,  The First Tee organization and other charities that benefit children.  I firmly believe that golf and education make good partners as the game adds ethics, values and social graces to the participant’s life and presents a point of view that can be guide in various social and business situations.  On October 16, after a lot of planning with head coach, Jack Kennedy, we were able to sponsor the entire University of San Francisco Golf Team to play at Monterrey Peninsula Country Club.  Planning these events is not my strong suit as we had to organize 7 players and 3 members to fill 3 foursomes.  We had to organize locker facilities, dinner arrangements and ensure that we were in compliance with the vagaries of NCAA rules regarding meals and other sundry matters.  Thanks to fellow members, Bruce Black and Dave Anderson, we were able to make this happen with 3 tee times commencing at 11:00 on the Dunes Course.  The “Dons” van showed up dutifully at 10:15 with the knowledge that the driving range would be closed due to another event being staged at the club.   It just so happened that Tiger Woods was present hosting a clinic at the club followed by a Tournament that would take place on the Shore Course.  You can imagine that there was considerable interest in the clinic and I thought we might lose our guys as they meandered over to the clinic to get a glimpse of Tiger.  After a short search for the players, tee times commenced on schedule.  We decided on a two best ball competition for the three groups and the guys marched back to the tips on the Dunes Course.  I’ve never seen anyone play from the tips on the Dunes Course and as we would discover throughout the day, the tee boxes looked like that they hadn’t seen a player in months if not years.  I played with Coach Kennedy, Chris Palsson and Toby Briggs in the first group.  Coach Kennedy  said that the players would not absolve him from playing from the tips so I told him that this was beyond my skill level as I marched to the regular men’s blue tees.

I knew these kids were good but these kids are really good.  300 yard drives were routine throughout the day and were typically 30-50 yards past me while I was driving from the blue tees.  By the end, I was keeping up with Coach Kennedy but not the kids.  The 15th hole at Dunes is a 636 yard, par 5 from the tips and Chris hit his drive 336 yards and was disappointed when he couldn’t make the green with a 3 wood.  However, he holed his pitch shot for an eagle.  After a terrific drive on the par 5, 12th hole, Toby’s second shot found the dunes on the right side of the hole-no problem-he holed it out from the dunes for an eagle.  On the signature, par 3, 14th hole, I joined the guys to the back tees on the rocks overlooking the Pacific.  My 7 wood found the green to about 15 ft but I did miss the birdie putt.  Every group played well and we were in at -12 (I did contribute on 3 holes), second group was -9 and the third was -4-pretty good for never having played the course before.

It was a great day on the Monterrey Peninsula and a great experience for the team as they prepare for the next tournament in Stockton on October 25.