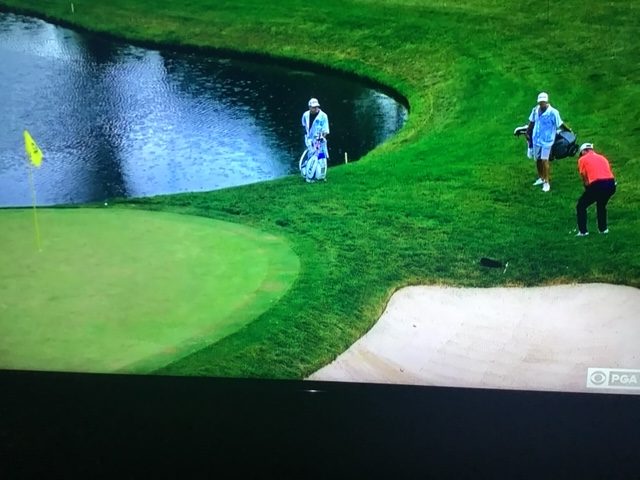 The Memorial Tournament was played in Dublin Ohio on the same course (Muirfield Village) as the previous week’s workday event. It certainly didn’t seem to be the same as the course was far more difficult than the prior week. In the final round only 2 players broke par with Matthew Fitzpatrick climbing to fourth place with a final round 68. The greens were pretty hard and the pins were in positions that were difficult to pursue. This is a Jack Nicklaus’ signature course and fairways and greens are being completely torn up after the tournament for replacement with some design changes. Workers had already started on the project on the front nine while the players were on the back nine on Sunday. Jon Rahm survived a 41 on the back nine, which included a 2 stroke penalty on the 16th hole when his ball moved at address before his delicate pitch shot (which he holed!). It was an interesting call by the PGA Tour officials because a TV replay of the shot disclosed that the ball moved ever so slightly after Rahm addressed it. Rahm could not see that the ball had moved and it took the technology replay to disclose the movement. Rahm was surprised to find out from the CBS interview reporter that he was being assessed a two shot penalty and it’s a good thing he found out before he signed an incorrect scorecard, which would have deprived him of victory. Runner up Ryan Palmer could not mount a charge to overtake Rahm and neither could anyone else. Third round leader Tony Finau continues to struggle in final rounds as his lead evaporated quickly with a 42 including a triple bogey on the sixth hole. Tony has the game and eventually he will get over this hump in a major event down the road.

We now turn the focus of this event to someone who didn’t even make the cut. It is the swashbuckling, hard charging almost Superman-like Bryson DeChampeau. It seems that he should ditch all of the logos on his shirt and cap and darn a cape and a big blue Nike work out shirt with a big “S” emblazoned on the chest. DeChampeau is turning PGA courses of 7,500 yards into “pitch and putt” venue. We used to marvel at the power of John Daly and Jumbo Ozaki but they would be at least 50 yards behind DeChampeau these days. DeChampeau started the tournament with a 403 yard drive and followed these drives up with a number of 350 yard+ bombs. It seems to me that Dechampeau still has to figure out how to harness all of this power into one powerful force. He seems to have so much confidence and so much swing speed that it appears that he is playing too fast to concentrate on the short pitch shots. It came to a head in the second round at the 15th hole. He was 1 over par for the tournament with a few holes to play with the cut line looming at 3 over par. He drove the ball into a hazard on the left on the par 5 hole. Instead of hitting almost any short iron back into the fairway for a comfortable 4th shot to the green, he took a mighty cut from his drop in the scrub and knocked it out of bounds on the right across the fairway. Of course, he decided to “Tin Cup” it and grabbed another ball and smashed it again coming to rest against an iron fence with the ball more than half out of bounds. After a ten minute debate with a rules official, Bryson gave up took another drop and ended up with a 10. This set of decisions would be the end of his tournament as he finished 6 over par (5 over on the 15th) to end his opportunity to play on the weekend. It was interesting to see his demeanor throughout this predicament. He seemed to be “burning” inside but didn’t emote externally to his credit. This experience has to be a significant learning event for DeChampeau–something he will remember for the rest of his career and hopefully never repeated. 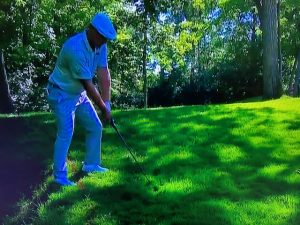 Bryson’s second shot on the par 5, 15th-after hitting it out

Shivas Irons finally returned to Corona and the board of directors was very pleased as his reputation for unlimited meandering has preceded him. Shivas decided that he needed a round of golf and as daybreak broke, he headed off to the first tee. He would do some of his best thinking about next steps at reopening the Club and the Golf Course in his walk around the course. Shivas headed for the back tee and smashed a perfect drive down the middle of the fairway. He hadn’t picked up a club in over 3 months but golf comes naturally to Shivas. He has the most fluid swing and golf mechanics that any professional would die for. He has the focus of Jack Nicklaus and the tenacity of Tiger Woods but he seems to be above any level of professional competition. Shivas zips around the course and shoots 68 with an unflappable attitude–it wouldn’t have mattered if he shot 88 in his mind but his skill set simply won’t allow for that eventuality. It’s Monday and Shivas is thinking about preparing for his conversation with the Board of Directors this coming Thursday on reopening the Club and the Golf Course. He’s ready for a late breakfast following his round and his cell phone rings. It is Donald Trump and after the normal exchange of pleasantries, Trump asks Shivas if Corona can host the British Open for 2021. Shivas immediately replies that the event is called The Open Championship not the British Open and that Corona is not even located in the United Kingdom. Besides, the R&A determines where the Open Championship is decided by year. Trump drawls, “not any more, after I bought Turnberry–I decided that I would take over the R&A as well and they decided to sell the rights to the British Open’, said Trump. Boris Johnson needed the funding to close his budget gap in the wake of the pandemic and Trump was able to persuade the US Federal Reserve to finance the project. All of this is giving Shivas a big headache and his great golf round is already a forgotten memory. Shivas is waving his arms and putting the phone on speaker tells Trump, “Aye, Donald…tis not possible to conduct any tournament let along The Open Championship.” amidst Trump’s cries of “Let’s Make A Deal.”

Things only got a little worse after that phone call, as someone, no one has taken responsibility yet, has installed a new practice putting green at Corona shown below. Shivas is appalled–he has a lot of work to do before Thursday. 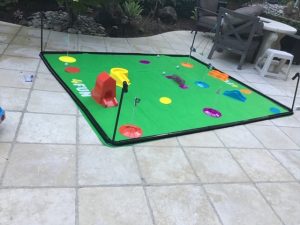 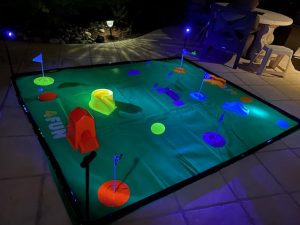 The new practice putting green for Corona at night