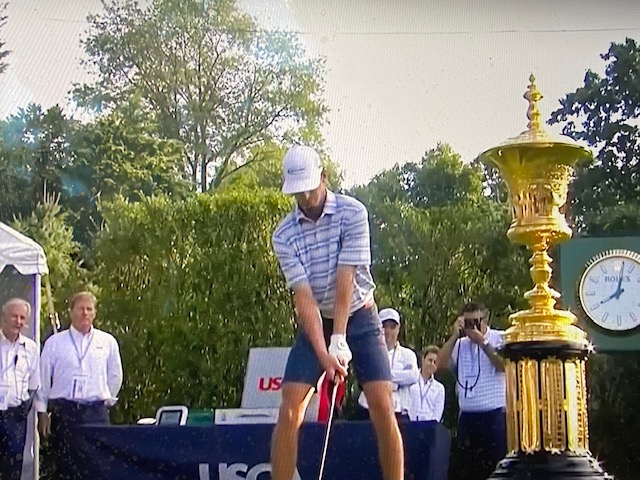 Last Sunday marked the completion of the 122nd playing of the US Amateur Championship which was held at Ridgewood Country Club in northern New Jersey.  The US Amateur has to be the most difficult golf tournament to win as anything less than your A game isn’t going to get it down at this level.  Competitors have to grind through qualifying, and then survive a field of 32 players in match play to get to the Sunday final.  Ice water is flowing in the veins of these players as they have to have to play well and get a few breaks along the way.

The final match pitted Sam Bennett from Texas A&M against Ben Carr from Georgia Southern.  Bennett is ranked the number 3 amateur player with Carr at number 70 so Bennett would assume the favorite role for the championship.  Bennett is a slow player and can be annoying to his opponents which can work to his advantage in match play.  Bennett reminds spectators of the antics of Sergio Garcia with multiple waggles, grip adjustments and a number of other annoying gestures.  This type of player can be distracting in match play but Carr would maintain significant focus on his task at hand and was unbothered by Bennett.  The championship match was a real grind as Bennett confidently grabbed a 3 up lead after the first 18 holes, shooting 68 while Carr shot 72.  Carr was not about to give up and was matching Bennett shot for shot as they approached the 13th hole.  Bennett decided to go for the green on the par 5, 551 hole and smashed a 3 wood out of bounds.  The door was open for Carr to pounce on this opportunity, win this hole and cut the deficit to 2 with 5 to play.  Carr had 270 yards to the green and for the life of me, why wouldn’t you lay up to a comfortable pitching position and tuck this hole away.  But nooooo…he decided to go for the green as well and followed Bennett out of bounds as well where they ended up having the hole and Carr lost a major opportunity to get back into the match.  On the 14th hole, Bennett presented yet another gift to Carr missing a 2 ft. for par to give Carr that hole to cut the deficit to 2 (could have been 1).  You could almost see the pressure exuding from both of these guys as they played the final holes as they matched shot for shot.  Carr rammed in a difficult birdie on 17 and Bennett could not counter with his 12 footer–lead is now done to 1.  Carr clearly had the momentum as they arrived at the 18th tee.  Unfortunately for Carr, he flared his tee shot into the right rough on the 464 yard, par 4 finishing hole at Ridgewood.  It would be difficult to hit a shot to make the birdie that he had to have to potentially send the match into a playoff.  Bennett came through and striped his drive right down the middle of the fairway where he would have a routine short iron to the green for an easy opportunity to make par and claim the trophy.  Carr’s approach shot was pretty good from the rough but he would miss the 20 ft. putt for birdie and Bennett had an easy two putt par for victory.  Bennett’s drive was a terrific shot under pressure as he came through confidently as he needed to.  For Carr, it was a terrific performance as he never gave up, never got distracted (even after the debacle on the 13rd hole) and pressed on Bennett to the end.  It was a terrific performance by both guys in an exciting display of competitive golf.