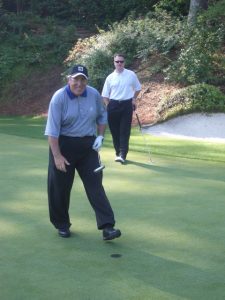 I was surprised to learn that a little known publicized event is about to occur.  On April 4, 2018 Augusta National announced that it would support a global women’s amateur event on the week preceding the annual Master’s Tournament.  The first two rounds of the Tournament will be played on two nine hole courses dubbed “Champions Retreat.”  The girls will then play a practice round at Augusta National and then play the Final Round on Saturday, April 6–a week before the 3rd round of the regular Master’s Event.

The competitors will be the girls who have won significant tournaments in the US or in their native country coming together as 66 participants to play in a global girls event at a fabulous venue.    The field will play 36 holes at the Champions Retreat,  and then there will be a cut reducing the field to 30 for the final round on Saturday.  This is the inaugural event and the winner will get to play in the 2019 LPGA majors such as the US Open, British Open and some of the other events as well as to come back and defend their championship in the next Augusta National Women’s Amateur.

This type of event is a boost for golf and women’s golf in particular.  The game continues to suffer participation issues with the current generation of millennials who, in general, can’t seem to relate to the game.  This is a tremendous gesture by the Augusta National Golf Club to support the women’s game and the game of golf.    It wasn’t too long ago that the Master’s Tournament was being picketed by women protesters accusing the club of sexual discrimination.  Indeed they had a point and there are women members now at Augusta National including former Secretary of State Condoleezza Rice.  LPGA greats representing the globe are Nancy Lopez (USA), Lorena Ochoa (Mexico), Annika Sorenstam (Sweden) and Se Ri Pak (South Korea) who will hit the inaugural first tee shot of the event in the similar tradition as the Masters.  Bay Area native Lucy Li has qualified for the event.  Lucy qualified for the US Women’s Open at age 11 and she is now 16 and has a number of impressive accomplishments in her budding career as an amateur.

I would guess that Cliff Roberts, co-founder of Augusta National, would probably never buy into this concept and is probably fidgeting in his grave.  On the other hand, it seems that co-founder and probably the best player to ever play the game, Bobby Jones, would have endorsed this effort.  We’ll never know how long it took to get over this hump and I would have never expected it to happen anyway.  The fact that it has happened and that it is supported enthusiastically by Augusta National can only be viewed as a positive for the game, positive for women’s golf and most important positive as a significant gesture to promoting the skill of women players throughout the world.  “These Girls Can Play.”

The event will be broadcast by NBC with extensive coverage by the Golf Channel throughout the event.  NBC is rolling out the first cabin of announcers and these guys are the best–it is too bad that Johnny Miller retired and won’t be here but Paul Azinger will eventually develop into a first class commentator now that he is away from the incompetence of Fox.

It should be a very enjoyable event and, at least, you should get your DVR machines rolling since it is also Final Four weekend so I’m sure ratings will suffer.  Augusta National is committed to this event but it will always face Final Four weekend in this time frame if they want to continue to hold it a week before the men tee it up at the Masters.

Tiger Woods lost his match on the 18th hole in the WGCC Match Play Event at Austin Country Club in Austin, Texas with a putt that lipped out for bogey.  He was beaten by Lucas Bjerregaard.  Bjerregaard trailed for the entire match until he halved the match with an eagle on the 550 yard, par 5, 16th hole.  On 16, Bjerregaard’s drive was 35 yards behind Woods but his four iron found the green about 25 ft. away.  Woods had 208 yards to the hole and hit a good shot but it lay outside of Bjerregaard’s ball on the green.  Woods had to putt first and certainly gave Bjerregaard the line of the putt.  Woods putt fell 3 ft. short and Bjerregaard studied the line well and holed the putt to halve the match.  Both players played very well in a hard fought match.