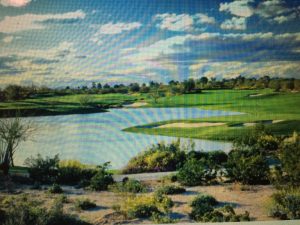 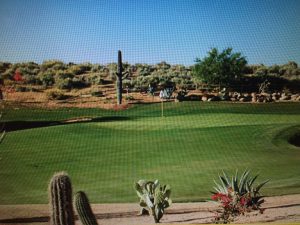 Spent the weekend in Scottsdale, Arizona area.  My friend, Jack Cook, and I played the TPC Champions Course on Saturday and Grayhawk on Sunday.  The Champions course is adjacent to one of my favorite venues–the TPC Stadium Course.  We couldn’t play the Stadium course since preparations for the PGA Tour Event–the Waste Management Open were well underway.  The Waste Management or Phoenix Open is the largest event on the PGA Tour in terms of attendance and the infrastructure required for this event is astounding.  Attendance per day is currently averaging over 150,000 fans/day which is amazing.  We witnessed the intense preparations for the event on Saturday as attendance records in 2017 may shatter the existing record of over 600,000 for the four days.  I used to play in the pro-AM event at this venue when it was sponsored by Motorola.  Motorola put on a spectacular series of event when the company was the then cell phone leader (pre-Apple I phone) and telecommunications giant.  Times change and Motorola actually got out of the cell phone business once Apple and Samsung came into being with their product offerings.  In 1996, there was a very special Phoenix Open Pro Am which was called the Charity Cup sponsored by Motorola.  Super Bowl XXX would be played on the same day as the Phoenix Open Pro-AM, the only time that both the Super Bowl and the Phoenix Open Pro-Am would be played on the same day.  I remember the event fondly as I was blown away when I proceeded to the driving range with Tom Watson on my left and Nick Faldo on my right warming up at 7AM in the morning.   I would play with Dan Marino and PGA professional Dan Pohl on that day.  I was following a group that included Jerry Rice and John Elway.  All I can remember that day was the first tee with over 2,000 lining the fairway for the first tee shot.  My fellow amateur, a Motorola senior executive who will remain nameless, dribbled his tee about 50 yards as he was a total basket case with all the fans.  I proceeded the hit my drive about 240 yards down the middle and all the “heebie jeebies” left as Dan Marino slapped my hand in encouragement.  The event was also covered by ESPN and I made my TV debut as an amateur golfer as I holed a 30 ft. putt on the 13th hole for a birdie.  When the tournament was over, we were “helicoptered” to the Super Bowl site in Tempe in a brand new McDonnell Douglas chopper.  I was told that 4 choppers were sold during this event.  Personally, I’m am petrified by helicopters and was a total wreck with that 15 minute ride–Linda thoroughly enjoyed the ride and laughed as I chewed on my nails throughout the short flight.

The Champions Course is reasonably challenging and the greens were in superb condition.  On Sunday, we moved to the venue at Greyhawk which is a very nice layout with 36 holes.  We played the Raptors course which is a beautiful layout and the greens were as good as Champions and a little more difficult to putt with the pin positions that were offered today.  I wasn’t too happy with the 18th hole at Grayhawk, Raptors and it reminded me of a terrible hole at the K Club in Ireland.  The 18th is a par 5 of some 500+ yards with a water hazard about 260 yards from the tee.  This fairway slopes toward the water and as I found out-every shot hit in the middle of the fairway may move 35 yards into the water hazard.  There is a huge bunker about 245 yards off the tee on the left side so between the water hazard on the right and the bunker on the left, there isn’t a lot of fairway to hit.  I elected to drive the ball to the right because I know I couldn’t hit it 260 yards.  I would have to maneuver my second shot over the water into the fairway for an approach shot.  I hit the drive about 235 yards and moved up to hit a 4 iron for safety sake to leave me with a reasonable approach shot into the hole.  I hit a crisp 4 iron into the middle of the fairway and the ball almost ended up in the water despite being at least 40 yards from the hazard.  I only had 78 yards left and I elected to hit a pitching wedge because if I selected a 56 degree wedge to get close to the hole, it might be short and the green slopes to such a degree that the shot would end up in the water-I hit the wedge crisply past the pin to the back of the green leaving me with a 40 foot putt.  I two putted for par but my playing partners were not so lucky, they hit great shots to the green but both shots ended up in the water after landing on the green–this was unfair–a well hit shot that lands safely on the green shouldn’t end up in the water.  This may be a good candidate for the “disliked” holes that will be published in Golf Chronicles II.