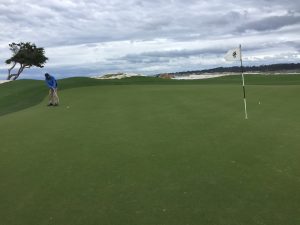 For me, Super Bowl Sunday is similar to New Year’s Eve–enforced gaiety.  People who haven’t watched a football game all year congregate with chips, dips, beers and spirits for an event they have little care about and probably don’t even know the teams that are playing.  Nevertheless, it’s the national pastime and my value judgments are completely irrelevant.  However, I take advantage of this situation by playing golf at Monterrey Peninsula Club with a 1:00PM tee time so as to coincide with the convocations that are beginning to assemble elsewhere.  My friend, Jeet Harika, and I have been doing this since I attended my last Super Bowl in Glendale, Arizona.  I’m a huge Giants fan and was present for the modern day Immaculate Reception that beat the New England Patriots in Super Bowel XX or LL (whatever). There is almost no one on the course and we can play as fast as we can.  The idea is to complete the round by halftime.  We then retreat to MPCC’s Dune’s Shelter for our late afternoon meal and catch the half time show.  Today we showed up at the Shelter with 12 seconds left in the first half and a round that took 3 1/2 hours walking.

This year was no different.  We played into the teeth of a 25 mph wind which seemed to get stronger as the day wore on.  It was a 2 club wind for most of the day and some of the longer par 4 holes, I conceded trying to make par by hitting shorter irons to keep the ball in play at all times.  All of this worked pretty well but the putter didn’t cooperate today and I ended up shooting 80 but playing much better than that–so it is-in golf.

The only hole that was down wind was the tough par 4, 6th hole which is a dogleg to the right.  Usually I have a shot of over 200 yards into the green but today it was 175 and we recorded a fairly easy par.  The same thing happened on the long, par 4-12th where I only had a 6 iron into the green.  The  wind on the signature 14th hole on the ocean was howling and the temperature must have have dropped 5 degrees.  A shot of 155 yards needed a five iron into the teeth of this wind to keep the ball in front of the pin.

Of course, the football game has been a blowout but the Patriots are coming back here at the end making it a memorable game 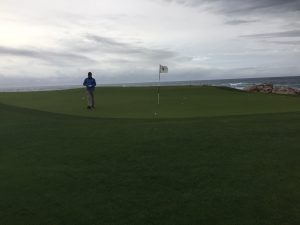 …..the Lady Gaga show was the best thing about this event today.  If I could have made some birdie putts, it could have been a special day but every golfer has this lament throughout their career.

This is Golf at its finest–tough conditions, great course, no players…………….