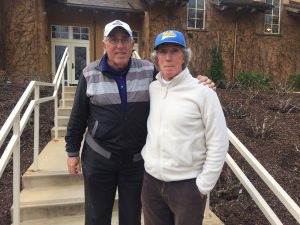 Outside the Cordevalle clubhouse with Mac O’Grady 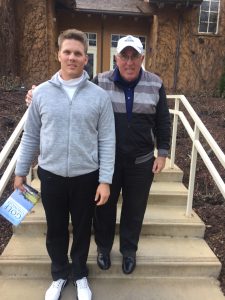 Anders at Cordevalle with his copy of Golf Chronicles 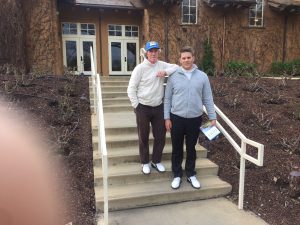 Following more torrential rain in Northern California the previous day which lasted into the evening, we decided to show up for our Saturday, 9AM tee time at Cordevalle GC in San Martin, Ca.  We really didn’t know what to expect as we knew the course would be very wet, the question was would it be playable.  The day was special as we were joined by PGA Professional, Mac O’Grady and Anders Kristiansen, a budding European player.  We met on the range at 8:30 and Mac and Anders were already there warming up.  The incredible part of these guys is that both of them play right-handed and left-handed and hit the ball about the same from both sides.  Mac took a look at my swing and gave me a few tips regarding stance and ball position.  OMG–I started hitting the ball further than I could have imagined and straight as a string.  The key will be to repeat these points and not revert to bad habits.  We started out at 9:15AM and the two professionals decided to play the very back tees.  Cordevalle is over 7500 yards from the back tee.  On this day there would be no roll as the ground was completely saturated although the fairways were walkable.   Not only did they play from the back tees, they went as far back as possible on those back tees so I believe they played the course at 8,000 yards-with the absence of roll and really wet conditions, the course had to have played 8,200-8,500 yards.  We played from 6,500 yards and they were outdriving us.  It is so impressive to see and experience the skills of the professional up close and realize that they hit the ball perfectly.  The professional has to have the skills to hit a shot on demand–high trajectory, low trajectory, left, right, cut or hook-whatever the condition demands.  The difference in winning on tour or not comes down to short game skills and number of putts holed.  Anders has all the tools, drive and attitude to be a successful tour player and is looking for an opening to take advantage of his significant skills.  Today Anders shot 72 in these horrible conditions with 2 birdies, 2 bogeys and 14 pars–it could have been 66 if he had made a few more putts.  The putts he missed were close and , on other days and conditions, might have gone in.  Mac couldn’t beat him on this day and my partner had a fabulous round of 79.  I made only one putt all day and ended up with 82.

Mac has had a fabulous career as a Tour winner and teacher and had numerous wonderful stories with all the greats that he has competed with as well as the celebrities and personalities he has known throughout his life.  It was a terrific day and one we hope to repeat.  Anders has tremendous skill and we wish him well as he continues on his journey to participate in professional golf.