On a glorious California sun-filled day, Jordan Speith won the AT&T Pro-Am by four shots.  Newspapers and media will report this victory as just another easy conquest by Speith who was never seriously threatened in the event.  Speith started his fourth round with a six shot lead playing with Brent Snedeker,  a wily veteran and multiple winner on the PGA Tour.  Even if Speith shot even par 72, if Snedeker could carve out a 65 or 66 in this final round, Snedeker  could come out on top.  The rest of the field was too far back to mount a serious challenge to Speith—there was some great golf played in the field but no one could come from 7-9 shots back.  The task of winning an event with a six shot lead is a lot more difficult than it seems.  The PGA professional combines the god-given physical talent and swing mechanics with the psychological mindset of competitive instinct and experience that are required to achieve victory.  The psychological mindset and all of its variables are the difference makers in golf at the professional level.  All competitors have the similar or virtual capabilities of ball striking but its the ability to putt and stay focused on making no mistakes is critical to coming out on top.  Speith put on a clinic today as to how to hold a lead and stay focussed on error-free golf or as close to it as possible.  He could have become pretty frustrated as he missed a number of birdie putts on the front nine that could have eliminated any and all competition but those putts did not drop.  On the back nine, he started to lose his tee shots to the left and received a few gratuitous bounces and gifts from the golf gods (all deserved) to keep his ball in play with available shots to the green.  The ability to repeat the golf swing when no one is really challenging you creates another distraction in itself since the pressure of the moment ebbs and flows.  Snedeker could not make any putts either to put some pressure on Speith but it seemed that he was always lurking.  After Speith barely missed the fairway bunker on the 13th hole, the ball trickled through it giving Speith a shot at the green, Snedeker belted his tee shot into the right bunker giving him no real shot at birdie.  As usual for Speith, his putting stroke was sharp again and he continued to convert the pars and finally holed one on the 17th for a birdie.  It was finally over and the 18th was a mere walk in triumph.  Speith just wins impressively with true grit, determination and respect for what might go wrong.  He looks like he could be rounding into form for another shot at the Masters that he squandered in the final round of 2016.  I’ll bet those psychological variables created in April 2016, have added some scar tissue to his 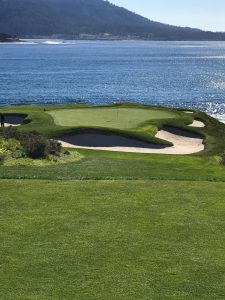 7th hole at Pebble on a brilliant day

experience base as he starts to contemplate the rest of 2017.

Kudos to Cordevalle professional, Ray Otis, who completed the event on Saturday missing the professional cut.  Ray was out there competing with the best players in the world while working daily as a Director of Golf at the Cordevalle Golf Club.  His ability to practice and play and compete with these guys is not what he has chosen for a career, but he has the capability to compete at this level which is frankly amazing.  Ray hit some pretty wonderful shots out there and really demonstrated the capability that enabled him to qualify for the event as one of the best club professionals in California.  I hope he makes it back next year.