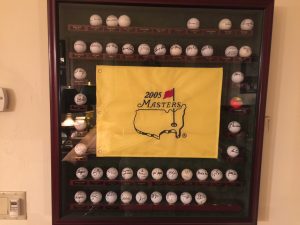 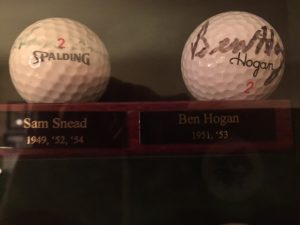 It’s Masters Weekend and the first two rounds are complete with blustery windy conditions.    The wind and cold had a significant impact on the field with fewer than 10 contestants breaking par.  This is the first Masters without the presence of Arnold Palmer and the opening first tee ceremony honored him and there were enough tears to go around including fellow legends Jack Nicklaus and Gary Player.  It was a wonderful moment as Nicklaus at age 77 blasted a tee shot down the first fairway perhaps besting the 81 year old Player by a few yards.  Arnold would have loved to have seen it.

The leaders in the clubhouse are Sergio Garcia and Charlie Hoffman.  Hoffman, hails from San Diego, and has a good Masters record.  He had an amazing back nine getting iron shots close to the holes for birdie opportunities on the back nine shooting 65 in the opening round.  He faltered a bit in the second round with a 3 over 75 leaving him at 4 under for the tournament tied with Garcia.  Sergio has never won a major and has been close many times.  Perhaps this will be his time.  He is striking the ball very well and making chips and putts around these treacherous greens and there is hope that he can continue to do this for the last two rounds.  His putter on day 4 has usually been his demise in major events.

The biggest surprise for me in the event was the difficult of the par 5, 15th hole which the contestants believe is a birdie hole and also presenting an eagle opportunity.    The conditions for the first two days with wind and cold prevented the contestants from going for the green in 2.  Most of them had between 240-260 yards to the green as tee shots were not running as they usually do in this generous fairway.  In past years, contestants have driven the ball over 300 yards leaving them iron shots for birdie and eagle opportunities.  In the first two days, the pond that surrounds the front and backside became a factor in these conditions.  A shot that makes the green but doesn’t carry far enough forward will spin back into the pond’s watery grave.  A shot that carries the green and goes over faces a very difficult pitch back onto the green which can result in  a three putts or worse.  Jordan Speith, my favorite to win the tournament, discovered this problem on the first day when his shot to the green of some 250 yards spun back into the pond.  His penalty pitch shot flew the green and he recorded a calamitous 9 for this hole.  No player that has recorded a higher score on a hole than 7 has ever won a Masters but Jordan still has a chance.

Today, the players will face a different golf course.  The wind will be way down and not a factor but the greens will start to harden and putting will be extremely difficult as it usually is here.  The tournament is wide open and I believe the winner will come out of the pack on Sunday.  We’ll see how it develops but it should be an exciting conclusion.