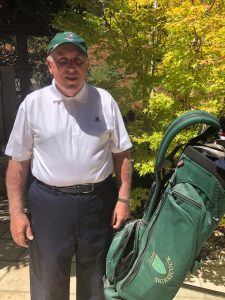 Brooks Koepka won his second consecutive US Open title at Shinnecock Hills and becomes the first player since Curtis Strange to win back to back titles.  I hadn’t expected Koepka to win here at Shinnecock for two reasons:  1.  It is an improbable event to win back to back titles.  2.  Brooks is a long hitter and bomber of the golf ball and I felt that if he missed a bunch of fairways, his short game couldn’t compensate for that eventuality.  I was certainly wrong about that as Koepka’s short iron play and clutch putting saved him from most trouble.  He simply defeated the rest of the field that couldn’t rise to his level when it really counted.  A significant turning point came on the par 3 11th hole when he airmailed the green and landed in the gnarly rough behind the green.  Patrick Reed, a few minutes earlier, had done exactly the same thing.  Reed’s chip up the treacherous hill slammed the flagstick or else it would have gone off the green or landed in the greenside bunker.  Reed bogeyed the hole when he missed his putt coming back but at least he had a chance.  Koepka knew he had to cover the hill with his chip shot but he also knew that the ball would run away from the flagstick toward the greenside bunker.  He actually played to put the ball into the bunker and there it was.  He hit a pretty good bunker shot to get to the 8-10 ft. level and then drained the putt for a miraculous bogey.  He could have made a double or other and shoot himself out of the tournament.  Another clutch putt on 12 for par and a terrific birdie on 16 cemented the victory.  The birdie on 16 was spectacular as he drove the ball into the rough and smashed it out to about 100 yards.  An approach shot to 3 feet secured the birdie.  Tommy Fleetwood was the only player to come out of the back and tied the US Open record with a 63.  The last 63 was shot by winner Johnny Miller at Oakmont Country Club in Pittsburgh many years ago.  Fleetwood had an 8 foot birdie putt on 18 but the gods of golf decided that the record would stay intact and that Koepka would survive this significant US Open test.  Dustin Johnson played extremely well tee to green on Sunday but just couldn’t make a putt that mattered as his birdie putt that dropped on 18 was almost an insult as he lipped many a cup in the final 36 holes.

Shinnecock Hills was set up properly on Sunday and many observers felt it was set up too easily after Saturday’s debacle when the course became virtually unplayable.  The USGA had to water the greens and insure that the track was fair for Sunday with so many players in contention.  The 3rd round letters had emerged from 46th to tied for first as they had placed the course on Saturday morning when the winds and greens were more benign as each player shot 66.  Tony Finau and Daniel Berger found themselves in the last group and they didn’t provide much attention with their Sunday lackluster rounds.  Finau recovered a bit to make a final push to finish 5th.  Patrick Reed was a factor until the back nine where he ran out of gas with the flat stick and posted a 2 under 68 to finish fourth.  I though Henrik Stenson played brilliantly and I felt was the significant victim of the Saturday course disaster as many of his shots ended up in places that were undeserving of his play.  Justin Rose couldn’t hit a green on Sunday but his short game was masterful up to a point in the back nine where he also succumbed to shoot 3 over 73.

The Fox broadcast was horrible and I can’t imagine where the producers were as Azinger continued to articulate a series of non sensical analogies that came across like “fingernails on a chalkboard.”  Joe Buck was his usual horrid self and maybe needed Troy Aikman to help him as he continued to flip/flop over the proceedings.  Curtis Strange, a refugee celebrity from ABC, gave the broadcast its best stuff and distinguished himself among the rabble of Foxians.  As the last two time consecutive winner of a US Open, he was classy in being one of the first to congratulate Koepka on his achievement.

I’m still scratching my head as to how Phil Mickelsen could run after a moving ball and hit it back to the hole.  He was out of the tournament anyway in terms of contention and why wouldn’t he take his medicine and let the ball roll off the green and play it out.  He claimed he was taking advantage of the rule and thought he would make more than a 10 when he hit the rolling ball.  It was one of the most amazing things I’ve ever seen in a major championship.  He should have been disqualified under Rule 35 for hitting the ball intentionally but the USGA decided he had been punished enough with the 10, it was his birthday and they wanted him to play the final round in front of his adoring New York fans.  This action set a horrible example for the kids we are teaching to play the game especially from some one of Mickelsen’s stature in the game.  You would have never seen Nicklaus, Palmer, Watson even conceive on doing such a thing.  Phil should have disqualified himself and set the right example.  It’s certainly a judgment call and the key item is that it didn’t matter in the tournament and Phil will have to live with this stigma for the rest of his life which is the worst punishment of all.

What follows here is a day by day evaluation of the key events.

The course was very difficult on Day 1 and big names in the event had significant difficult as Tiger Woods shot 78, Rory McElroy 80 and Jordan Speith 78 as examples.  The entire stroke average for the field on Day 1 was 76. (6 over par).  Par was the standard today and Dustin Johnson was in at -2.  Fourteen players were within 2 shots of the lead.  The players are playing a 252 yard par 3  second hole, and a 526 yard par 4, 14th hole.  The course is at least 500 yards longer than the 2004 event.  There are a number of potential birdie holes but the wind reduced that possible significantly during this day.  Of course, the Fox broadcast is horrible but Ken Brown supplied some very interesting insights of some of the holes and the setup.  Brown is a classy guy and a terrific spokesperson for golf.

The USGA is saved.  It rained a little during the night and the wind is blowing as hard as Thursday.  It will be tough but scoring would improve today and it did.  Dustin Johnson played another almost flawless round and stretched his lead to 4 shots.  Tiger Woods refused to give and birdied the last two holes to get to +10 which at the time looked like the cut line.  Unfortunately the course played a little easier in the afternoon and the cut line moved to +8.  Jordan Speith was at +8 with two holes and bogeyed the last hole with another unforced error causing him to miss the cut.  Speith was very frustrated as his putting woes seemed to be improving and with the conditions of the event, anything was possible if he could have survived the cut.

The inevitable happens-the USGA loses the golf course in the afternoon as the wind and dry conditions accelerate and the players could not find these difficult pin positions.  Daniel Berger and Tony Finau shoot 66 in the more benign morning conditions and move from 46th in the event to tied for first.  The professionals looked silly as balls were bouncing everywhere and falling off greens into bunkers.  It’s a shame that the USGA can’t figure out how to set up this great golf course consistently.  Fox made a huge issue of the Mickelsen “slap shot” and sent Curtis Strange to interview him after his round.  Mickelsen’s responses were true enough but his reputation has been tarnished by this episode.  Joe Buck was at it’s worst conjuring up all types of implications that very few people will think about after this event.

The good news was that the USGA relented and set up the course where the pins were accessible for scoring.  Scoring improved significantly but the course was still very difficult as only Tommy Fleetwood would come out of the pack to pose a significant challenge to Koepka.  Dustin Johnson couldn’t challenge Koepka on this day as his putter deserted him on the final 36 holes.

Perhaps the USGA has added another learning foundation to course setup for the next US Open at Shinnecock Hills in 2026.  There will always be wind at Shinnecock and its time to recongize that when the course is set up.