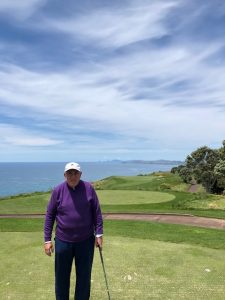 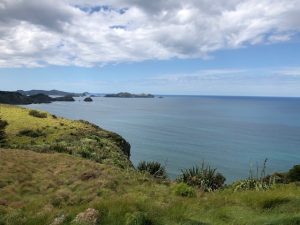 View from the 17th tee box 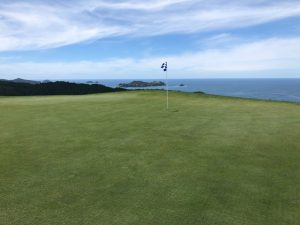 shot into the signature 14th hole

I’ve played 3 rounds at the Kauri Cliffs golf club and the word “cliffs” is clearly operable.  The course is impossible to walk in my view but there are some brave souls that do it with a push cart or a caddy.  There’s lots of distance between the holes and significant drops and upslopes.  While the course seems to be a resort course, there is plenty of “bite” for the good player with three sets of men’s tees measuring from 6100 yards to 7100 yards.  I played from the 6,500 yard tee box which created plenty of challenge.  I am having trouble with my brain on the par 5, 4th hole which is 522 yards.  The tee shot demands something in the middle of the fairway which is quite generous so this isn’t the problem.  The second shot requires something down the left side of the fairway as the green is way to the right as sort of a miniature dog leg.  There is a significant price to pay for hitting the ball to the right as the fairway ends and some nasty brush and trees will make anything hit near there virtually unplayable.  This is actually visually easy to see but I keep hitting the approach shot to the right with either a 3 wood or hybrid club and scrambling as the ball heads into a thicket of brush.  There is plenty of room here not to do that but I’ve just about given up so next time it will be a 5 iron down the left side of this fairway.  The second toughest hole is the 441 yard, par 4, 17th hole which, in my view, is almost a virtual copy of the 12th hole at Old Head in Ireland.  The prevailing wind makes this even tougher since it’s virtually in your face all the time.  One day I played it down wind and only had 150 yards in–most of you know that I do not drive the golf ball 291 yards.  Overall, I must say I like the course very much especially the back nine where every hole is completely different giving you a wide variety of shots to play.  The par 5, 15th is particularly beautiful at 513 yards as it straddles the coastline as you start to come in to the clubhouse.  The 6th, 9th and 18th holes are straight uphill significantly adding yardage to the approach shots that you have to hit.  I found the greens to be quite good and, of course, I’m saying this because I’m putting well here but they are true and fair (probably around 10 on the stimp).  This is not a course for beginners and I would highly recommend that the high handicapper play from the 6100 tee markers where most of the trouble on the course can be visually eliminated (not all-but most of it).  The long hitter can score well on this golf course.  I played with one of the professional staff who played the front nine from the white (6500 yard tees) and shot even par.  He decided to play the back nine from the Tiger tees and shot 5 under 31.  On the tenth hole, he almost holed the tee shot from 364 yards.  It was fun to watch this as he crunched drive after drive over 320 yards.  This is going to happen to me when I am reincarnated.  I was curious that the course rating from the white tees that I played was 138 which I thought to be a little curious.  Pasatiempo Golf Club has a course rating of 137 and Pasatiempo is clearly more difficult that Kauri Cliffs.  Kauri has many strong holes but when you think of Pasatiempo’s layout–the 1st, 3rd, 10th, 11th and 16th are much harder that anything Kauri could throw at you.  There must be some different criteria between course ratings between the United States and New Zealand.  All this being said, I am really enjoying playing Kauri Cliffs and highly recommend it to all players regardless of skill level as long as you play the right tee boxes.

Finally, we had some pretty good responses to the poll and there were only 2 people out of 25 responses that said that they would pay and watch the Tiger/Phil match this coming weekend.  I won’t be one of them and was surprised that any of you would bother.   Most of you predicted a Tiger victory probably due to Mickelsen’s poor Ryder Cup showing but he did play well at the event in California last month.  In any event, it’s a sad commentary and I don’t think it will do anything to enhance the game of golf.

Many of you had some wonderful experiences in golf in 2018 and congratulations to all on these achievements.  Some of the responses ranged from “I get my first par ever” to making the cut in the Dunhill Cup at the Old Course in St. Andrews which had to be really cool!  Many of you talked about your successful endeavors with charities benefitting kids using golf as a medium.  This is one of my continuous objectives in writing about golf and trying to make an impact on the sport as we head into 2019.