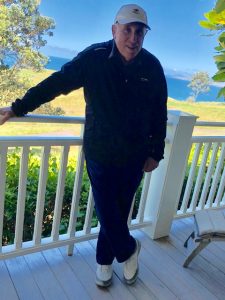 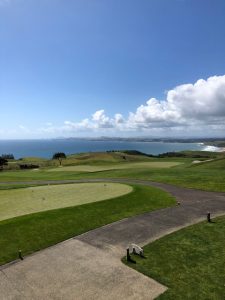 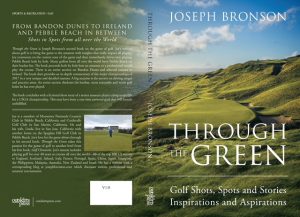 Well we finally made it.  It almost took us more time to get to Kauri Cliffs, New Zealand from Melbourne, Australia as it did from San Francisco to Auckland.  I won’t elaborate about this trip as we’ve all had our travel miseries.

Kauri Cliffs is at the north end of New Zealand and this region is known for its honey “Manuka” which is a burgeoning industry here in addition to forestry and logging for fine wood products.  The resort itself is set on a land mass of over 6,000 acres roughly 30 Fairfield University campuses in my world.  I also thought it was interesting that the Chinese have now been prohibited from buying existing housing and now they must buy and build on purchased land.  The local authorities felt this was necessary to stop the upward pressure of housing prices–maybe there’s a lesson in there somewhere for us.  However, this is supposed to be a golf column and not a social political posting so we’ll move on from here.  This place is absolutely gorgeous with 14 holes with spectacular views of the Pacific perhaps similar to the Monterrey Peninsula Country Club’s Shore Course.The water seems bluer here and more spectacular as the next stop from here is Chile.

I haven’t played yet after the wonderful journey but I did practice today and was surprisingly very pleased with the outcome as everything went straight and true on the range.  I’m sure it will be another story on the golf course tomorrow when I tee off at 11AM.  The course has three sets of men’s tees ranging from 6100 yards to 7100 yards.  I think I’m going to start on the 6,500 yard track which has a slope rating of 138.  This is a bit concerning since Pasatiempo’s slope rating is 137 (gulp!).  We’ll see what happens in the coming days and I’ll provide the details of what looks to be a wonderful track.

Don’t forget the Tiger Woods/Mickelsen match next Thanksgiving weekend. It’s a pay per  view event so I wonder how many of you will be watching.  I won’t be as I’ll be the plane back to San Francisco from here; however,  I would never pay for it anyway.  Golf is not supposed to be the equivalent to MMA.  After their horrible Ryder Cup Experience, they should be paying us to watch them.

The book is moving along nicely without much push from me but I’m there’s many of you that haven’t picked it up yet.  I hope you will as well as another copy of Golf Chronicles as the Christmas season picks up steam.  We starting to get some traction on give back from the proceeds of both books with contributions to The First Tee of Silicon Valley, Forever Young Foundation and sponsoring some golf for the University of San Francisco Golf Team.  All proceeds from the book sales will be plowed back into these and other similar programs with some planned already for 2019.  I have also had  a few very nice things happen since “Through the Green” was published.

The First Tee has highlighted the book in its latest newsletter to their membership with a very nice writeup.  A big surprise was a very encouraging email from a very successful golf author, Tom Coyne, who wrote “A Course Called Scotland” and “A Course Called Ireland.” These books are national best sellers and I enjoyed both of them immensely.  I just finished “A Course Called Scotland” and will write a review on a future blog post.  Tom liked the web site and encouraged me to continue the quest of writing about golf.  I was surprised and a bit “blown away.”

Stay tuned to the next installment from New Zealand as we’ll see if I can take the success on the driving range to the golf course.  Most of you know that rarely happens.