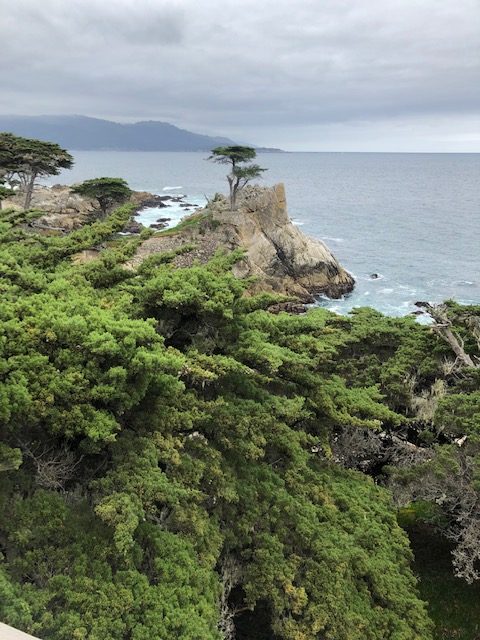 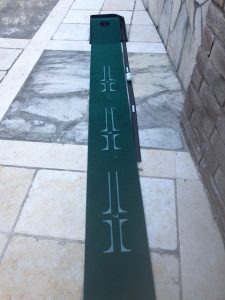 After many weeks in San Jose, we headed to Pebble Beach to change the venue of our shelter in place.  Monterey County is devastated.  An economy that is almost entirely dependent travel and leisure pursuits is virtually completely shut–Pebble Beach Golf Links, Spyglass, Spanish Bay, the Monterey Bay Aquarium and so forth.  The county has logged 138 cases thus far, which seems that the suffering far exceeds the risk but we all know that it’s more complicated.  Seventeen Mile Drive is closed to tourist traffic giving the residents this wonderful place to themselves.  We took the opportunity to see the Lone Cypress tree at the Pebble Beach bluff.  I had actually never seen the Lone Cypress because normally you can’t get near it due to the volume of tourist traffic.  Today we were the only people at the site.  We were a bit surprised to see golfers actually playing at Cypress Point Club.  Monterey County has edicted that the shelter in place includes all golf courses including private clubs.  Cypress is the private club of private clubs and ostensibly only answers to the Almighty.  There are rumors that golf courses may reopen on May 3 for play without club services such as golf carts, food, pro-shop etc.  Social distancing rules may have a major impact on public courses since play will have to be sufficiently distanced such  that the number of daily rounds may be reduced.  In any event, the demand to resume play is substantial so it won’t be easy getting back into play and a lot of patience will be required.  I wouldn’t want to be the club professional when play resumes.

The World Match Play moves to the 3rd hole.  The match is All Square after the first two holes, which took the four players three hours to play.  Trump is yapping at Shivas Irons, that the social distancing rules where each participant plays by himself should be relaxed and that the four players should play together.  Shivas is having none of it, “Ye rules r’ ye rules an we play n’.”  Trump is concerned that his teammate Mr. Kim has destroyed his 1 iron, which is a critical part of his game.  Trump figured that he’d have a new one flown in but it turns out that golf clubs are on the US sanctions list against North Korea.  Trump also wanted to meet and discuss strategy with Kim but the rules forbid it; so a hasty request has been sent to Amazon to get some Zoom applications software installed on the computers in their sheds.  It’s an unnatural alliance as Kim doesn’t want to talk to Trump anyway.  ESPN’s, Scott van Pelt is trying to report on the match but Shivas will not disclose where Corona is located and he can only comment on the status of the match.  Trump is accusing Xi of cheating with his wonderful par on the second hole.  Trump also wants Xi’s Japanese driver inspected.  Shivas exclaims, “Mr. Trump, “Pleas play away.”

The third hole at Corona is a par 4 of 569 yards.  The hole is a dog leg to the left with a distance of 300 yards to the dog leg.  The fairway was pretty narrow with a large patch of rough and gorse on the left.  There is more room on the right but moving to the right lengthens the hole considerably.  Trump struck a mighty blow with the driver but pulled the shot into the gorse on the left.  He trudges up the fairway and starts his approach into the gorse and the ball suddenly appears at the edge of the fairway.  The impossible has occurred….”must have hit a rock” said Trump.  Shivas is besides himself.  He reprogrammed the drones to follow and monitor Trump carefully but once again, the drone programs malfunctioned just as Trump teed off.  Trump nails a three wood to the 100 yard marker, hits an indifferent chip to the green and three putts for a six. “Ay, twas a 9”, Shivas groaned.  Teammate Kim slices his tee shot way right into the woods, he has 325 yards to the green with the pond on the left side of the hole.  Kim shanks a few 5 irons–throws his bag on the ground and storms off the hole for an  “other” for the scorecard.  Chairman Xi, fresh from his success with the Japanese driver, knocks a tee shot right down the middle about 300 yards.  He has 269 yards and decides to “bang it off the deck” with the driver and the ball screams low and on track coming to rest about 15 feet from the hole.  The shot ran on the ground for the last 100 yards and only slowed up due to the recently inserted Corona high rough collar around this green.  Xi takes out the 1975 Ping Zing putter, which was a gift from Trump before Trump imposed all the tariffs.  Xi three putts for a bogey 5, which would be good enough to win the hole.  Putin is still trying to figure out how to play this game and is looking for assistance.  He has an Uzi sub-machine gun in his bag and Shivas chided him for a penalty for illegal equipment and assistance.  Putin hits a few wedges, takes an hour to walk to the hole and records another 11.  Shivas exclaims, “Mon Dieu.”

The fourth hole is a short par 4 of 410 yards.  Trump is determined to right the ship but he doesn’t know how to calm his teammate Kim.  The big question is to how  to get Kim another 1 iron.  As the four of them retreat to their sheds for their evening meals, Trump repeatedly calls for playing more holes tomorrow with the four of them playing together.  Shivas states that it’s too soon to consider this process, “Ay, tis not ready for playee.”  Trump is really unhappy with his game and very annoyed with Shivas Irons…Trump retires for the night after an insipid peanut butter and jelly sandwich muttering, “How can I fire this guy Irons, reminds me of Nancy Pelosi.