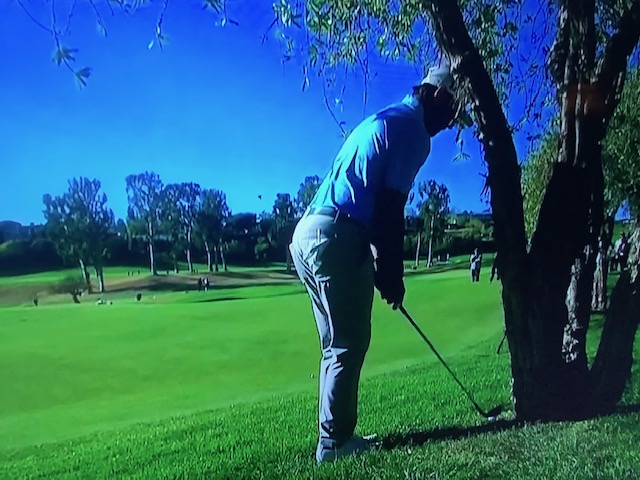 This was a tournament that seemingly no one really wanted to win but somebody had to.  Why not LA home town boy-Max Homa?  Max has been having a very good year thus far and has been high in leaderboards in many recent events on tour.  There seemed to be a “black cloud” following Max in some of these events as he hasn’t been able to break through.   Max is a very good player but there had seemed to be some thoughts of self confidence about being able to break through for what could be his 2nd PGA victory.  Riviera is not the golf course to have anything less than your self confidence and your A game.  The only birdie/eagle hole on the course is the first hole which is a 500 yard par 5 hole from an elevated tee.  Professionals and amateurs alike lick their chops in attacking this hole. There is little to no trouble on this hole and the player can just let out the shaft and drive it as far as you can for a second shot of only 170-180 yards to a large vertical green.  Eagle putts are numerous and therefore birdies must be made here.   For the professionals, you will lose a shot (maybe two) to the field if you make a par on this hole  Unlike other venues, such as Pebble Beach, where scoring on the opening holes is essential, you leave the first green and then get a serious slap in the face on the par 4, 2nd hole.  The second is a brutal par 4, 515 yards that requires two superb shots to get to a very difficult green. The fairway is pretty narrow for a long par 4 in that the landing area for the professional  has to be straight as there are trees on the left and a huge bunker on the right.  Any miss here will produce a very difficult shot to an elevated green with a steep hillside that can produce very bad bounces.  Keeping the ball below the pin is critical if you want to make par here.  The 2nd ranks very high on the most difficult holes on the PGA Tour.

Sam Burns, a non-winner on Tour, led the event after 54 holes at 9 under par.  His 74 on Saturday demonstrated how difficult it is to go low consistently at Riviera.  Burns also had Dustin Johnson breathing down his neck only 2 shots back and Burns probably felt that he would have to beat Johnson on Sunday.  The consensus was that Johnson would dominate the final round with his length and record yet another victory.  If we choose to, we get to listen to all of this dribble on the Golf Channel as the “experts” tell us what we already know.  The leader board was crowded down the line but it seemed that Riviera is too difficult for some players to come out of the pack.  Jordan Speith, once again, was in contention but would have to go very low to contend on this day.  Max Homa was there also only 2 shots back as the home town player was pining for a good finish here.

Burns got off to a very good start and had a steely look of confidence with great rhythm and tempo.  His focus was razor sharp.  He birdied the first hole and went on to shoot 31 on the front side and he seemed to be oblivious and not intimidated by his fellow competitor.  It was a bad omen for Johnson when he could only par the first hole as he fell further behind Burns.  Burns seemed to be cruising until he crushed his drive on the difficult 12th hole out of bounds, which led to his first bogey of the day.  From the rear, Tony Finau was on fire and Max Homa was playing well hitting fairways and greens consistently.  Homa was 3 shots back at the turn and Finau shot 31 on the front without gaining any ground on Burns.   The final nine turned into a three horse race between Burns, Finau and Homa.  Burns, who had led the tournament for 68 holes, finally lost the lead with a bogey on 15.  Burns remained focused and undaunted as he came back to birdie the 17th hole to reduce the deficit to one shot.  Homa continued to play bogey free golf and methodically made a nice string of pars until he also birdied the par 5, 17th.  Finau was matching the group overcoming a bad bogey on 15 with birdies on 16 and 17.  The stage was set as it would come down to the magnificent 18th hole.  The 18th is viewed as one of the best finishing holes on the PGA Tour.  The hole is a slight dogleg to the right with an uphill tee shot.  The fairway tilts toward the tree line on the right and the left is guarded by unfriendly kikuyu grass, which makes it difficult for the professional to control a shot.  Homa laced his drive right down the middle of the fairway carrying the hill and coming to rest at the 150 yard level.  The Sunday pin is difficult as any miss to the left side of the hole could end up in green side kikuyu.  Finau’s approach shot just missed the green ending up in green side kikuyu for a delicate chip shot which he executed well for his par.  Homa hit a perfect iron shot (probably a 9 iron) to 3 feet.  At this point, you think the tournament is over and that Homa needs to just make this three footer to seal the deal.  Hell, its a three footer, a gimme, a no-brainer—but then the mind starts playing tricks–he wants to win this tournament very badly, it would mean a lot to him personally, it was something that might be unattainable before the tournament started and now you’re here and on the cusp of fulfilling the dream.  I don’t know if all of this was in his head but I didn’t think this was a gimme putt as there are just too many subtle breaks in these greens.  Well, we all know that Max missed it and it seemed to me that he didn’t display the instinct that he was going to make it anyway.  What I did think was interesting was that his reaction seemed to be, “ok, I blew it, but no biggie–let’s go play some extra holes.”  Usually, the player that misses the short putt to win the tournament ends up losing the tournament badly in the playoff.  (Tom Watson lost the 2009 Open Championship in a playoff after missing a four footer on the last hole).  The first playoff hole seemed to seal the deal for Tony Finau.  Homa’s tee shot stopped right next to the stump or butt end of a huge tree.  (a left-hander would have no shot).  I didn’t think he had more a chip up the fairway, but Homa blasted an low iron shot that found the green.  It was then that I knew that the gods of golf had decided to put Homa through this trial and that he would come through as the ultimate winner–the hole was halved and on to the par 3, 14th.  Finau, who had birdied, the hole a few hours earlier dunked his shot into the right bunker probably at the whim of one of these golf gods. Finau’s bunker shot was pretty difficult as he didn’t hardly any green to work with.  His shot was decent and he had about 9 ft. for par.   Homa’s shot found the green and a poor putt for birdie resulted in a par that was good enough as Finau’s par putt rimmed the hole and fell away.    Homa wins the event in a strange fashion as some of things go as there wasn’t any drama at the end.  Homa’s “tree shot” sealed the deal.

Homa’s “tree” shot was pretty remarkable as you could easily lose it after missing the 3 footer on 18 for the win.  You begin to wonder–is it going to happen again?  Fortunately, Homa kept his composure and pulled off the recovery shot to keep the match going.  It wasn’t a sensational finish but Homa gets to realize a dream of winning this event in his home town and receiving the trophy from his idol-Tiger Woods. 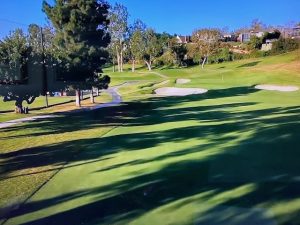 The 2nd hole at Riviera 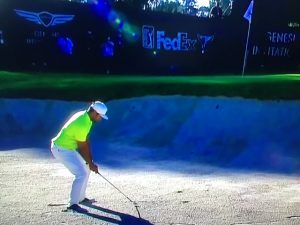