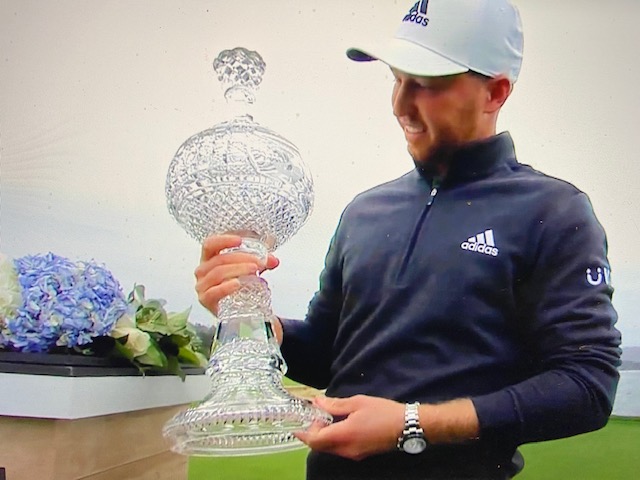 The 2021 Pebble Beach Pro-AM was supposed to be a pretty subdued event with the weakest field in years as players such as Dustin Johnson, Rory McElroy, Justin Thomas, Brooks Koepka and others were nowhere to be found.  Due to California and Monterrey Country’s current COVID-19 status, there would be no fans, spectators, celebrities or even AM’s.  The venue was reduced to play on only Spyglass (Thursday and Friday) and Pebble Beach as the Monterrey Peninsula Shore Course was eliminated from the circuit.  Some of the pros lamented about the continuing lack of spectators on the course following them around especially after a little taste last week at the Phoenix Open.  There would be no appearances by Clint Eastwood, Larry the Cable Guy or Bill Murray to stimulate the cheer that Bing Crosby still smiles about from above.  Murray did participate in a competition which raised $1.6 million for local charities with Steve Young doing the officiating?  Nate Lashley who has played well here in the past (in my pro-am group in 2018) waxed that play would be faster without the amateurs as the usual six hour rounds would be dramatically reduced.  He really wasn’t being smug or unkind, he was just being matter-of-fact and he would be correct.  Nevertheless, the tournament produced some tremendous excitement as only professional golfers can do.  Phil Mickelsen was quite entertaining especially for the high handicap weekend player.  Phil just couldn’t get it going consistently and the putts weren’t dropping and it soon became obvious in the middle of round 2 at Pebble that he wasn’t going to make the cut.  He seemed to be a bit distracted and disinterested coming in and the 18th was an absolute embarrassment as he knocked two consecutive shots into Stillwater Cove and three putted for a nine and made a quick exit.  Mickelsen is a crowd favorite here and has won this event many times including the 2018 event over Paul Casey in an abbreviated Monday morning playoff so his exit was disappointing.  With all of these negative vibes, the tournament emerged to be as exciting as ever.

Whatta-Berger!  Daniel Berger walked off the tournament.  Wait a minute! Walk-offs don’t happen in professional golf-walk offs happen in major league baseball in the bottom of the ninth inning or in extra innings etc.  How do you walk off a golf tournament?  Berger approached the 72nd hole of the tournament tied for the lead as he was knotted up with upstart native Northern Californian Maverick McNealy who actually as a teenager lived part-time with his family off Pebble’s 15th hole.  Berger had played well all day and started two shots behind 3rd round leader, Jordan Speith.  As Berger approached the 18th tee, he had to remember what had happened the day before at the end of the 3rd round.  Berger knocked his tee shot out of bounds on the right by no more than a foot in my estimation.  It was so close that he spent quite a bit of time trying to see if there was an angle where the ball could be deemed inbounds.  There were no out of bound stakes here as out of bounds were marked with white markers that look like highway lane markers.  After surveying the situation for a few minutes, Berger grabbed the ball and tossed over the hedges into the owner’s yard.  So here we are one day later and Berger rockets a tee shot down the left side over Stillwater Cove past the tree.  On this day, he was going to take the most aggressive line and not worry about the consequences as any miss would have found the cove.He has 250 yards to the green and smashes a 3 wood, which lands on the green some 30 feet away.  Two tremendous shots deserved an encore–very few players were going to knock it on this green in two but Berger accomplished it and then proceeded to hole the putt for an eagle 3.  A final round 65 of 7 under par would present victory for Berger at 18 under par for the tournament.  Berger’s performance was gritty–he never gave in to some bad bounces and breaks on some putts including the mishap on 18 on Saturday.  The ability to bounce back from these moments in golf illustrates the amazing skill and mental acuity of these players to compete at the highest level.

McNealy burst out of the pack making five birdies down the stretch to give him a legitimate chance at the title.  He also had an eagle attempt at 18 but his putt just missed leaving him with another birdie.  McNealy was a terrific player at Stanford University and has been grinding on tour for the last few years.  He certainly has the game to break through but Berger would not be denied.

It was yet another positive week for Jordan Speith.  The big difference in Speith’s performance this week is that he is starting to make longer putts which really vaulted him forward in his past successes.  Speith has been working very hard on his game and he’s making continuous improvement but the consistency required in the golf swing is still a bit elusive for him.  He made an incredible eagle on the 16th hole in round 3 with a draw (almost hook) that swings out far more than what I would expect.(photo below)  On the 16th, the 8 iron from 160 yards hung way out to the right and made a roller coaster turn to the hole and with a few bounces on line, it went right in.  On Sunday, his two shot lead evaporated quickly as he could not make birdies on the easy part of the golf course.  You have to gang up on Pebble on Holes 1-7 and make those birdies because there are no easy birdie holes after 7.  It was a grind coming in especially the 13th hole.  The 13th hole seems to be getting more difficult all the time.  The tee shot is deceivingly uphill and the prevailing wind seems to be against or cross requiring longer clubs to a green that makes a severe turn to the ocean with a string of unsettling undulations.  Speith’s game seems to be on the mend and his attitude is positive and infectious.  He finished tied for 3rd for another very respectable showing.  He didn’t lose the tournament–Daniel Berger walked it off! 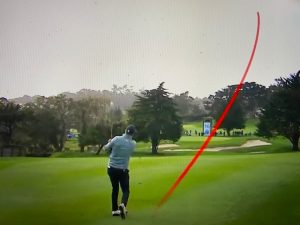 Pebble Beach has a way of bringing some players back to earth from a great round.  Patrick Cantlay had a 10 under 62 opening round at Pebble on Thursday only to come crashing back to a 73 on Friday at Spyglass Hill.  I believe you have to “survive” Spyglass and not lose contact with the field as the course is more difficult than Pebble.  Berger was able to navigate his way through Spyglass unscathed and this gave him the opportunity to get into position–the out of bounds on 18 almost spoiled his chances but his brilliant 18th on Sunday would stifle all comers.