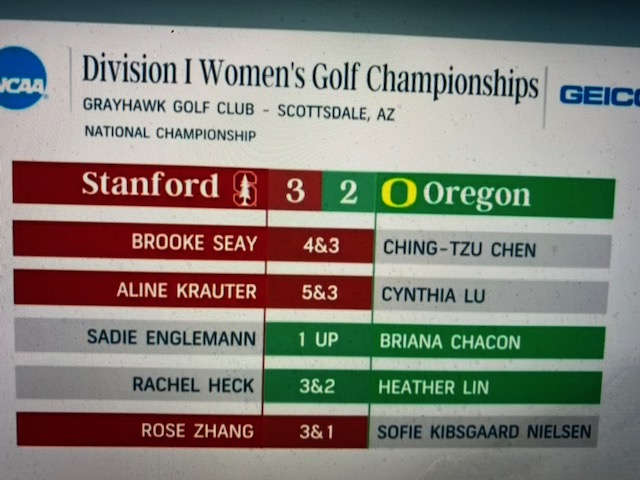 It was supposed to be easy and a fait accompli.  The Stanford Women’s Golf Team won their 2nd NCAA Women’s Championship at Greyhawk Country Club in Scottsdale, Arizona.  Stanford entered the tournament as the No. 1 ranked team in the country, and featured the top ranked golfer in the country, Rose Zhang and the No. 3 ranked player, Rachel Heck.  The tournament was far from a cakewalk for the Cardinal as a very game, upset-minded Oregon Duck squad took the Cardinal to the final match of the day.  Rose Zhang came through in the final match to win a hard fought match 3 and 2 and the Cardinal was able to claim the championship.  Oregon was down 2-0 in the finals and it looked like the Stanford juggernaut was in operation.  However, Oregon’s Heather Lin upset Rachel Heck and Briana Chacon defeated Sandie Engleman with a birdie putt on the 18th hole.  All of a sudden, the match was even with Zhang on the course.  Rose closed out the match on the 17th hole over Sonya Nielsen and Stanford’s dream would come true. 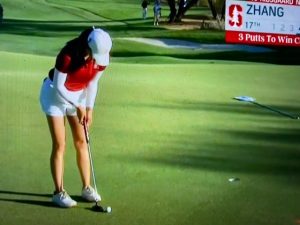 The Cardinal squad was heavily favored to win the title but despite the great players that they have, it still takes a lot of hard work to harness these skill sets into a team victory.  The architect for this task is Coach Anne Walker.  A collegiate golf coach is not teaching the players about their swings, grips or their potential future LPGA tour potential.  The coach’s responsibilities are enabling the players to compete as a team with an advisory role to be concerned with their entire collegiate experience.  The coach has to be able to develop outstanding team chemistry as the players all have a different wants and needs.  Coach Walker was a collegiate player at the University of California and a devout student of the game from her upbringing in her native Scotland where she would play 54 holes a day as a young girl.  While the responsibilities of the collegiate coach are generic to all programs, the situation at Stanford with these players is a bit more difficult because of the expectations for the program.  You are coaching so many good players that there is intense internal competition to decide who is actually going to play in the matches and tournaments throughout the season.

It’s one thing to be ranked No. 1 throughout the season and it’s quite a bit different to actually execute the deal in a tournament with all the best players in the country.  Golf is hard and any thing can happen in competition.  In the final match on the 17th hole, Nielsen (Oregon) actually ran over her ball accidently with her push cart where she had to incur a one shot penalty.  Fortunately, Rose Zhang didn’t need that penalty stroke to close out the match but other weird things have caused some pretty bad outcomes in match play.  The Stanford group realized that whatever their ranking, the pressure was actually greater to having to achieve the championship and Coach Walker and her squad persevered to a great achievement for their program.