Thomas Perseveres Through to the PGA Title 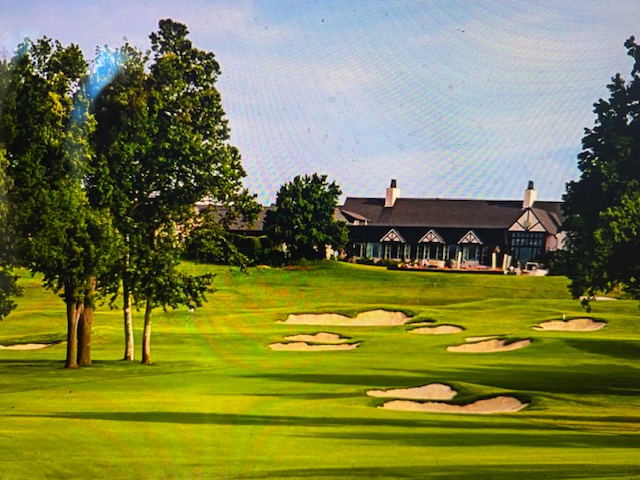 Justin Thomas came from 7 shots back in the final round to get into a playoff with Will Zalatoris to win the PGA Championship at Southern Hills.    Thomas played flawlessly in the playoff and hit that one shot to take the lead in the 3 hole playoff.  Thomas drove the par 4, 17th hole -302 yards to about 20 feet and two putted for a birdie that would be the difference.  It immediately brought to mind a similar shot hit by Colin Morakawa at Harding Park in San Francisco to win the 2020 PGA Championship.  The PGA Championship in 2022 at Southern Hills was a lot different than the previous PGA championships held there.  While a number of changes to the course were made, the big difference was the weather.  In May 2022, it was relatively cool (high fifties), windy with huge differences between the morning and afternoon rounds in the first two days of play.  Playing the PGA Championship in August at Southern Hills is playing in intense heat and humidity where the ball travels further and you need a number of extra shirts and gloves to get through the grueling heat.  The May event eliminates this problem but certainly changes the nature of competition.  There are a number of stories here to cover and we’ll move through Justin Thomas, Will Zalatoris, Mita Pereira and Tiger Woods. 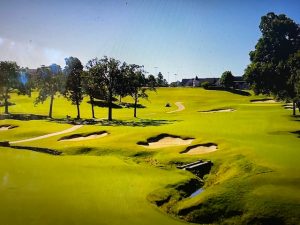 Thomas was one of the favorites to win going into the tournament and was selected by veteran ESPN commentator, Andy North to win.  Thomas has the game and experience to compete in the majors and it would take this skill set to compete against the best players in the world.  Many of the best players in the game didn’t have their best stuff as Dustin Johnson, Patrick Cantlay and new World No. 1-Scottie Scheffler missed the cut.  Thomas was 7 shots back of unheralded Mito Pereira going into the final round.  Thomas marched to the sixth tee at even par probably thinking that he just needed to play the course hole by hole and see if any ground could be made up.  On the 228 yard, par 3, Thomas hit a dead cold shank 100 yards ,with a five iron,  which has to be a devastating blow as you pursue a major championship.  I would be a wreck if I did this in a $5 nassau game.  Thomas then hit his next shot 10 yards clanging a tree on the way.  Now laying 2, 100 yards away, Thomas nailed a wedge to 18 feet and made the putt–an incredible bogey.  The gods of golf were smiling, he would not make another bogey for the rest of the tournament and went on to record 5 birdies (including the playoff) and a number of great putts for pars while the rest of the field were mostly going into reverse.  The success after the dreaded “shank” (golf’s worst curse word) was a major turning point in Thomas’ determination and concentration and illustrates the skill and incredible concentration of a professional player. 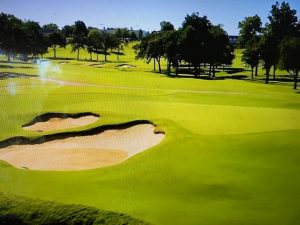 Mito Pereria was an unknown Chilean player prior to this event.  The most successful Chilean player is Joaquin Niemann, who has been a major competitive player on the PGA Tour.  Niemann would turn in a respectable performance here,  tied for 23rd at 2 over for the tournament.  Pereria was in control prior to the start of the final round-the putts were dropping and his ball striking was very impressive with 3 sub par rounds and a 3 shot lead over Will Zalatoris.  The reversal of fortunes began with a bogey on number 3 and another on 7 as his lead began to shrink.  Pereria persevered and watched his lead shrink gradually as Thomas, Zalotoris continued to apply the pressure.  Despite all of this, Pereria still made it to the 72nd hole with a one shot lead and then the gods of golf decided that the Chilean would become another victim of golf’s cruelty as he aggressively watched his tee shot veer too far to the right, missing the landing area.  Why not put your drive in the fairway with a three wood and take the creek out of play completely?  That question will undoubtedly haunt Pereria for a while but he had to figure that he wanted to play the hole as he had successful the previous three rounds.  The 18th hole at Southern Hills has been claiming victims all week and now Pereria would suffer the same fate as Phil Mickelsen at Winged Foot at the US Open in 2006.  Pereria’s bogey putt on 18 would not drop and he not only lost the lead held for 71 holes but also missed qualifying for the playoff and would slink away from being the first Chilean champion to a 3rd place finish with a five over par 75.  Pereria was classy in defeat–he didn’t choke on that tee shot–it was a simple miss for a strategy that he had successfully employed all week–it happens–you just don’t want to happen on the 72nd hole of a major championship.  The gods of golf owe him one…we’ll see if this sparks his PGA tour career.

Zalatoris was a factor throughout the event.  He is a confident young man who is performing extremely well in these major events particularly his recent finish at the Masters.  He also had a unique experience at the 6th hole on Sunday with a completely different problem.  He hit his 5 iron, 235 yards over the green landing on a cart path and setting up an almost impossible chip and was able to make a “good” bogey.  His putter seems to fail him on a number of holes but he made one on 18 to get him into the playoff.  Zalatoris didn’t lose the playoff–Thomas won it with the tee shot on 17 to get the one shot lead.  Zalatoris is going to win a major and this experience will add to an already list of impressive accomplishments.  One of these tournaments, the putts that rimmed the hole are going to go in.

Much has already been written about Tiger’s performance in this event.  He seemed to be in a lot of pain throughout this event and yet played at a high level.  After his double bogey in the second round on the 11th hole, he played the final seven holes in 2 under for an impressive 69 to make the cut.  Tiger is an incredible champion who is battling the odds of trying to overcome serious injury but physical limitations seem to be taking a great toll on his body but certainly not his spirit.  It’s difficult to say what the future holds for Tiger for participation in majors going forward but we all know that he will be doing everything possible to contend in these events.

Southern Hills reputation as a major championship venue was reinforced with this event.  The course presented a pretty stern test with cool weather, wind and a tough set up and only yielded nine players under par for the championship.  The par 4, 491 yard hole played a key role in the resolution of the tournament and continues to be one of the most difficult holes for a major championship venue.  The bunkers also presented some interesting issues.  We are used to seeing PGA professionals hit green-side bunker shots that result in tap ins or very short putts of 3 ft. or less.  In this event, bunker shots were flying everywhere and the up and down percentage went down precipitously as it seemed that the texture of the sand was more gravel like and disabled the opportunity to get enough spin and control on the ball on the greens.