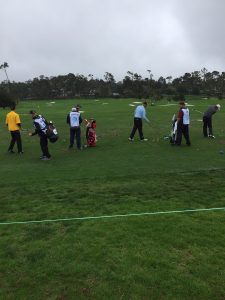 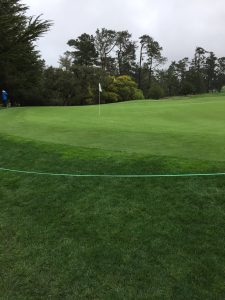 Stewart Cink’s approach shot to No. 1 at MPCC 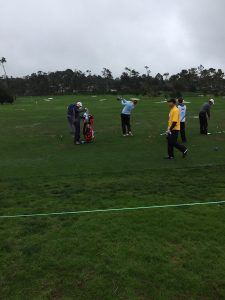 Friday morning at 8:30, the players that hadn’t completed the first round went to finish in the sopping conditions of the golf courses.  The courses were very wet from further overnight rain but none was forecasted for today-so everyone played, “lift, clean and place” rules.  The second round official started at 10AM and we went over to MPCC to pick up our tickets and walk the course.  Crowds were sparse in the damp, cold (by California standard) conditions but the day would improve.  On a day like today, the ball won’t run at all in the fairway making the courses play longer but the professionals can take dead aim at the pins knowing that the ball will stick to the putting surface.  We spent only about 3 hours at MPCC following Stewart Cink (winner of the 2009 British Open over Tom Watson) and his group for the first five holes.  We then headed for Spyglass Hill where most of the “big” names play on Friday.  Went back to the house on the 13th hole and watched many groups come through including Phil Mikelsen, Brandon deChambeau, Justin Rose, Jordan Speith and celebrities as well.  Bill Murray drove his tee shot at the edge of my property line and proceeded to hit a pretty good shot just short of the green.  His was wearing a Cubs over jacket and “loudmouth’ pants.  Our neighbors, the Popes, greeted him and Vicki went in the house and brought him a glass of water.  Chambeau’s drive on 13th was the longest I had seen of almost 300 yards which was all carry (no roll) into the left rough.  He couldn’t capitalize on the shot as he airmailed the green with his approach shot of 140 yards so he had to get up and down for his par which he was able to do.

Our Cordevalle professional, Ray Otis, was also at Spyglass today and he had a better day than day 1 and was +1 through 9 holes at Spyglass.  Fog rolled in the late afternoon causing play to stop and leaving a bunch of players to complete their round on Saturday.  Weekend weather is forecasted to be sunny and warm which will a godsend to these guys who have sloshed around the last few days.