Thursday was the beginning of the iconic AT&T Pro-AM, the best such event on the PGA where amateurs are guaranteed to play at least 3 rounds with the partnered professional with a Saturday night cut line that will enable 20 of them to play on Sunday in front of a large TV audience.

Today the big headline was the weather.  Northern California has been pounded in the last six weeks with large douses of rain, wind and general mayhem causing flooding, road closures and all types of havoc.  Of course, the water police continue to impose drought restrictions on the populace with the continuation of astronomical water bills.  The tournament has been blessed for a reasonably long period of time with outstanding weather with brilliant sunshine and warm temperatures to the envy of the East Coast audience braving snow and ice in the middle of winter.  Well today, the weather turned pretty nasty as another storm pelted Northern California in the afternoon.  The tournament is played on three courses-Pebble Beach Golf Links, Spyglass Hill and Monterrey Peninsula Country Club’s Shore Course.  Today, Pebble Beach was the toughest as the elements of wind and rain pummeled the players especially on the stretch of 8, 9 and 10.  Matt Kuchar played those holes in 4 over par.  The 17th hole had a severe left to right wind which seemed to confuse everyone.  Today’s pin placement was the easiest in the front of the ground and was only 160 yards; however, with the wind of at least 2 clubs-the hole was actually playing 200 yards and amateurs and professionals alike were missing the green.

Our resident professional at Cordevalle, Ray Otis,  shot 79 today (+7) at Spyglass Hill which is usually the most difficult of the 3 courses.  He is playing with his amateur partner, Larry the Cable Guy, (not sure if that’s his full name) so we look for Ray to climb back up the leader board tomorrow.

The photos here were taken from my back porch at Spyglass.  It was raining too hard to venture out further but the bunkers are beginning to take on water.  Tomorrow should be better as this front moves through and we should have a pretty decent weekend. 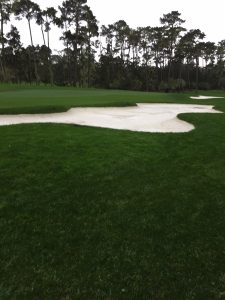 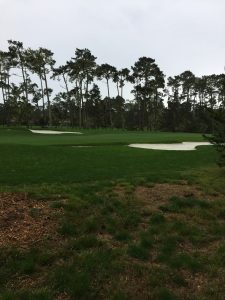 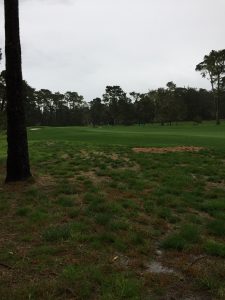 170 yards from the green from the left rough