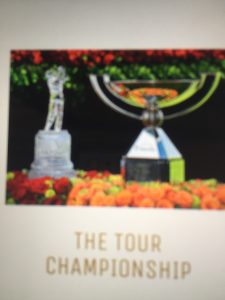 The Tour Championship at East Lake in Atlanta marked the final event of the PGA Tour for 2017.  It’s the culmination of a series of tournaments where the field is pared to the top 30 players to compete for the Championship and a shot at the Fed Ex Cup which is a $10M prize.  Imagine golfers playing for $10M.  I believe that the PGA Tour has undergone a complete metamorphosis from the Tiger Woods era.  The tour is now dominated by a bunch of 20 somethings (between 22-27) who basically drive the ball 300 yards, can escape from virtually any problem that a wayward shot produces, and have the short games of chipping and putting that I have never seen by so many players at one time in the sport.

The Fed Ex Cup is the ultimate champion for the year on the PGA Tour.  Although you can find the qualifying rules and point system on the web, it is impossible for the golf fan to understand the point system.  It is unlke any major sport where the spectator always knows the score.  In the Fed Ex Cup system, the player doesn’t even know the score since his standing is effected by the play of others.  It made for some exciting drama on Sunday as the lead went back and forth between Justin Thomas and Jordan Speith for the Cup.  Speith had entered the final event as the No. 1 seed for the Cup with Thomas being No. 2.  Players in Speith’s position in past years did not fare well and most of them ended up second for the Cup championship.  The No. 2 seed has had much better luck finishing on top a number of times and this year was no exception.  The field played very well and the leaderboard for the Tour Championship bounced around all day and Xavier Schauffele came out on top with a final round 68 besting Thomas by one shot.  Schauffeele demonstrated a ton of grit as he played his way through to this victory under a lot of pressure coming from behind, taking the lead and holding onto it.  Paul Casey, the 3rd round leader, still couldn’t shake the Sunday blues shooting 3 over 73 for fifth place in the event.

The Fed Ex competition provided additional drama during the event.  At one point, Speith and Thomas were deadlocked.  If it had finished deadlocked, they would participate in what would be a $10M playoff!  It didn’t happen as this time, Speith’s 15 foot putt for birdie on the 18th hole missed the cup by a few inches depriving him of the birdie he needed to claim the cup.  Speith struggled with the putter as his iron play was spectacular and gave him ample opportunities for birdies which he did not convert.  The day belonged to Justin Thomas.  He crushed drives over 320 yards routlinely and put himself in position to make birdies.  He actually missed a few tee shots that went right into the trees on a few of the holes but then he would escape with an extraordinary blow that found the green such that he could make par.

The quality of play at these last four events has been truly amazing to me.   It was also covered well as usual by NBC with Dan Hicks and Johnny Miller and crew providing some excellent commentary on the proceedings.  It’s good to have the DVR working since this event has to compete with viewers of the NFL and the Lions/Falcons game was quite a good one competing with the golf event.  With the DVR, you get to watch both and if you’re clever without knowing the outcomes either.

The President’s Cup will be played this week in New Jersey and I don’t think the International Players have a chance.  The millenials are just too strong and too focussed.  In addition, they care about each other as friends and competitors.  I think it will be a major turrning point for the US in the next Ryder Cup competition.  The PGA has completed the transition from the Tiger Woods era and now has a bevy of stars to showcase and become great ambassadors of a great sport.  It feels like we’re back to the days of Arnold, Jack and Gary Player.