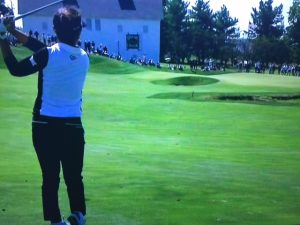 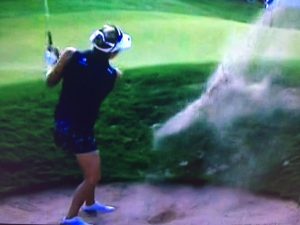 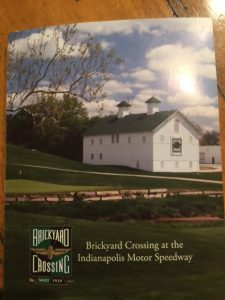 Brickyard Crossing is a Pete Dye redesigned public golf course that is actually inside the Indianapolis Speedway.  We have a lot of familiarity with this venue since it is a regular stop for our group when the Final Four NCAA championships are held in Indianapolis.  Golf is always a part of the Final Four weekend with a private course scheduled on Sunday and Brickyard Crossing on the Monday when the Final Four champion is decided later in the evening.  It’s actually pretty weird playing golf on a par 72 championship layout to the raucous noise of Indy cars doing practice laps around the famous oval.   It’s hard to believe you are actually playing golf in the middle of the famous car racing track in the world.

The LPGA stop was the inaugural event for the tour focusing on Women in Technology and advancing the cause of women’s participation in the STEM education movement throughout the country and encouraging women’s participation which is a terrific idea.  The 54 hole event came down to three players in the final group with Lexi Thompson, Lydia Ko and Candie Kung.  Thompson and Ko were tied for the lead with Kung (from Taiwan) one shot back.  Thompson cruised to a 4 shot victory with six birdies in the final round.  Her length off the tee was a significant advantage over Ko and she outdrove her by an average of almost 60 yards.  Nevertheless, it was close until the 11th when Ko’s perfect drive in the middle of the fairway found a divot hole.  Her 124 yard pitch shot sailed over the green and she ended up with a double bogey 6 on the short par 4.  Thompson’s driving was relentless as she recorded 3 birdies on the way in for a convincing victory.  Ko could not make any putts to match Lexi and finished second.  Ko was the world No. 1 player in 2015 and perhaps success came too early for her.  This showing was her best finish in 2017.  Ko is still very young and has the time and ability to return to form.  She seems to be struggling with the notion that she has to drive it further and swing changes and equipment changes can take a long time, if ever, to get back to her position.  I remember when Curtis Strange won 2 US Opens and came second in a third Open.  He decided he had to get longer to match or keep up with the rest of the touring professionals.  His game was never the same and he never contended for another major championship.  Ko’s short game is her strong suit and it seems to me that her putting prowess will return.  She will have to decide to play within this skill set or else risk her entire game.  She will never drive it as far as Lexi Thompson or a number of the South Koreans on the tour.

Brickyard Crossing is a fun course with a few funky holes.  It’s memorable for me as I holed a six iron from 160 yards out for an eagle 2 on the par 4, 5th hole of 373 yards.  I never did see the ball go in but there was a maintenance worker on a tractor beside the green-side bunker on the right and he let out a “whoop” when he saw it go in.  I was playing with rental clubs and didn’t even have a six iron.  It so happened that my playing partner was playing with Top Flite Tour irons which were the clubs that I had left at home.  I borrowed his 6 iron for the shot and it went in.  I would have never been able to do that in a competitive event but an eagle 2 is an eagle 2 in my book.  Pete Dye redesigned the course a number of years ago and the course has his trademarks all over it with railroad ties and well placed rough and water.

This will be a fun event in the future for the LPGA and the attention to Women in Technology is a great focus item.