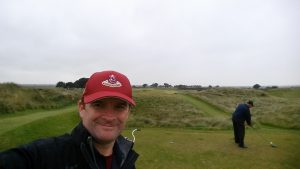 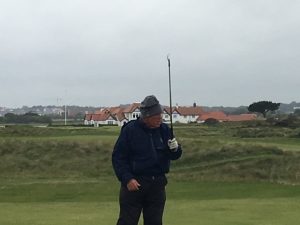 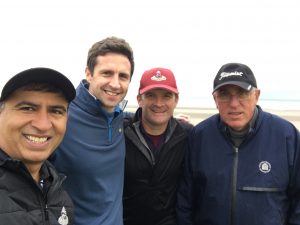 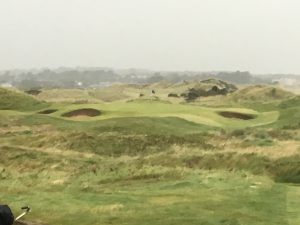 I’ve been coming to Ireland for a long time for business and mostly for golf over the years. My first trip was in May, 1982 where we played in the South–Ballybunion, La Hinch, Waterville and New Ballybunion.  Sadly on that trip, we didn’t see much of any of these courses as we were pelted with wind, rain and fog.  After that first trip, almost every trip thereafter has been brilliant with sunshine and little to no rain whatsoever.  Well, we tested our luck and came up short this time.  Three rounds were played and the weather played havoc with us for all three days in varying degrees.

Old Head:  The club and the course are spectacular.  My playing partner kept wishing that the weather would be good and that Old Head had its own microclimate so not to worry.  His entreaties were not answered as the wind was howling at over 50 miles per hour.  The course had been closed the day before due to rain and high winds.  I believe the club told us that the course had only been closed one time before this so we were in for a real weather challenge.  The club made us feel very welcome and the guest suites are very well appointed and comfortable.  What I especially liked is that my room faced the sea with the lighthouse in full view outside my door.  The wind was howling and tonight I would sleep peacefully with the sliding glass door half open and the breeze completely filling the room as I dove under the covers.  We played the front nine without a drop but the wind was blowing over 40 miles per hour so it was only a matter of time before the heavens would begin to wail.  We got to the treacherous, par 4, 12th hole and bam….here comes the deluge—the grips were gone in less than a minute.  Raingear and raingloves on immediately as visibility was severely reduced.  It was hard from there on in and a tremendous “grind.”  You have to trust your swing and really focus to avoid caving in to the elements.  It seemed like it took forever to play through 16 but we survived it.  Despite the weather, it was wonderful to play there and a good excuse for another return.

Royal Dublin:  I had played Royal Dublin many years ago and hadn’t remembered much about it as we played it in the middle of summer.  Unfortunately, we had no practice time and ran up to the first tee with a set of rental clubs in toe.  Our sponsoring guest told us that we would be playing down wind for the front nine and into the wind for the back nine.  The course was a lush green carpet of fairway and the greens were in perfect condition.  I proceeded to rush through my opening tee shot and almost lost it in the heather on the right–I was very disappointed especially downwind.  I managed to recover from there and persevere but it seemed that every shot was getting some kind of bad bounce in this following wind.  The downwind conditions were idyllic but I wasn’t taking advantage of them.  We had spells of intermittent rain and high wind throughout the front nine.  We reached the 456 yd., par 4 with a drive and a 6 iron–not possible for me in normal conditions.  My game would start to come together as we headed into the wind.  All of a sudden, drives were straight and long and pars started to be registered in rapid fashion.  The highlight of the round for me was the par 5, 18th hole which I had completely forgotten about.  I thought that this was an easy hole as you drive the ball to the first burn and then knock it on the green because I originally thought it was a par 4.  The second shot is actually a 215 yard carry over the second burn onto a monstrous green.  Between that second shot in the fairway and the green is a tangled mess of high rough and general mayhem.  I hit a 3 wood off the tee to avoid the first burn and landed it 10 yards from the burn.  I didn’t realize or didn’t even consider what was in front of me between my position and the green except the second burn.  I nonchalantly knocked another 3 wood over the second burn onto the green some 80 ft. from the hole.  As I walked up to the green, I was amazed at what I had accomplished-that was not the way to the play the hole and anything short of the second burn would have been very high penalizing rough.  Of course, I three putted for a par.  Christy O’Connor, Jr., the famous Irish professional, would play this hole with a 4 iron down the left side of the fairway and then hit another 4 iron to clear the second burn or be within chipping distance of the green.  I was lucky inasmuch as I played the hole incorrectly and would have a big number if my ball had landed in the rough in front of the burn.  Sometimes, you get lucky in this game.

Royal Port Marnock  I’ve played Port Marnock every year for the past five years and it is a course that you would love to play every day.  It seemed that times were becoming prosperous for Port Marnock as I noted some capital improvements around the course and the infrastructure of the club.  The wind would howl again today but not as bad as Old Head or Royal Dublin.  It was as if the Irish gods were smiling a bit stating that “you’ve endured enough, so we’lll just give you a taste of the wind and the rain.  The worst of it came down on holes 13-15 where the rain pelted down but not bad enough to kill the grips on the clubs.  I had the audacity to leave my rain gloves at the hotel as an omen of good weather and I was almost incorrect in that assessment but not quite.  Unlike Royal Dublin, the winds at Port Marnock can come from all sides so you had to be careful with aim and direction making club selection difficult at times.  The course is always challenging but this time, I was hitting every fairway with the driver and scoring pretty well so it was quite enjoyable.  The scenic par 3 15th on the ocean played its yardage of 164 yards but my tee shot just fell off the green to the right as the pin was on a crown with the wind blowing shots towards the ocean.  Our group played well the entire day as it got pretty dark on the 17th hole on this gray dull day.  The 18th hole is a terrific par 4 with an elevated green and we all hit good shots to this green with good opportunities for par.  It was another terrific day at Port Marnock with a bit more weather challenge as October weather is rather unpredictable.  Of course, the next day was sunny and mile and I’m sure Dublin’s Chamber of Commerce was out taking pictures of the brilliant day.