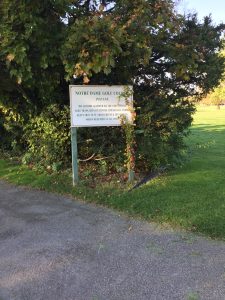 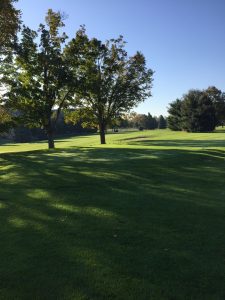 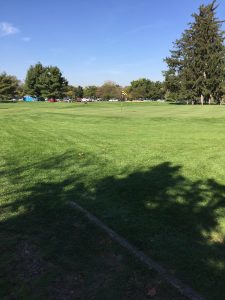 Okay, what is this post all about?  We were at Notre Dame University for the weekend to attend the ND/USC rivalry football game.  Notre Dame has a championship golf course that will actually be the host of a future US Senior Open.  Oops!-no tee times available on the Championship Course on Friday so we’re not playing there. Of course, I’m sure the droning overhead of private jets into the South Bend Airport may have something to do with tee time availability.    I’m sure those passengers on those jets grabbed the tee times for this very important weekend.    Instead, we are playing the iconic Burke Course which plays second fiddle to the championship course.  Burke is a very special place on campus for a number of reasons.  It’s only a nine hole course that may be losing its priority to the institution by the day so you play the course twice to get in the required 18 holes.  In fact, one could argue that the golf course is an ancillary locale since it is the home of ND’s women’s cross country team who have priority and right of way on the course while you’re playing.  Coach is monitoring the progress of the squad in a golf cart following the girls throughout the course.  There is no bag drop at Burke-you merely drive in and lug your clubs to the starter’s “shed.”  The shed is an impressive facility with friendly personnel collecting your green fee and controlling the tight inventory of golf supplies that might be required by the customer.  There is also an impressive fleet of ND logo’ed gas powered golf carts to transport your way around this venue.  I needed to rent golf clubs so I eagerly anticipated what might appear from the catacombs of the “shed.”  I wasn’t disappointed.  The irons were classic–Titleist irons circa. 1985-I can hit just about any iron so no concerns here.  I almost wept when I saw the woods–there was a metal driver that had a few dents in the head and a 3 wood with a bad case of the measles.  Driving range?  No way–proceed to the 1st tee.  I was stoked-it doesn’t get any better than this-good friends, a flat easy looking golf course and clubs that would be extremely challenging to play with.  Burke, on this day, was idyllic with its bucolic features of cropped fairway grass, very little rough, a bunch of fall leaves on the ground reflecting different colors under a beautiful October blue sky in Indiana.  Bunkers could double as play areas for children building castles in the clay.   It was a mellow feeling as I approached the first tee–there was no way that the driver in this rental bag was going to be employed today.  I proceeded to stripe the first tee shot nearly 200 yards with the ancient 4 iron leaving me with another 165 yards to the green.  The course is incredibly flat and lusciously green.  It is virtually impossible to lose a golf ball here unless you happen to sky one into the trees and it doesn’t come down.  Burke has the distance of a complete course with par 35 for the nine at about 3100 yards (my estimate).  I kept hitting irons off the tee for the first few holes gaining confidence and some tempo with these antique clubs.  Finally I hit the 3 wood on the first par 5 and it worked so that club became part of the repertoire that I would employ for the rest of the round.  I didn’t have the courage to hit the dented driver so I dipped into my companion’s bag and pulled out a Taylor Made 580 which also worked.  He was having trouble hitting this club, but two of us in the group started hitting it and warmed it up so that later in the round, the owner of this club was actually able to hit it as well.  The putter was a Taylor Made version probably made in the 1990’s but it worked as well as Burke’s greens were true without a lot of trickery.  The ninth hole was the best as the green was the most difficult with a significant slope and a difficult pin position.  All of our birdie putts went flying past the hole despite just a tap of the blade as our approach caught the upper part of the slope.  It was an exhilarating experience playing with good friends, behind a foursome of students.  The relics that had served as our golf clubs were returned to the “shed” as our companions trudged off to return their own clubs to the car.  When they returned to retrieve us–we turned to a telling sign that said “COURSE CLOSED”.  Burke would now revert to become a parking facility for the patrons of the big game on Saturday and preparations were required for that purpose. The Burke Golf Course-A special facility-Women’s Cross Country, Golf and Parking –another hidden gem of Notre Dame University.