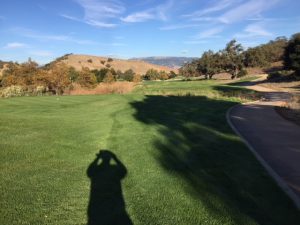 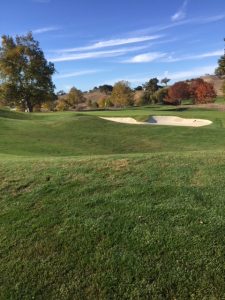 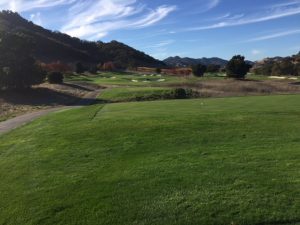 The 14th of November, 2017 was a glorious day especially being at a golf course-any golf course and today we were at Cordevalle GC in San Martin, California.  Mother Nature unfolded a picture-perfect day with nary a cloud in the sky.  Rains in the days preceding the 14th seemed to clear out any bad air and provided a level of moisture and appetizer for the course.  Temperatures were in the low 60’s requiring a decision to bring a light jacket or leave it in the bag or do both.  The greens were being aerated to take advantage of the perfect conditions where the time to heal and develop would accelerate.  The place was a quiet as a church without the congregation.  The driving range  was closed.  Even driving ranges need a breather and regeneration to provide the player with the confidence of an impending warm up or practice session.  The range chores were many: wash the balls, mow and tend to the gouges in the teeing areas, mow the landing areas, weeding and restock the inventory of towels, tees, scrub brushes and the like.  All of these activities were occurring simultaneously without sound.  Occasionally, the whirr of the lawnmower shaving rough or fairway played like an organist practicing in the cathedral.

Without a driving range, we headed out to the fourth hole with 3 practice balls in tow.  At 111 yards to the hole, we warmed up with 3 pitching wedges all of which found the green.  The green was pock marked with tiny holes and a glaze of sand.  Putting didn’t really matter but we are trying to align the putter and stroke the ball with an in to out stroke.  I’ve been fighting the tendency to putt outside to in which will produce too much variability to make any putt.  We moved on to the 5th hole for the first tee shot of the day.  The weakest and most inconsistent part of my game for over 40 years and I’m still determined to conquer it.  The lesson focuses on turning the body as far as possible from the inside to out to unleash power and enhance swing speed.  Three drives land in the fairway about 215 yards out against the wind.  The hole is a 440 yard, par 4 so we go to the 3 wood–another change as I usually have the ball up in my stance.  The instruction is now to have the ball back in the stance with the big turn from in to out.  Boom!–a better drive would have found the green–we’re within 40 yards of the green and a couple of good approach shots made for an easy par which is usually a bogey hole.  (No. 5 is the No. 1 handicap hole on the course).  Iron shots-same drill–ball back in the stance-in to out turn and more great results.  If you don’t turn in this position–you could end up with the dreaded s…..k (I dare not write it but I’ll have to for my non golfing readers (shank).  The tee shot on the 9th hole carried the ditch nicely to the 160 yard mark–with the pin in the front–the best play is to stay below the hole so I selected a six iron.  Alignment with these new swing techniques is critical to execution–my first attempt landed in the green-side bunker as the strike was perfect but alignment was off.  Second attempt landed about 10 yards short of the green below the hole in a position where an easy chip shot resulted in par.  The lesson provided a number of insights which will have to be practiced with pounding a lot of goals to produce success on the golf course.  After 40+ years of playing golf, it’s nice to start hitting the ball properly.

I couldn’t resist.  The day couldn’t end this way–the weather, the quiet, the solitude were too enticing to quit.  I went off to the 11th hole and proceeded to duck hook the first tee shot–great muscle memory–lasted one hole.  Despite the bad shot, nothing could be wrong today–I took another 3 wood and blasted it short of the green side bunker guarding the pin.  The chip shot was tricky and requiring significant elevation which was executed for a two putt bogey.  Onto the 12th, the 200 yard par 3 really looked inviting as I pulled the 3 wood.  Another poor executed shoulder turn from inside results in a miss to the right, an indifferent chip shot results in another bogey.  I’m still happy despite losing all “lesson momentum.”  We’re going to call it a day by playing the venerable, par 5, 18th hole.  Another indifferent tee shot but good position-but wait–there are 3 women in the middle of the fairway–I didn’t see another human being on the course all day and here we are–3 women (seemingly hotel guests) in the middle of the fairway.  After waiting to hit my second shot for five minutes-I take out a 7 wood and crush it over 200 yards and now I’m about five yards behind the 3 dawdling ladies who are probably finishing a 6 hour round.  I picked up my ball to avoid having to take nap waiting for them to finish.  Back to the 4th hole to get in a good tee shot–mission accomplished–is this enough–of course not-first ball is a 3 wood from 195 yards out which lands on the green some 60 feet away.  Second ball is a 4 iron from 180 yards that trundles up to the front of the green as well.  Satisfied?? –of course not–the putt is 60 ft. from the hole so what the hell–let’s try the gap wedge on the green–Phil Mikelsen does it on occasion.  Of course, I hole the shot from 60 ft. through the holes and sandy glaze over the ridge and down to the hole–plop–it’s in and yes we’re finally done.  The opportunity to practice like this on a championship golf course is probably a once in a lifetime event.  Sweet!!