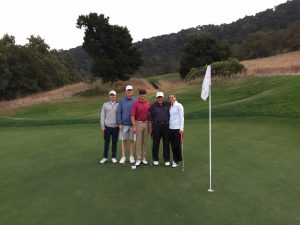 The annual Steve Young/Jerry Rice Golf Classic was held again at Cordevalle G.C. on October 16.  This is a charity event that benefits the Forever Young Foundation and the Tech Museum in San Jose.  I’ve been playing and supporting this event for the past nine years and the work done by these two organizations creates significant benefits for children and the various programs that the Tech Museum provides for the Silicon Valley community.  PGA Legend and NBC golf commentator, Johnny Miller is gracious with his time to support the event with a clinic and usually brings his two sons who are excellent players in their own right.  The event is unique in that it is a family affair with a cadre of players and supporters who show up every year to support the event to raise significant funds for these activities.  Steve and Jerry do a great job hosting the event and bring a unique personal touch to making everyone feel welcome for what is always an enjoyable day.  Participants are showered with tee prizes and it usually takes me an hour to unload my car.  I have received enough luggage from this event to provide for the entire family and all the kids as well.  In addition, there are side competitions on many of the holes to potentially win cars, motorcycles, airplane trips as well new food offerings such as “cookie dough” energy drinks and all kinds of stuff.  The golf cart at the end of the round resembles a pile of merchandise that looks like a scene out of “The Price is Right.”

The golf is played as a “shamble” where the best tee shot is chosen from the team and then each player plays their own ball from there on.  One best net ball for the team becomes the score for the hole.  The competition is keen primarily for bragging rights more than winning.  The secret sauce for this event is that there is a table of prizes in the rear of the dining room full of various types of merchandise, sports memorabilia, clothes, books etc.  The winners are announced during the dinner but everyone is a winner–the winning team merely gets the opportunity to get up and claim a prize from the table first, the runner-up team picks second and so on until every team has claimed a prize.  The charities are the winners and that’s the way it should be.

Our team played very well (no bogies, 3 eagles, too many pars)  but could muster only 14 under par which was toward the rear of the pack.  We scratched our heads as the winning team was 22 under par.  Teams consist of 5 players with either a professional or a low handicap amateur who will belt drives of 300 yards or more.  Our perennial captain is Brandi Chastain who plays very well and generates considerable energy and excitement for the team.  It’s always a pleasure to play with Brandi.  The scoring system is the best net score of the group playing with our handicaps shaved by 50% to determine the best net best ball.    One of our players was assigned a zero handicap so we were excited that we had a real “ringer” in our midst.  There were chants of “Zero, Zero!” as he crushed a bunch of drives down the middle of the fairway.  We were then told that he was a “9” handicap and therefore should have had 4 strokes.  He was a “rookie” in this tournament and his handicap was probably never received. We don’t know if this would have changed our outcome but no matter–we had a great time and whining is simply not acceptable.  I believe the tournament achieved a record for contributions thanks to the generosity of the participants and the benefits derived for the Forever Young Foundation and the Tech Museum are immeasurable.

We’ll be back next year and check those handicaps!  Congrats to Steve, Jerry and Forever Young Executive Director, Sterling Tanner and his staff for another outstanding event.