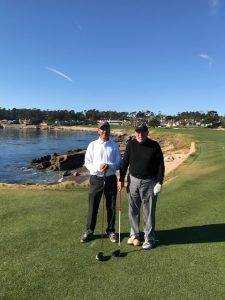 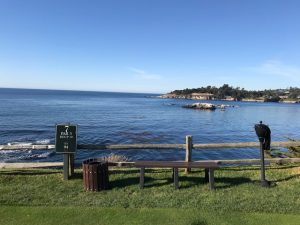 We played in the Pebble Beach Homeowner’s Tournament yesterday at the venerable Pebble Beach Golf Links.  It was my tenth consecutive year of playing in this event.  The tournament is sponsored by the Pebble Beach Company and it is for homeowners within the 17 Mile Drive (owned by the Pebble Beach Company) and their guests.  The tournament is well organized and is a fun event with your neighbors and their friends during the holiday season.  What I especially like about the event is the format.  It is a simple two best ball event of the foursome where all players simply play the game.  Unlike most events of this type, the handicap sandbaggers usually don’t come out on top as the course is set up a bit too difficult for that to occur.  The opportunity to play Pebble and have the course to yourself in a tournament setting is the biggest draw to play in the event.  After play is concluded, a wonderful buffet lunch is served at the Lodge and the food is always wonderful.  Awards are handed out quickly and efficiently unlike many events of this type.

The weather yesterday was incredible with temperatures in the mid-60’s with brilliant sunshine and nary a cloud in the sky.  The weather in past years on these tournament dates was far from yesterday-usually with wind and much cooler temperatures.   This December day here in Pebble was probably the best weather in the entire country.  This was a day to score at Pebble and the winning group did just that with 9 natural birdies and won the event in a rout with an incredible score of 14 under par.  Second place was 9 under par.  It was a day where birdies were available if you could convert the putts.  The greens at Pebble were in professional tournament condition and the best I have ever seen them for this event.  The course was set up very well and fair with some difficult pin placements and the speed of the greens were far quicker than normal play.  The rough was playable but certain lies could be penal.   Our group finished fourth out of 20+ teams for a respectable showing of 6 under par-a few more putts could have dropped.  We had a closest to the hole on No. 5 at 2′ 5″ inches.  I had one of the more ridiculous holes of the day on number 9,  a driver, flubbed 3 wood and a second three wood that ended up 5″ away from the cup for a highly unusual par on the 470 yard par 4.  Golf can be a strange game and you never quite know what’s going to happen. (a bit like life)

Thanks to the Pebble Beach Company for organizing and executing this event.  A good time was had by all.