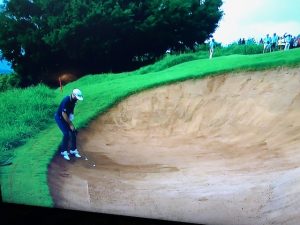 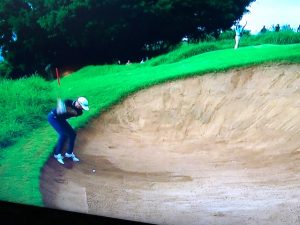 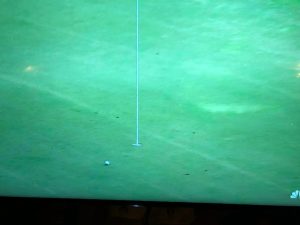 The first tour event is always the Tournament of Champions played in Kapalua, Hawaii.  The event features all 34 players who won in 2017 on the PGA Tour and the top 5 in the World Rankings.   Notably absent from this list was last year’s winner Justin Thomas and Master’s winner Sergio Garcia.  The tournament is played on the Plantation Course in Maui on the Kapalua side of the island.  This is a course designed for the long and powerful hitter so it played right into Dustin Johnson’s skill set.  There were some squalls, showers and some trade winds but nothing could stop Johnson.  He was on his game with 4 consecutive rounds in the 60’s for a total of 24 under par which bested runner-up John Rahm by 8 shots.  The highlight of the final day was Johnson’s drive on the par 4, 411 yard, 12th hole.  With a little wind at his back, Johnson unleashed a tremendous drive down the left side of the fairway which caught the ridge leading to the hole.  It looked like I was going to witness the first albatross I had even seen but the ball stopped 6 inches from the hole.  With that particular pin placement on the 12th, there is a slight uphill tilt at the pin and it seemed to me that this tiny bit of uphill caused the ball to stop.  Wouldn’t we all love 6″ putts for eagle, I would take 6″ for birdie or par let alone eagle.  It was quite a display of driving and overall shot-making by Johnson as no one in this field could compete with Johnson this week.  Rickie Fowler and Hideki Matsuyama finished tied for 4th at 14 under.  Jordan Speith finished 9th at 12 under par.  It was not a great week for defending US Open Champion, Brooke Koepka, who finished last at 13 over par-27 shots behind Johnson.

I highly recommend the Plantation Course at Kapalua whenever you’re in Maui.  There are multiple sets of tees to accommodate players of every skill level.  The professionals tee it up at a length that exceeds 7,400 yards capped off by the 663 yard, par 5, 18th hole.  Here the pro’s will drive the ball over 300 yards and catch the downslope to get to this green in 2 shots or have no worse than a pitch and a putt for birdie.  Mere mortals have to find the right position in the fairway  (center) and hit a second shot over the ridge  for a 100-150 yard third shot.  Mere mortals can make par here but the pro’s will be disappointed if they don’t make birdie.  The Plantation Course is fun to play and the tee boxes will present the appropriate degree of challenge that is desired.  You will hit every club in your bag.

Dustin Johnson is on fire and it will be not be easy to displace him from the No. 1 World Ranking.