The feedback from last week’s blog on the Ryder Cup was amazing so here goes Round 2 summarizing some comments from my “base.”

The USA players don’t really care about the Cup.  They say they do but they had an opportunity to experience the course by playing in the French Open at the end of June.  Guess what?-only Justin Thomas showed up.  Guess who was the best player for the American team in this Ryder Cup?-Justin Thomas who went 3-1. 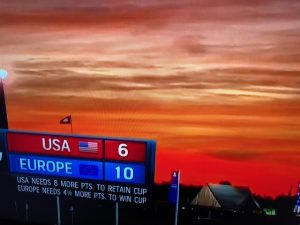 The Ryder Cup immediately followed the Tour Championship event on Sunday so the players would fly Monday to arrive in Paris on Tuesday.  The players were only playing for $10M over that weekend in Atlanta and now had to get over jet lag to play two practice rounds and get mentally ready for a barrage of vitriol from the European crowd.  Tiger Woods  had to be drained coming off his first victory of the year in Atlanta.

The selection of the US Coach is dubious.  It seems to be a lifetime achievement award instead of the best manager or leader than can get the most out of these professionals.    It’s easy to criticize Furyk and “Monday morning quarterback”  his decisions especially the selection of Phil Mickelsen as a Captain’s Pick.

The US PGA Tour is a set as a fiesta of birdies as the courses greet the 300 yard boomers with wide fairways and not so tough rough.  The USA players get to experience some real tough course setups usually at the US Open.    European courses are a lot tighter and a wider variety of shots are required to win on that Tour.

Since we couldn’t win the Ryder Cup on the golf course, I dispatched Steve Almassy to get over there and bring it back to the US.  As you can see, he was successful! 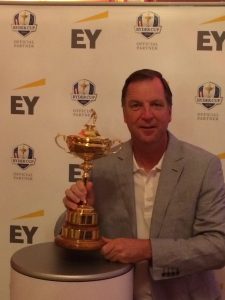 By the way, on a non Ryder Cup subject…it’s been reported that our favorite man in the White House has lost a significant amount of money on his investment in Turnberry.  His popularity is causing some fall-off in bookings at the hotel and his organization sank over $100M into the Alisa Course.  He also figured that Turnberry would remain in the Open Championship rota but that doesn’t seem to be the case.  I don’t think we want to see the balloon flying over Alisa during the Open Championship.  The Open Championship was last played at Turnberry in 2009 when Tom Watson almost became the oldest winner of the event but was denied by gods of golf as his approach shot to the 18th sailed through the green.  He lost in a playoff to Stewart Cink.  Turnberry is a great track irrespective of who owns it.