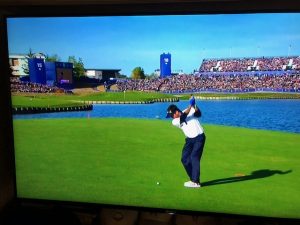 Bubba Watson on the 17th hole 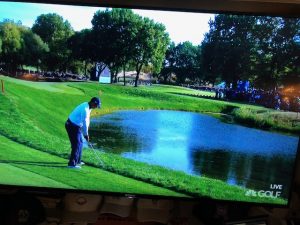 Tiger Woods out of the deep rough-a mighty blow 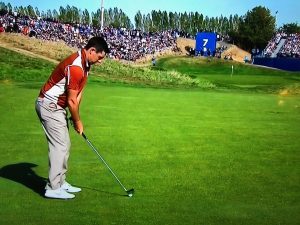 Rory McElroy after a huge drive 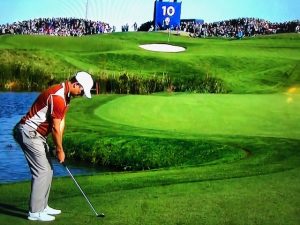 Justin Rose in position on the 10th hole

The European team stomped on Jim Furyk’s U.S. squad with a convincing 17 1/2–10 1/2 victory which was one of the more significant beatings in the history of this event.  So what happened?  The United States had a tremendous team of champions that had been playing well all year.  The team was dominated by the new breed of player where guys like Justin Thomas, Jordan Speith, Rickie Fowler all cheer for each other tour so chemistry should not be a problem.  Tiger Woods was coming off his fabulous season ending  victory at the Tour Championship and of course there is Dustin Johnson.  Well it turned out that the European squad played better.  Yogi Berra couldn’t have said it any better.

In the United States, The Ryder Cup is not an important sporting event.  Golf in the US is on an inexorable decline in the millenium era.  The event is also taking place during NFL football and the baseball playoffs.  In 2018, with the event in Paris, the golf fan is not going to get up early in the morning to tune in live.  In Europe, golf is a major sport from a participation point of view following soccer, rugby and cricket.  It is covered well in the media and emotions of the European golf fan run rampant in anticipation of this event.  While I was in Ireland a week before the event, a number of people asked me about my predictions for the Cup.  I told them that there was no way that we could lose.  The Americans could not be stopped and now the addition of Tiger Woods added an additional warrior to the cause.  The European team was good with the Fed Ex Cup winner Justin Rose, upstarts Tommy Fleetwood and General McElroy but the rest of them…..hah!  Sergio Garcia had a miserable season on the PGA Tour and Ian Poulter was in and out so the depth of the USA was insurmountable on paper.  Aha–on paper!  You actually have to get out there and play the game.

The venue for the event was Le Golf National’s Albatros course outside of Paris.  There is a European PGA tour event there and it will be the site for the Olympic Games in 2024.  The course is wonderful for the spectator with a number of great viewing spots.  In the Ryder Cup, there is definitely a home course advantage.  It’s now acceptable to cheer and ole’, ole’ yourself and don’t worry about the gentility of the sport.  Both teams now expect it and the roars are deafening.  The first tee on Sunday reminded me of a scene out of “Bravehart.”  The only thing missing was the horses-you would have thought Charlemagne himself was on the tee.  The Europeans had the advantage of course knowledge but the home team also has the luxury of doing things to the golf course that plays to their skill sets.  In this case, the idea was to take away the American power game–fairways were narrowed and penal rough was grown to catch any wayward tee shots.  The American bombers would have to be careful and it turned out to be a brilliant strategy for the Europeans.  Nevertheless this level of gamemanship was anticipated and the Americans should have been able to overcome these impediments.  After all–these guys are the best players in the world!

After a promising start in the morning fourballs on Friday, the Americans wilted in the afternoon and the carnage continued into the second day of competition and trailed 10-6 going into the singles matches.  The American team would have to generate momentum early so they trotted out their best players–Justin Thomas would play Rory McElroy in the first match and Brooks Koepka would play Paul Casey.  The Thomas/McElroy match was really good stuff as they battled each other shot for shot.  On the 12th hole, Thomas chunked his 3rd shot in the green side rough and then proceeded to hole out from there to make par.  McElroy had a 10 foot very makable putt for birdie but he missed it and the hole was halved.  They came to the 18th, all square, and Thomas blasted a perfect drive down the middle of a very skinny fairway.  McElroy took a mighty blow with his driver but the result was disastrous landing in the fairway bunker on the right with a fried egg lie.  McElroy was 187 yards to the hole but he had no shot-he would lucky just to get the ball out of the bunker–he couldn’t do it and now he faced a third shot from the same bunker at 185 yards.  It was virtually impossible even for one of the best players in the world and he struck a mighty blow that I could have made and the ball ended up in the water as it rolled in–it was clearly an amateur’s move to try to make a perfect shot and you couldn’t fault him for trying, he lay 5 going into the drop zone and conceded the match to Thomas who knocked his ball about 12 foot from the hole.  This was the highlight of the matches for the Americans and drew them to 10-7.  Unfortunately Brooks Koepka couldn’t take advantage of his monstrous drive on 18 dunking his second shot into the fairway bunker.  Paul Casey who was 185 yards out hit a perfect shot to the green with a 15 foot left for birdie.  Koepka hit a tremendous bunker shot to gimme range for an easy par.  Casey had a putt to win the match but he also couldn’t convert so the match ended all square.  Now it’s 10 1/2–7 1/2. and then  Webb Simpson upsets Justin Rose 3 Up–10 1/2-8 1/2–Tony Finau waxes Tommy Fleetwood with a torrent of putts and excellent play–10 1/2–9 1/2.  The next match would be critical–Jon Rahm vs. Tiger Woods.  Tiger didn’t have it and neither did Rahm–Rahm had some opportunities to close out the match earlier but it seemed that he was choking on the short putts in his rookie incursion into this event.  Finally, Rahm ended Tiger’s misery on 17 and that was it for any American comeback.  The American team managed to lose all of the remaining matches.  It was only fitting that Phil Mickelsen dunked a shot into the water to end his match against Francisco Molinari and the Cup would return to the Europeans.  Mickelsen was awful in this event and nothing much more needs to be said.

Molinari was the MVP of this event with a perfect 5-0 record to match his victory in the Open Championship.  The other significant highlight for the Europeans was the Captain’s picks who notched a record of 9-4-1.  Sergio Garcia and Ian Poulter continued their brilliance in this event.  The American Captain picks were 2-10 with Tiger Woods and Phil Mickelsen completely shut out.  The margin of victory of 7 points just happens to match the points of the Captain picks for Europe over the Americans (9-2).

Justin Thomas was the MVP for the American team and his victory over McElroy was the highlight for Jim Furyk’s squad.  Tony Finau emerged as a terrific force in this venue.

The blame game is starting to emerge from the carnage of this resounding defeat.  I would refuse to dignify this type of behavior by the players and I’m not even going to cover it.  Yogi’s explanation is the best at it certainly applies here, “They played better than we did.” The US hasn’t won the Ryder Cup in Europe since 1993 and I was happy to be present there at the Belfry in England.  It was fun to experience the roars of the crowd turn into an exasperated hush as Ballersteros and company were vanquished.  It’s now been 25 years since the US has won the event in Europe.

Undoubtedly the US PGA will try to examine what happened and what can be done to return the US to a state where they can actually beat the Europeans.  The Europeans didn’t really expect to win this year but they weren’t going to roll over either and they proved their mettle in these matches.  The margin of victory was mere icing on the cake.  Brandel Chamblee said it well, “This was not about a lack of chemistry; it was about a lack of accuracy.”

If the US wants to win this Cup in the future, they simply will have to play better.   How’s that for incisive analysis?