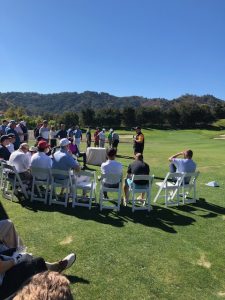 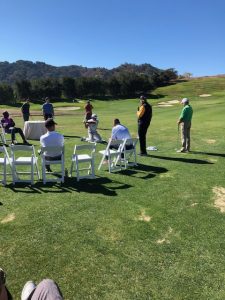 While Brooks Koepka and Dustin Johnson are duking it out for the World No. 1 spot in Shanghai, China this week, something more important was taking place at Cordevalle GC in San Martin, California.  It was the Steve Young-Jerry Rice Golf Tournament benefiting the Forever Young Foundation and the Tech Museum of Silicon Valley.  There are many charity golf tournaments that are continuously played throughout the year for any number of good causes.  This tournament is unique and differentiated in its approach.  I’ve known Steve Young for a quite a number of years from his playing days, to ESPN football commentator, investment professional and NFL Hall of Fame inductee.  He is self deprecating but determined and competitive to be the best he can be in all of his endeavors.   This tournament is more like a homecoming party  of close friends than a golf event.  There is a nucleus of players who continue to support the event year after year and eventually the nucleus grows as the circle of friends widens.  Steve has had Johnny Miller show up just about every year to conduct the pre-tournament clinic and Johnny holds court and gives all of us a few tips that unfortunately will soon be forgotten.  Johnny is usually joined by seasoned senior tour professionals such as Keith Clearwater and Mike “Radar” Reid.  Clearwater shows us every year how to hit 200 yard drivers from his knees.

I wasn’t aware than Johnny Miller had announced his retirement from golf commentating on NBC.  While I’m sure he has his reasons, I and many others will miss his incisive work in the booth.  Miller had the ability to translate what is going on in the professional’s head competing at the highest level on the PGA Tour.

Unlike other tournaments, every foursome wins a prize.  The banquet room for dinner is lined with prizes such as merchandise, tech toys and sports memorabilia.  The only benefit to winning the event is the ability to attack the prize table first and claim the biggest bounty.  Every foursome is called to the table on the order of their finish–prizes are distributed before the dinner not after the dinner which really enriches the experience.  People enjoy the dinner and really interact with each other since usually they’ve been coming here for years and the drone of speeches and congratulations is out of the way.

This year I brought my teaching professional, Jimmy Hutchings, to stack the team with Brandi Chastain.  Brandi really striped the ball off the tee this year and contributed greatly to the team.  Jimmy was pretty outrageous with a number of 300 yard plus drivers actually just missing driving the first hole by a yard.  Our putters let us down on the back nine and we ended up 13 under which I’m sure was in the middle to bottom of the pack.  It was a great time for a great cause.

The Forever Young Foundation is one of 66 charities out of 9000 to receive a perfect rating for excellence on donor accountability, organizational transparency and financial health.  The Foundation continues to advance the causes of providing resources for the development of children in all aspects of physical, mental and academic education.  Kudos to Sterling Tanner and Michelle Knox who continue to enable the great work that the Foundation does for children.

Post Script to Last Week’s Blog:  Toby Briggs shot a 4 under 67 at a Tournament in Stockton with the San Francisco Dons.