Note from the UK 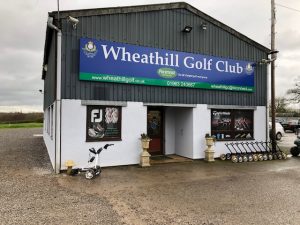 The professionals are in Hawaii blasting tee shots 350 yards and further in the brilliant sunshine and perfect conditions.  The PGA Tour in Hawaii requires a birdie fiesta–par just isn’t a good score there.  Gary Woodlands went into the final round last week  with a decent lead and was playing well but you just knew that someone was going to come out the pack to vanquish Mr. Woodland and take the trophy and a bunch of money.  Woodlands is a terrific player but has had a history of failing to close the deal on Sunday and last Sunday was another notch in the belt of failed attempts at victory.  He has the game to break-through and I wish him well in making this happen.

Now we are going to look at the opposite of the end of the spectrum.  Here in Somerset, England which is a few hundred miles southeast of London, we are in the gloom of winter. Having lived here in England from 1990-1995, the joys of the Christmas season and the holiday period before New Year’s Day are followed by complete depression as there is nothing but gray sky, cold temperatures and a raw feeling that rattles your very fiber.  It’s a lot colder with snow and ice over the rest of the European continent but at least the sun peeks through and there are periods of brightness and even some sunshine through the colder temperatures.  In England, there is nothing but gloom and it seems to get dark just after 1PM which is very depressing.

Brian Shirley and I headed to his golf club, Wheathill, to check out what we should do on this day of gloom.  I actually knew what to expect.  There was some light rain in the morning which I call– English “mizzle” which made course conditions ugly but playable if you wanted to trudge around.  Certainly, the 6300 yard, par 69, Wheathill layout will play longer than the 7700 yards at the Plantation Course in Hawaii.  There is no roll of the ball on the fairway, the cold weather takes the sting out of the modern ball and you could end up with a fried egg lie in the fairway or green.  During the winter, many courses in England close the tees and install the driving range mat.  Many of the greens are also closed and temporary greens are carved out of the soft fairways for the joy of automatic two putts to record your score.  Sounds like fun, doesn’t it?  It seemed to me that most people would stay home and vegetate  by the fire with a good book–that wasn’t the case at Wheathill–the car park was almost full and the course was populated with either die hard players or players whose wives wanted them out of the house for the day.  Brian and I surveyed the situation and said that even if we wanted to go play, this was not a day to be waiting behind players who would undoubtedly think they were playing in Hawaii.  A change in plans was in order and we decided to hit a few large buckets of balls on the range.  Now the range in Wheathill is not exactly what you might expect in the US–Wheathill’s range didn’t make it to my list of great driving ranges in “Through the Green.” The turf was a bit soggy so portable mats were in use–a total of 2–which is all we needed with the pails of balls we had procured from the golf shop.  These balls are a combination of lost balls from all over the world and beaten up range balls from a number of other “ranges” throughout the area.  I really chuckle when I see a Topflight golf ball because no one would be caught “dead” harboring a Topflight ball in their bag.  These balls probably had no more than 50% of the compression of a branded ball that resides in your bag.  These are important points when hitting range balls at Wheathill since wonderfully struck shots are essentially going nowhere.  Nevertheless, I approached the task with relish.  I have my Taylor Made “blade” irons which I purchased in 1987, a power blue overjacket purchased in 1990 for my first Irish golf trip with a MAXFLI beanie which has to be a collector’s item.  (I don’t know who would want it but it has to be a collectible).  The driver was a Taylor Made R-9 (about six generations old) and a 10 degree Ping driver with a very fancy shaft.  The interesting part of the English bag that resides here in Brian’s vineyard garage, is the Callaway Big Bertha-7 wood.  I have four of these including one in my normal bag today.  The 7 wood is the common denominator in all the non-resident California bag and has been the most reliable weapon in my arsenal.  In any event, the practice regime was fortunately very boring as everything was in working order as the shots were straight and true to the target.  We then 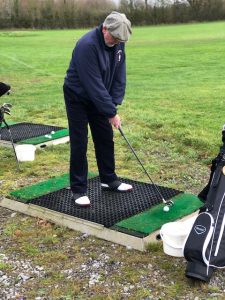 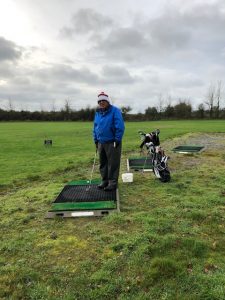 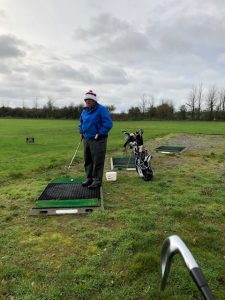 proceeded to the practice putting green.  I have an “ancient” Ping putter which still works very well.  It seemed the longer we were out there, the colder it got and the wind chill factor continued to bring a substantial chill even through the MAXFLI beanie so we called it a day.

I told Brian we might be accused of being “wimpy” about all this and perhaps we should have gone out and played the course.  After all, I said, “In 1991, “we went out and played Mannings Heath in West Sussex on a snow covered golf course with four yellow balls.”  We actually returned with 3 of those balls.  You would hit a shot and then clear away the snow from the frozen turf, clean the mud off the ball and hit again.  Brian replied, “Sure, that was 27 years ago, we were younger and dumber.”

I was pleased.  I owe it all to my teacher, Jimmy Hutchings at Cordevalle, who has put me in a position to hit golf shots reliably and mechanically without stressing about it.  He has instilled confidence and this practice regime in these poor conditions demonstrated that.

← The Year in Review Winter/Mission Hills Golf in China →