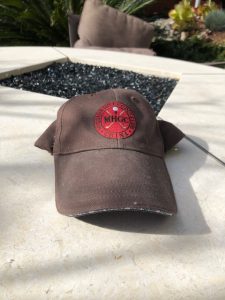 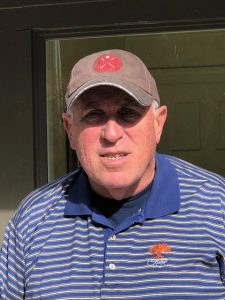 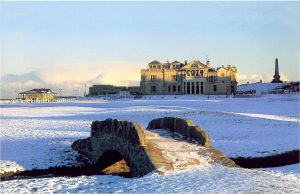 January is the worst month of the year.  It’s a natural downer coming off the Christmas and  all the other holiday festivities.  The weather doesn’t bother us in December but after New Year’s Day, the gloom sets in.  The days are shorter and in Europe, particularly the UK, it seems to starting getting dark about noon.  I left for Europe on January 4 where it was freezing cold in Germany and Switzerland accompanied by twelve inches of snow in Zurich.  I mean, really, it is Winter so what’s to complain about–we expect this type of weather but it just isn’t what were used to.  It’s pouring rain in the Bay Area which is needed to nourish our water supply for the rest of the year.  In any event–blah.  In the Bay Area of San Francisco, we can play golf all year but in winter, you have to slosh around in some muddy conditions and walking is a chore as the distance is magnified by your shoes (and your legs) sinking into the soft fairways.  The courses play a lot longer than the yardage because there is no “roll” from the soft fairways and if the wind blows, it goes through you like a knife.  For those of us that endure all of this, it’s fun to be a “mudder” since the conditions present another challenge to your golfing skills.  You can actually get some real comfortable clothing to play in these conditions including rain gear, rain gloves, jackets, beanies and rain proof hats.  I found it’s usually impossible to play with an umbrella especially in the wind so your rain-proof wear enables you to gut it out.  Rain gloves take away the excuse of wet grips as the gloves actually make the grips better than dry weather and stick to the club like glue–no excuses.  Winter golf is challenging and very different from the rest of the year and a legitimate to increase your handicap.

For the professionals, January means Hawaii and Palm Springs, California and tournaments where you have to shoot 25 under par to win.  The courses they play should be lengthened to 8,000 yards or more to get some level of competition.  No lead is safe in these events as Gary Woodlands found out last week.  He played well every day but Xander Schauffle caught fire on Sunday and bested him in the final round.  After three rounds, Phil Mickelsen is “on fire” shooting 60 in the Desert Classic and following up with a 68 on day 2.  It will take four consecutive rounds in the 60’s to have a shot to win the event but at 48, Phil seems to have significant momentum in 2019.  Alas, the same thing that happened to Woodlands happened to Mickelsen.  He played very well on Sunday from tee to green but simply could not convert the putts and was bested when Alan Long sank a 12 ft. putt on the 18th hole to win the Desert Classic.

I was stimulated by a blog post that I looked at the other day in a group that is named “Places to Play.”  The piece was about the Mission Hills Golf Club in Shenzen, China.  I’ve played there and following here is my experience there.   The experience is pretty unique since I played in some interesting circumstances.  I was in Shenzen for business and to attend a series of meetings at a US company with its factory and engineering operations in Shenzen.  Shenzen is a huge industrial area just outside of Hong Kong in mainland China where a number of US multi-national companies have operations there.  The week before I left for the trip I developed significant pain in my right elbow with no idea of the reason or source for the pain.  By Sunday evening, the pain was incredible and I was unable to raise the hand.  I couldn’t eat, shave, brush my teeth or lift the hand more than a few inches vertically.  I was leaving for China on Tuesday so something had to be done.  I visited my personal physician, Dr. Leslie Weeks, who took a look and stated that we would have to administer a cortisone shot to the elbow to try to restore movement.  He didn’t know if the shot would work or how much flexibility could be restored.  The executives in Shenzen had already scheduled golf at Mission Hills for this coming Saturday and Sunday and I was expected to play and perform.  The pain in the elbow subsided a little but I was not going to be able to swing a golf club by Saturday at this level of flexibility.  Saturday came and I decided the arm had improved to the point that I might be able to hit some half shots.  Of course, I decided to “go for it” but I couldn’t go all out.  I told our group about my malady and I decided to play but I would play with just 3 clubs–a 7 iron, pitching wedge and a putter.  I felt I could hit the 7 iron, 150 yards with the level of flexibility that I had and I told them I would have to play from the ladies tees to be able to keep up with the group.

Mission Hills Golf Club is the largest golf club in the world and, in my view, will never be duplicated anywhere else.  Mission Hills has 12 regulation style 72 hole golf courses and during the weekend, is fully packed with over 1,000 golfers playing at any one time.  The club employs 14,000 people and has over 4,000 caddies.  I found the two courses that I played (Faldo and Els) to be non-descript and fairly average layouts.  The greens were horrible and you could actually putt with a 7 iron which is how slow they were.  I’m sure things have improved since I played there but my experience would be a one-time event.

On Saturday, I played with the 3 clubs and fortunately was able to hit the seven iron in the fairway every time just about 150 yards.  Thanks to a few birdies on the par 3’s-I shot 87.  The round took 6 hours which was driving me particularly crazy as there was (or maybe is) little to no etiquette as to how the Chinese go about their business.  On Sunday, our tee time was 3PM and I inquired as to how we could possibly finish the round especially given it would probably take another 5 hours at least.  Mission Hills has lights so night golf is possible-as long as you keep your ball in the fairway or close to it–you’ll have no trouble finding the ball.  Flexibility in the elbow and right arm almost completely returned and I put a 3 wood in the bag in addition to the other clubs and played from the regular men’s tees and shot 85.  It was 8:30PM before we finished and the place was nearly empty which was a very weird feeling like being in an empty airport.  It’s something you should do once but I’m not pining for a repeat performance.

← Note from the UK PGA Tour Stop--Torrey Pines, Putting with the Pin →