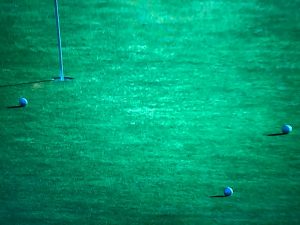 Final 3 shots at 18–all made birdie 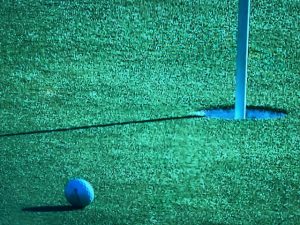 Rose stomps the competition at 18 on Sunday 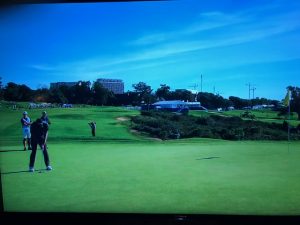 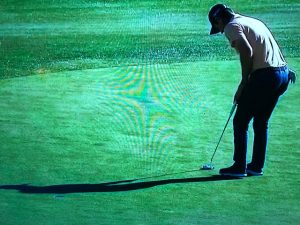 Rose makes a critical putt on 16 to save par

Justin Rose nailed his 10th PGA Tour victory with a methodical run of the mill, ho-hum mastery of the South Course at Torrey Pines in San Diego.  The South Course is the last venue where Tiger Woods won a major championship besting Rocco Mediate in an 18 hole Monday playoff.  Woods was writhing in pain that day in June, 2008 and made some fantastic shots to defeat Mediate, an unlikely opponent at the twilight of his regular PGA career.  Woods would not be a factor in this event and finished 20th.  He played well in many spots but consistency on the PGA Tour is a must if you’re going to win.  All of us know that we simply “can’t miss shots” if we’re going to contend to win anything in this game.  Tiger seems to be “bigger” than the game itself which has its pluses and minuses.  It’s terrific that Tiger generates media interest in a game that is suffering nationwide with reduced participation especially among the millennial generation. However, for me, the excuses are becoming to “get old” as every week, it’s either this or that.  Woods is 43 and he misses fairways with regularity–sometimes these days he putts really well and other days he doesn’t.  He has become a regular Tour player and is no longer the World No. 1 and it’s unlikely that he will ever be No. 1 again.  So what!   He is still capable of winning on tour, he’s still capable of winning a major championship, he’s still perhaps the best player of all time but I would submit that honor belongs to Jack Nicklaus.

Rose is currently the World’s No. 1 player and he mastered the South Course with amazing precision.  He bogeyed 3 of the first six holes to start the final round and then decided that enough was enough.  He made some swing changes in the past few months and perhaps he was beginning to come apart a bit.  No way, he hunkered down made some birdies and ended up at 21 under, which is one of the best results ever in this event. The CBS broadcast which features the iconic Jim Nantz and sidekick Nick Faldo tried to create drama as Adam Scott tried to make a run at the lead but never came close.  Nantz and Faldo can be insipid at times and this broadcast was not one of their finer moments.  I haven’t seen any numbers but I’ll bet ratings were poor with Tiger out of it and Rose just turned everybody’s lights out.   Nantz droned on about Adam Scott’s chances and Faldo created false expectations of drama for the viewing audience.  There was no drama–Rose turned the lights out.  After thinking about this for a moment,  my memory returns to Joe Buck and his band of incompetency on Fox and I muse that Nantz and Faldo are okay even if this wasn’t one of their finest days.

Rose emphatically completed the tournament with a precise 120 yard approach on the 18th hole over the menacing pond to about 3 feet from the hole.  It was over and Rose now owns the most victories on the PGA Tour for any Englishman including Faldo who has nine.  Rose is a model of consistency at this point in the season as he maintains a strangle hold on the No. 1 position in golf.

Ah! , one of the new rules changes allows you to putt with the flagstick in the cup.  It’s a bit amazing to me that professionals would putt in this manner but it was highly in vogue in the tournament.  Apparently there are some statistics (which I haven’t seen) that reveal that putting with the flagstick in the cup generates better results than taking it out.  We’ve all putted in recreational golf in the past with the flagstick in to speed up the game–okay-maybe this could save 10 minutes in 18 holes but we’ve all done it.  I suppose this will be the next statistic generated by the PGA Tour analytical geeks.  It will be right up there with sand saves from a fried egg lie.