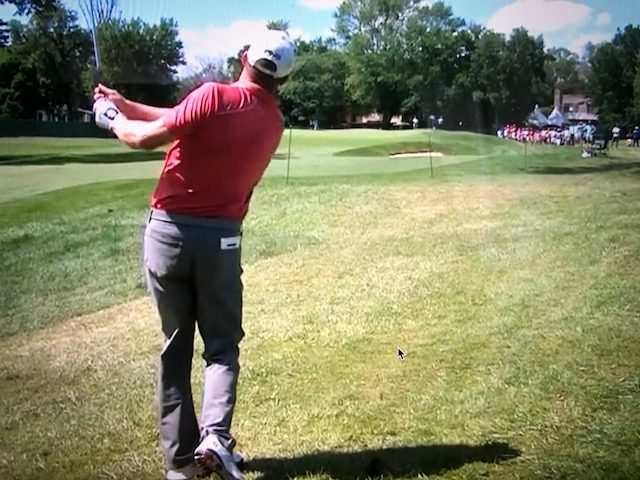 I usually would have no interest in watching the Rocket Mortgage Classic from Detroit, Michigan on a Sunday especially when the Yankees were playing their ultimate rivals, the Boston Red Sox, in London.  Truth be told, fortunately the baseball game was just about over when the golf telecast began.  My interest was seeing if Nate Lashley could close the deal with a six shot lead going into the final round.  I had the pleasure of playing in the same group as Nate during this year’s AT&T Pro-AM (my Pro-AM partner-Roberto Diaz didn’t make the cut here).  Nate is a pretty big guy and seems to have some moving pieces in his swing.  It really works for him and he has the focus and intensity to compete at the highest levels of the game.  His short game was razor sharp this week. 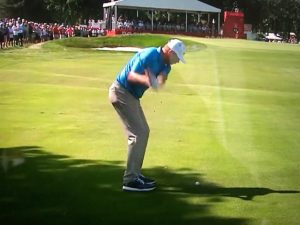 Nate is quiet, intense and can be fiery at times on the course, which certainly isn’t unusual for the professional player. The big challenge for Lashley would be to see if he could close the deal with his six shot lead going into the final round.  It is often happened on Tour that the third round leader with a big lead has fallen apart in the final round with the pressure of winning for the first time on Tour can be daunting.  A PGA Tour win means so much to the player that it has to be “tuned out” to stay focused on the task ahead in the final round.  Nate had the ability and the experience of playing on Tour to pull it off with very good focus and course management to win the event.  His caddie, Ricky Romano, is a very positive force for him in controlling his emotions and enabling his focus.

I have an interesting example of the Lashley/Romano team.  In the Final Round of the US Open at Pebble Beach, I was following Nate on the back nine.  His tee shot on the par 5, 14th hole found the left hand rough.  Nate seemed pretty annoyed when he got to the ball as the drive was almost 300 yards off the tee and managed to end up in the second cut of rough.  Nate surveyed the lie, which was terrible as the ball was sitting pretty far down, and immediately grabbed his 3 wood.  I could see that this seemed to be an impossible lie for a three wood.  Nate wasn’t going to win the tournament but it seemed to me that a par on this hole from this lie would be a very acceptable outcome.  Nate obviously had other ideas and really wanted to hit that 3 wood as he took a bunch of practice swings and prepared to hit the shot.  I thought this could be a disastrous move.  I wasn’t alone-his caddy Ricky Romano intervened and negotiations began.  The first topic was the poor condition of the lie and the risk posed by this shot.  Ricky suggested an iron shot to the 100 yard mark where Nate would have a good chance of making par.  Ricky was absolutely convinced that Nate could execute this shot with 100% confidence as opposed to the uncertain outcome of trying to hit a heroic shot out of deep rough with a 3 wood-250 yards from the hole (even for a professional).  Nate wasn’t convinced,  He is fidgety and continued to cradle the 3 wood with a bunch of practice swings.  Ricky didn’t intervene in all of this and kept his distance from Nate hanging close to the bag ready to pull an iron for him.    He knew that Nate was upset with the bad luck from a tremendous tee shot and he needed the time to let those emotions clear themselves.  Finally, Nate went back to Nate and discussed it a bit further and finally the 3 wood went back into the bag with a thud.  Nate grabbed what seemed to be an 8 iron and knocked it to the 100 yard mark.  Nate would go on to finish at 1 under par for the tournament and finish tied for 28th place.  That decision probably prevented a bogey or worse which placed at least 10 places higher in the final standings.

It’s great to see this type of victory and I continue to believe that it demonstrates the pyramid of golf competitiveness, which we as amateurs cannot even begin to comprehend.  I covered this topic in “Golf Chronicles” (Chapter 11) where the level of skill required to achieve in golf is exponential requiring mental toughness and focus.

Steve Stricker cruised to victory with an easy victory in the US Senior Open at the Warren Golf Club at the University of Notre Dame.  Stricker seemed to be playing a 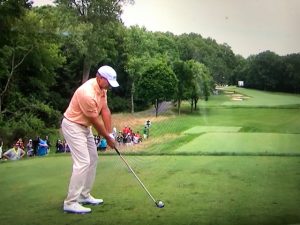 $5 nassau with accurate tee shots, greens in regulation and outstanding putting (which is his forte).  He was never pressured by the competition.  His wife, Nicki, caddies for Stricker and is a fine player in her own right.  Thankfully the Fox broadcast did not feature Joe Buck, which almost made it watchable.  Unfortunately, good commentary by Curtis Strange could not completely offset the rest of the Fox crew who are still pretty horrible including Brad Faxon.