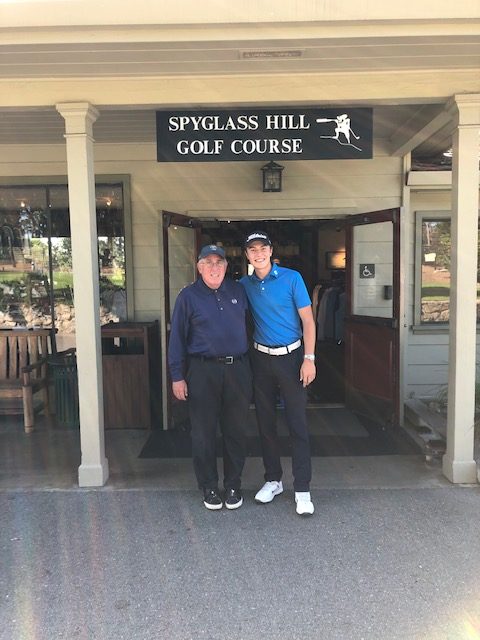 It’s August and we’re in Pebble Beach.  No airports, no crowds, no traffic, no travel and most importantly-no heat.  It’s 65 degrees here and very quiet as we commute back and forth to the golf club, which is a mile away.  I know that I’m gloating but after three trips to Germany and China this year without recounting the US travel, it’s a welcome respite.  It’s the stay at home (second home) vacation.  This week is Pebble Beach’s grand auto show, the Concours d’ Elegance, which will bring a bunch of billionaires to town to boost the local economy where funny money will be spent on vintage automobiles.  Cars that sell for millions of dollars is kind of a warped example of what’s wrong with our society but, on the other hand, these type of events have been going on for years and a represent a token of the fortunes of these tycoons.     We also have the other side which is the Northern California Golf Association’s Match Play Championship. These participants can’t get a local hotel room within 25 miles due to the Concours as the prices have skyrocketed to unraffordable levels.  Some of these kids are commuting daily from the East Bay, which is over 3 hours away.  These kids can really play and they are near the top of the golf skills ladder driving the ball over 300 yards consistently on most of the holes.  Spyglass fairways usually don’t run very much in the musty humid air of the Pebble Beach summer but this week the sun was up and the fairways were running.  .  We housed  Toby Briggs, who plays for the University of San Francisco, who reached the Championship Final.  In the first two days of stroke play, he was 3rd in the field of 156 with an even par total of 142.  Spyglass, as many of us are aware, is a pretty tough track but conditions here this week are as benign as they will ever be with little to no wind and warmer temperatures.   Nevertheless, the scoring and skill levels of these players is outstanding.  An example is the par 5, 14th hole where Toby and his competitor both hit drives of approximately 300 yards leaving about 235 yards to the green with a large pond on the right that guards the left side of the green. Most players including the PGA professionals will hit a layup shot in front of the pond to the 100 yard marker.  These two guys went for the green and both executed their shots to perfection despite having a poor angle to the hole.  Most players including PGA professionals will hit a layup shot in front of the pond to the 100 yard mark.   Toby hit a fairway bunker shot on the 13rd hole that most professionals would drool over-he nailed to less than five feet from the pin, which was in the rear back left position on the hole.    Toby ended playing the No. 1 seed-Josh McCarthy in the 36 hole final and he ran into a buzz saw.  McCarthy played flawlessly as he had played all week and became the 2019 Champion with a convincing victory.  McCarthy is a senior at Pepperdine University with a stellar amateur record and Josh and Toby played together in the first round of stroke play qualifying.  McCarthy was the No. 1 seed in the tournament and is ranked as the 97th best amateur in the country. 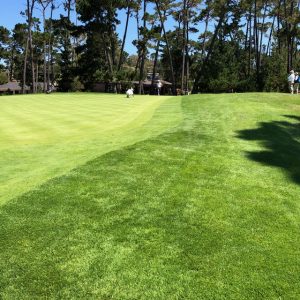 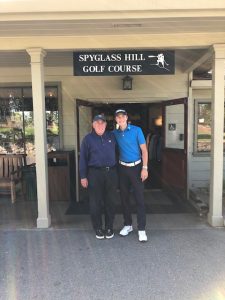 Slowplay was back in the golf highlight reel this week as Bryson DeChampeau meandered around the golf course annoying his playing partners.  DeChampeau was not “put on the clock” so it became a sniping contest as Brooks Koepka and Rory McIlroy made some comments about it.  We can write an encyclopedia on the perils of slow play and make a number of recommendations to eradicate it but we all know that this is not going to happen.  What really bothers me is that I’m convinced that slow play stunts the growth of the game.  People who don’t play golf always say that it takes too long.  Comments from Brooks Koepka and Rory McIlroy are relevant in bringing the issue to the forefront.  The PGA Professional is supposed to be a role model for pace of play and I believe that, in general, they are failing to meet the objective.  Koepka and McIlroy voiced their concern that until the PGA Tour enforces slow play contestants through existing rules by imposing stroke penalties for slow play, slow play will continue.  Every day  the average player or high ranking amateur emulate the professionals and the situation proliferates.  What is even worse is the rounds in amateur tournament play can and often become six hour affairs.  Last year, when I played in the Bandon Dunes National Championship, 18 holes had to be completed in 4 1/2 hours or less–if the contestants failed to meet the time requirement-a stroke penalty would be incurred by the team.  It seemed to me that in this event, the contestants moved quickly and were aware that the penalty would be imposed if the time requirement for the round was not adhered to.

A major reason for slow play is a general prevailing condition in our society of entitlement whereby the player believes that they are not responsible for playing the game at a pace that enhances the experience for all the players on the course.  The high skill players in the game, irrespective of age, tend to emulate the PGA professional’s behavior especially on the putting green.  Last week on one hole, DeChampeau took over 2 minutes to size up a putt.

The game will continue to suffer the ills of slow play until it is legislated out of the game at the PGA Tour level and the governing bodies of the Rules of Golf.  It’s highly unlikely that this well ever happen with the consequence of a continued gradual decline in the game.

Justin Thomas overcame an onslaught from the field to pull and win the BMW Championship at Medinah No. 3 in Chicago.  The professionals brought this difficult golf course to its knees as it rained nearly every day.  With soft greens-the professionals could go for every pin virtually without risk so scoring was ridiculously low.  Thomas won by 3 shots over Patrick Cantlay.  Matsuyama came back from 28th place during the final round to finish 3rd overall.  The Tour Championship starts Thursday at East Lake and I’m pretty confused with the new scoring whereby Thomas is the Fed Ex point leader by virtue of this victory.  It’s confusing to me that how Brooks Koepka who won 2 majors ends up finishing second in the Fed Ex point standings.  Under this new scoring system, Thomas will enter the Tournament 10 shots ahead of the 30th place player and have a 2 shot lead over Koepka without picking up a club.  Professional golf scoring is beginning to resemble or trying to compete with Major League Baseball’s new penchant for analytics.  It will be interesting to see how this all transpires next week.

← Tom Watson The Tour Championship Exposes the State of the Game →