Watson was 60 years old when he entered the 2009 Open Championship at Turnberry.  He had been playing very well and Turnberry was the kind of course that you could maneuver your way around without driving the ball 300 yards off the tee.  Tom had won one of  his 5 Open Championships at Turnberry and he was pretty confident coming into the event.  It was pretty amazing that a player at age 60 could tee it up with tour professionals who were 30-40 years younger than him.  However experience and determination are powerful factors when competing in a major championship.  Watson was executing his game plan perfectly and held the lead for most of the tournament.  Fast forward to the Final Round and Watson comes to the 18th hole with a one shot lead.  Stewart CInk has come out of the pack and can only wait by the green to accept the fate that the gods of golf will deliver.  It is at this moment that the world of golf and the media start to figure out that Watson could be the first professional golfer to win a major championship at age 60.  TV’s across the globe began to focus on the potential of this accomplishment and the audience swelled to see if Watson could close the deal.  It seemed that the entire viewing public was collectively pulling for Watson and praying to the gods of golf to achieve a result that had never been accomplished.   Watson’s tee shot found the middle of the fairway and now he had 181 yards to the green accomplishing the first step on the march to victory.  The day was bright with brilliant sunshine and a following wind made the course “fast” and so club selection would be important.  All Watson had to do was put the next shot on the green and two putt for a par and the championship.  Watson selected an 8 iron from 181 yards knowing that ball might bounce hard on the firm turf with the following wind.  The green was rock hard and crusty from the wind and the sunshine.  An 8 iron should be enough to just get there and have the ball roll forward to the back pin position.  The shot came off the club just as Watson had hoped and flew straight and true toward the green and took the bounce in front of the green.  I don’t think any of us  know what happened to that wonderful shot but the ball landed and careened through the green.  How could this have happened?  The club selection was perfect, the execution was perfect, but something happened to that ball when it landed as it streamed through the green and landed what seemed to be 18 feet past the back pin.  It seemed that one of the gods of golf had landed on the green and used its galatic broom to sweep the ball across the putting surface.  .  The crowd gasped in disbelief and the media was literally speechless at this horrible result.  Time stood still–how did that shot get through the green?  Watson was stunned and now things start to spin out of control.  We have all it great shots that ended up in very strange places with very strange results.  The tendency is to let the emotion get the better of you.  For Watson, 71 holes was a distant memory–all the good karma from having the lead for so long was now in question. He is the consummate professional but he is also a human being and this was the opportunity to do something that had never been done in a major championship.  Watson now had to get up and down from a very tricky place to claim the Claret Jug.  In these conditions, time speeds up and everything is out the window–experience, timing, 5 Open Championships won,  If this is the Buick Open, Watson gets it up and down 99% of the time but not now.  The chip shot looks difficult–the green is crusty and the ball will be difficult to spin on this surface.  Watson is a master of these shots–he holed the chip shot in the US Open on the 17th hole on a shot infinitely more difficult than this–but that was 27 years ago.  The big difference is that Watson and Nicklaus were in a duel down the stretch so bad luck hardly registers a difference in these type of competitions.  The crowd settled down as Watson contemplated the chip shot and you can feel the tension right through the  television set.  Watson was quick to play in my view in these circumstances.  He seemed tentative over the shot, still hot and angry inside and fighting to control his emotion.  The shot clipped off the wedge and he knew it was over for him-the ball nestled past the hole between 4-5 feet with a devilish break that should have never come into play.  He was clearly disappointed with the effort and disgusted…and now the internal body clock speeds up again.  He was angry-It was unfair-he hit the best 8 iron of the day and shouldn’t be in this position.  At this point, the mind conjures visions of multiple misses of four footers that had plagued Watson in the latter part of his career.  Unfortunately the negative memories always seem to outweigh the positive ones in the game of golf.  It seems to me that players such as Nicklaus and Woods didn’t seem to suffer these problems and just powered through them with their outstanding skill, focus and determination .  He simply missed the putt and it never really had a chance of going in–I believe Watson stood defeated from the enormity of the situation.  The crowd collapsed into a collective groan and the gods of golf smiled that this 60 year old individual was not going to win his 6th Open Championship.  A playoff against Stewart Cink would be an afterthought and I’m sure Watson doesn’t even remember it.  Cink became the infamous unlikely winner of the 2009 Open Championship but everyone will remember who the runner-up was. 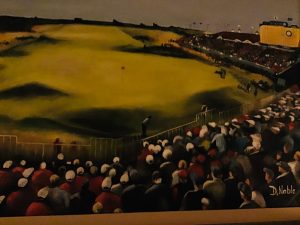 Watson, as usual, was classy in defeat.  He was clearly disappointed and did not bemoan his bad luck.  His career would not be defined by this defeat.  His golf swing is one for the ages and enabled him to play competitive golf at a very high level until the age of 69.  He is an impressive man, player and role model for golfers everywhere.

The world of golf produced another unlikely winner of the Women’s Open Championship held at Woburn CC.  Hinako Shibuno became the first Japanese player to win a major championship in 42 years.  It was also the first major championship she ever competed in.  The tournament came down to the final putts on the 18th green.  Lizette Salas playing in the next to the last group had a five foot putt birdie putt to tie for the lead and pushed it past the hole for a par.  Shibuno, deemed the “Smiling Cinderella” cans a 15 footer which looked like a freight train as it approached the hole and would have been 10 feet past the hole but it hits the back of the hole and goes in for the Victory.  Golf can be weird!!