The Business of Golf…et al 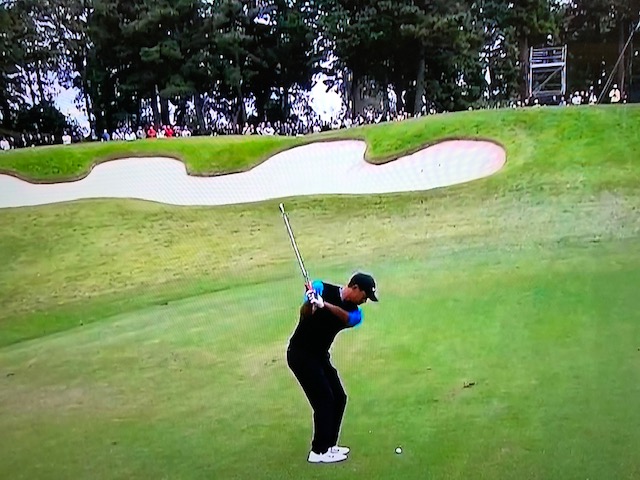 I was very surprised last week to hear a discussion about the potential investment values of golf companies and the growth potential of the sport.  This discussion was being held on CNBC, which really surprised me.  The companies discussed were Callaway and Acushnet (parent company of Titleist).  I was very surprised since I have widely held belief that it is very difficult to make money in the golf business.  How many of you remember brands such as Hogan, Big Bertha, Founders Club, Descente, Turtle and countless others.  I decided to take a closer look at the top 3 golf companies–Callaway Golf, Acushnet Corporation and Taylor Made.  Callaway and Acushnet are public companies whereby Taylor Made is a private company owned by private equity interests.  Nike also has a huge business in golf and golf apparel with Tiger Woods as its chief standard bearer.

My research proved to me what I had been thinking all along.  The business of golf is tough and it’s very hard to make money.  These companies project positive outlooks for the business but for very different reasons, which I found very interesting.  These companies approach the business very differently.  60% of all current golfers are under 50 years of age but this means that 40% of all current golfers are over 50–not necessarily a great thing for a sport.  30% of all players are currently under 34 and it seems to me that this situation will have to increase for these companies to grow and be successful.

Callaway had a near death experience awhile back and the company was restructured with the current CEO.  The company currently is No. 1 in total golf club sales and No. 2 in total golf ball sales.  It adopted a number of operational improvements in order to survive and get new products to market.  It seems to me that the company realizes that the basic golf business is essentially flat so it has moved into apparel by acquiring brands such as Travis Mathew, Ogio and others to grow the revenue base.  The company also invested in Top Golf and owns 14% of the company.  Callaway paid $72 million for their 14% which valued Top Golf at $512 million.  Today, Top Golf’s valuation is estimated to be $2.1B, which would put Callaway’s stake at $290 million.  The investment in Top Golf reflects Callaway’s strategy of trying to change the demographics of the golf market by recruiting more millenials into the game with the Top Golf concept.  Callaway has risk in the apparel market as clothing brands come and go as we’ve seen over the years.  It takes significant market capability and dynamics to maintain brand identity.  It also takes a significant amount of cash to run these businesses which are working capital intensive.  Callaway has close to $500 million in debt with $80 million in cash.  Total revenue for the company is $1.7 billion.  The company’s current stock price of $21 gives the company a market capitalization of $2 billion.  Callaway’s investments in apparel and Top Golf will probably drive the company in the intermediate term as competitiveness in the golf company world isn’t likely to change that much–it’s a long road to growth.

Acushnet owns the Titleist brand which is the undisputed leader in golf ball sales.  Acushnet also owns iconic brands such as Footjoy, Pinnacle and Scotty Cameron.  (Tiger Woods uses a Scotty Cameron putter). Golf ball sales increased about 5% last year so it seems that Titleist continues its leadership as Callaway’s sales were essentially flat.  Acushnet caters to what it calls the “dedicated golfer.”  The dedicated golfer is the golfer that is always interested in investing in improving performance and therefore is willing to pay the price  Acushnet is all about the golfer and doesn’t seem to focus on the recreational or occasional player.  They have the largest patent position of any golf club manufacturer with over 2X the number of patents over any of its competitors including Callaway and Taylor Made.  Acushet’s Titleist golf clubs are No. 1 among PGA Tour Players but sales this year to date are down 15% so some market share shift is occurring.  Acushnet’s apparel unit has tried a new brand with KJUS brand but initial results seem tepid to see the least.  Footjoy is an old brand that requires a boost as well as it has been impacted by the new series of comfortable golf shoes from a number of players such as Ecco and others.  Acushnet is not the kind of company that would invest in Top Golf.  It has a traditionalist bent and seems to primarily interested in the serious player  Revenues and profits are slightly higher than Callaway as margins are better.  Financial position is no better with $400 million in debt and $40 million in cash.

Taylor Made is a private company based in Carlsbad, California.  It was bought by a private equity firm in the mid-2000 period.  Taylor Made seems positioned between Acushnet and Callaway with their product lines.  They seem to have made significant gains in apparel with the Peter Millar line, the new Spider putter (which I believe is a favorite of PGA professionals including Rory McIlroy).  Taylor Made continues to innovate and provide new alternatives for all levels of players straddling the line between Callaway and Acushnet.

I personally prefer Taylor Made and Titleist clubs but I still carry a Big Bertha Callaway 7 wood and a 56 degree wedge which are over 20 years in my bag.  I have a set of Titleist irons from 1988 that reside in Brian Shirley’s home in England.

Top Golf is golf’s answer to big pin bowling of the 1960’s era.  Top Golf is essentially a facility designed to entertain with golf as the centerpiece.  Multi-deck driving ranges remind me of Japan where the players drive balls into target areas and various games and competitions are possible.  The facilities include bars, live music, restaurants where the customer can hit golf balls and have a great time without the five hour round on the course.  Players of all skills can participate and many of the locations have teaching professionals ready to enable the customer to improve and potentially take the game more seriously on to the golf course or not.  Top Golf has 55 locations throughout the country with a few locations overseas as the company attempts to go global with the concept.  There are rumors that Top Golf will attempt to go public in 2020 and cash in on this concept.  Callaway is a believer in this concept as they have invested early in the development of the concept.  These facilities are expensive to build and operate and hopefully will drive more millenials into the sport.

My conclusion is that investing in golf is not a great place to look for financial returns and these entrenched companies will continue to grow participation in the sport to increase the size of the market.  Hopefully Top Golf will not go the way of the bowling alley.

Tiger Woods won a tournament in Japan (the ZOZO classic) in very impressive fashion.  He started the tournament by bogeying the first three holes but that was the worst of it.  He played relatively flawlessly over the remaining 69 holes with a comfortable 4 shot victory.  He made a slight change in his putting stroke and this was the key to his 82nd tournament victory.  Tiger now has achieved parity with the legendary Sam Snead and is now a victory away from eclipsing a record that has stood for almost 40 years.  Tiger’s victory was another phenomenal achievement beating a very good field that included US Open winner Gary Woodland and local favorite Hideki Matsuyama.  Tiger’s performance was largely unexpected especially the way he finished the regular Tour season where he failed to qualify for the Tour Championship at East Lake.  He looked as fresh and in form as he performed at the Masters so you would have to conclude that there is a more good golf left for the best player of all time renewing the argument of whether Tiger or Jack will be the greatest.

Japanese golf courses tend to be boring with fairways shaped with severe contours and crooked lies in the rough.  Examples shown here are typical shots faced by all participants.  There is a certain degree of “sameness” in most venues in Japan.  Greens are usually slower than the regular tour stops and the man with the hot putter certainly prevailed this week. 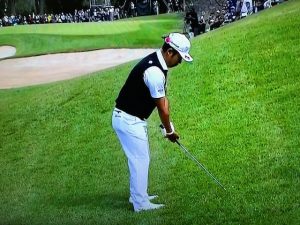 Matsuyama with another typical side hill lie in Japan 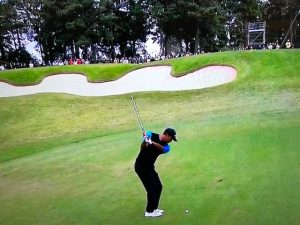 Tiger’s approach to the 14th green

CBS Sports did not renew the broadcasting contracts for Gary McCord and Peter Kostis who have been on the golf broadcasts for the past 35 years.  McCord was unceremoniously removed and will be replaced by Trevor Immelman.  McCord, unfortunately, will be be best remembered for his “bikini wax” comment that got him removed permanently a number of years ago  from the Masters in his description of the greens at Augusta.  I was never a McCord fan as he prattled on to a number of insipid attempts of humor and Kostis was generally terrible with his Minolta camera analysis of professional swings that we could never hope to emulate.  Both guys had their followings but it was time for them to go.  Immelman will be an improvement–hopefully Nantz will be inspired and sharpen his game.  CBS is way behind NBC in golf coverage with Paul Azinger capably replacing Johnny Miller.  CBS is still way better than Fox –but then anything is better than Fox which should be banned from any golf coverage.