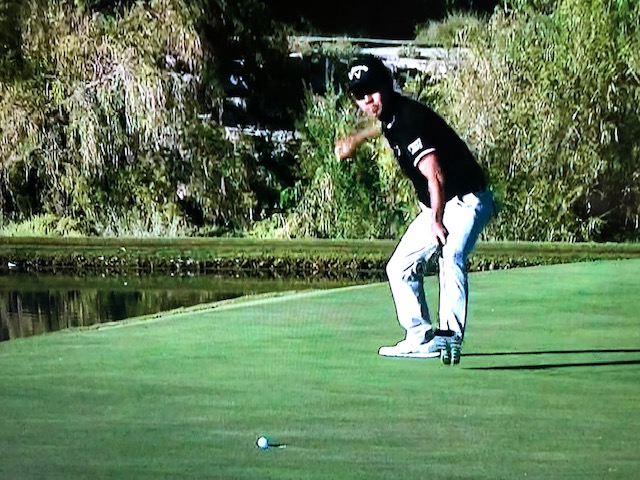 There is no question that Kim overreacted and lost it in the heat of the moment.  He is a leading tour professional in Korea and has played on the US PGA Tour in the past.  He certainly should have been punished for his action and fined etc.  It seems a bit harsh to disqualify him from playing on the Korean PGA Tour for the next three years especially in being assessed a rather paltry sum of $8,350 for the infraction.  Of course, Kim apologized for his action as any professional would and he realized that he lost his composure on a big stage in Korea but…depriving the man to earn a living for the next three years seems a bit harsh.

We have watched Sergio Garcia throw drivers, smash up greens and break putters in two over the last few years and this behavior is also unacceptable but his punishments have been meager compared to what is facing Mr. Kim.  My experience is that Korean reaction to this type of behavior in this regard is not that atypical for Korea.    You simply cannot insult the system and the integrity of sport and get away with it lightly in Korea.  The Korean people are dedicated, hard working and take life rather seriously.  They live daily in the shadow of a divided Korea and face the threat of the North, which is only a few miles away.  It’s a society that functions with dedication to country, tight discipline and respect for people.  Today, the LPGA tour is dominated by Korean professionals and I doubt this type of behavior is even possible from those talented young women.  They seem to know why they are there and how they got there.  Mr. Kim seems to be a victim of circumstance–doing something silly at the wrong place at the wrong time in front of the wrong crowd in the wrong country.   I’m sure he knows that there is no valid excuse for his behavior and he probably knows that he has no choice but to accept this punishment.  He will have to move on and pursue other professional tours to carry on his trade as a professional golfer for the next three years before he can play in a Korean PGA event.  It’s a tough decision for him but it is one that I expect will not be overturned and nor will it be appealable.  A situation like this one would never occur in the US or probably anywhere else.  I’m sure fines and potentially a disqualification could occur but certainly not a multi-year ban.

Kevin Na win the PGA Tournament in Las Vegas this weekend in pretty dramatic fashion.  Na held the lead for most of the tournament and Patrick Cantley and Na went head to head in the final round.  On the 16th hole, Na made a costly bogey after his approach shot found the green side pond.  Cantley took a one-shot lead to the 17th hole and  then decided to hit a 9 iron to the 175 yd., par 3-17th hole probably due to the front pin placement which was only a few yards on to the green.   I know the elevation adds some distance but a 9 iron?  The ball headed right for the hole but took a bounce to the left just short of the green and found the pond. The decision was a curious one.  You have a one shot lead on a rather typical par 3.  The par 5, 18th hole is really a birdie so the competitor is going to have to make two birdies to beat you.  The odds definitely were in Cantley’s favor but he went pin-seeking anyway on the 17th and it cost him.   He managed to get up and down for a bogey.  Na hit a 7 iron rather poorly and ended up in the green side bunker on the right with a downhill lie.  The sand shot would have to be almost perfect to avoid hitting the ball into the left bunker so he decided to play away from the pin to give himself a chance and he executed the bunker shot perfectly.  A great shot with the tournament on the line.  Na then proceeds to hole the 18 ft. putt  for par to tie Cantley.  That sequence was the key to the victory as Na’s putter came through for him time and time again.  It’s unusual for someone to win after the player has relinquished a lead held for most of the tournament.  Cantley came within a whisker of pulling this one out but Na’s putter proved to be the difference.  Pretty good stuff for a non prime-time event… 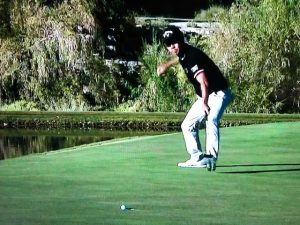 Na holes the critical putt for par on the 17th