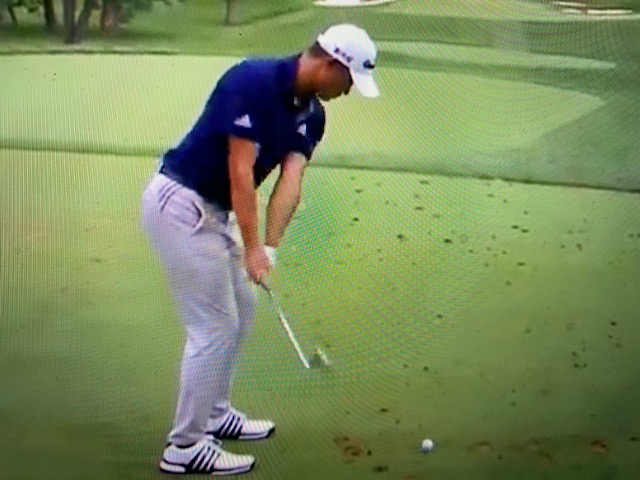 Last week’s PGA event at Jack’s course in Ohio produced an exciting conclusion but it was a very weird event.  Usually tournaments are won through spectacular play or a competitor falters at the end of the event.  In this case, both competitors were alternatively creating great shots and poor shots simultaneously.

Colin Morikawa defeated Justin Thomas in a playoff where either player could have one but  Thomas’ unforced errors opened the door for Morikawa.  It was payback in a sense for Morikawa who lost a playoff in the first PGA post-pandemic event by missing a short putt.

Justin Thomas is an excellent frontrunner who almost never loses the lead once he grabs it.  He took the lead from Colin Morikawa early in the round and had a three shot lead with three holes to play in regulation.  His driver had been erratic all day missing fairways and shoving tee shots to the right.  As he came down the stretch of the final holes, the driver continued to fail as he continued to leak shots to the right falling into bunkers, rough and finally in the playoff, hopelessly behind a tree.  Thomas bogeyed two of the final three holes and missed a very makable putt on the final hole to win the tournament.  Morikawa birdied the 17th hole to get the deficit to one shot and his par on 18 forced the playoff.  On the first playoff hole, Thomas hits another drive to the right but manages a great shot to get on the green some 50 ft. from the hole.  Thomas then holes the putt and you have to believe that it is over with this tremendous and unlikely birdie.  Morikawa had a 23 foot to keep the playoff going and the putt twists into the side of a hole for another unlikely birdie to keep the match going.  There is an adage in match play that states, “don’t ever underestimate what your opponent will do.”  Thomas was incredulous but respectful as Morikawa extended the match.  Luck would run out on Thomas on the third playoff hole.  Another drive to the right and this time the ball is perched behind a tree.  No opportunity to go for the green and could only chip it out of this predicament.  Morikawa drove the ball in the fairway and smoothly knocked an iron on the green 11 feet from the hole.  The magic left Thomas as he could not get up and down for par and Morikawa had two putts to win the tournament and he executed the two putt win.  I’m sure Thomas was very disappointed as he rarely loses a tournament where he has a significant lead.  It was the driver that did him in and it will be very interesting to see his resolve as the next tournament, the Memorial, is on the same golf course.

–Shivas has left New York and thanked Governor Cuomo for his hospitality.  The next stop would be Florida and a visit with Tiger Woods at his home in Isleworth.  Both men are wearing masks and Amazon has drenched Wood’s abode with a series of disinfection products from Clorox.   Tiger wants to meet Shivas and get his advice as to how he is going to play the Memorial this weekend with no fans.  Tiger hasn’t played a round of golf without fans in attendance since he was 6 years old.  The men are almost a perfect match for each other as Shivas has never played a round of golf in his entire life in front of any fans.  Shivas relates his time at Burningbush, “Tigr, the game hapens within thy ears, let the clubs go and feel the wispp of the ind.”  Tiger is a little sheepish and is not necessarily convinced–he is used to fist pumping, foot stomping and tournament victories.  Shivas rejects the Big Mac and Fries and orders an Indian salad at the local McDonalds.  He has decided it’s time to get back to Corona.

Things have taken a turn for the worse at Corona.  The course hasn’t recovered from the thumping it took at the hands of the World Match Play competitors.  It seems that all of the four seasons have descended on Corona at one time as early morning frost and snow gives way to heat and humidity and temperatures that reach 40 degrees C by day’s end. Where is this place?  Corona’s weather is as unpredictable and unknowable as it’s location.  The greens are suffering, the fairways are loaded with some unidentifiable fescue–without Shivas, the place has gone to the gods of the municipal golf courses whose funds have been diverted to the city council’s salaries.  Undaunted Shivas tells the board that the place will be ready for the season’s first tournament whenever that can be scheduled.  “Ay, not to worry, will be ready for the membership in goood time”, Shivas tells the board.  Shivas happily places an order for the Tesla Electric Golfing Tractor to replace all the John Deere equipment.  In addition the board has ordered cutouts of Arnold Palmer, Ben Hogan, Byron Nelson and a host of other notables to serve as a potential gallery for the first member/guest event….stay tuned..

As you head to the back nine, the tenth is a tricky par 3 usually playing 150 yards into a wind that is either in your face or a prevailing left to right wind as the ocean is a few thousand yards in the distance.  A new back tee has been designed at 180 yards that will dramatically increase the difficulty of this hole.  The new tee adjoins the ninth green which is on the immediately left side of the hole.  It’s a great change to what already is a great hole.