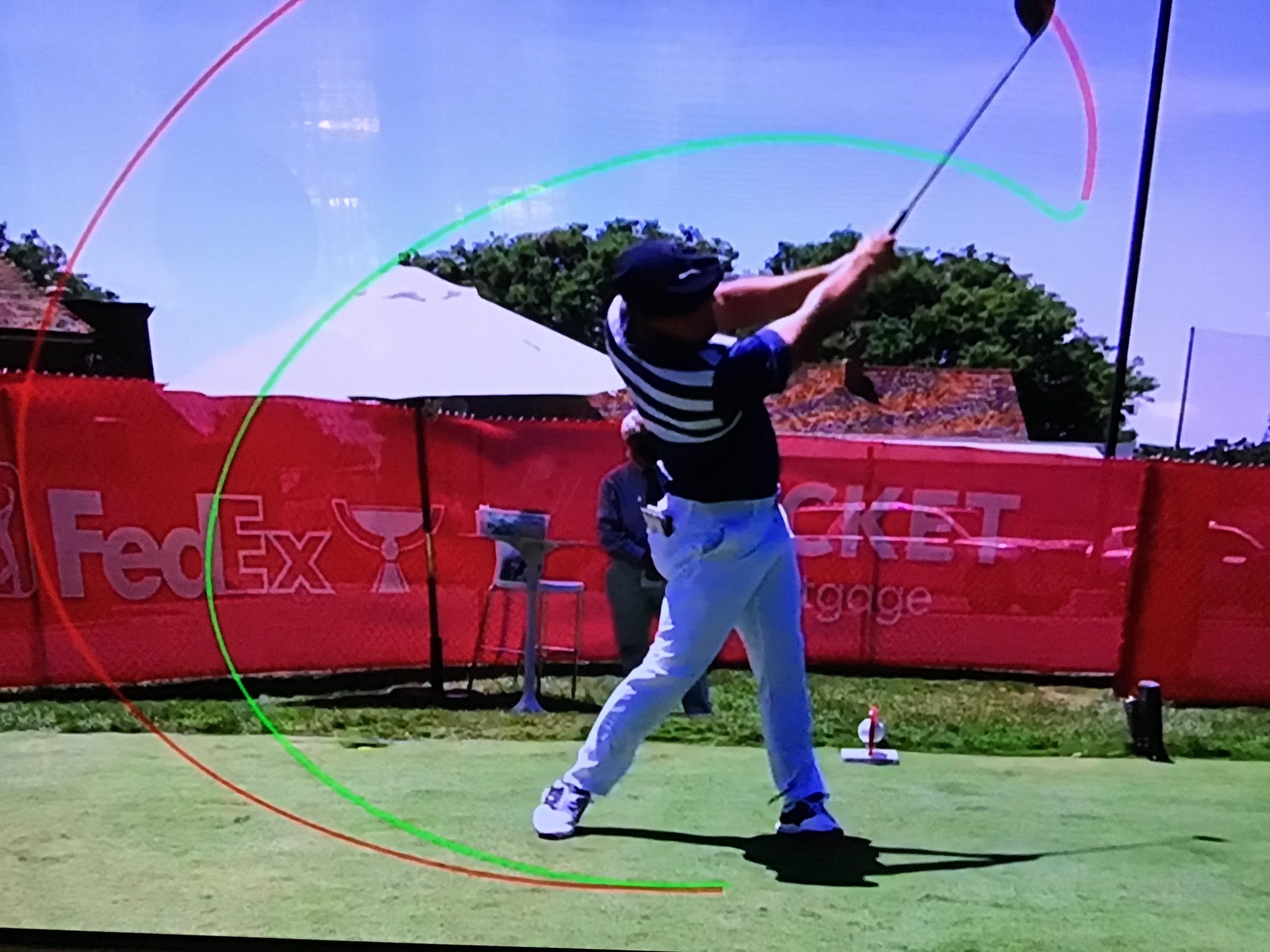 The PGA Tour continued this week at the Rocket Mortgage event in Detroit, Michigan without fans.  The players have seemed to gotten used to the absence of fans and if you judge by the scoring, it seems to be a positive factor.  Through the third round, every participant in the field was under par and these guys are really playing well.  Conditions continue to be ripe for scoring with hot humid days producing softer greens that the players can take direct aim at the pin locations.    The level of play is so good that cut lines have been reduced to 4 or 5 under par to play the final two rounds.  The ball also goes a lot further in hot, warm conditions and this brings us to the story of  Bryson DeChambeau.

While all the other tour players were enduring the pandemic with various rituals of practicing, exercising and family time, DeChambeau decided to become the PGA version of Charles Atlas.  He started a diet and exercise regime that would add 40 pounds of muscle to his six foot one inch frame.  Adding 40 pounds of muscle in a period of 4 months is some serious exercise regime.  His breakfast consisted of a number of eggs, sausages and protein shakes that would clean out any Denny’s Restaurant’s inventory–maybe it could be named the Grand DeSlam Breakfast.  It’s estimated that DeChambeau is consuming 7,000 calories a day without a french fry to be seen.  He is completely focused on increasing driving distance as a tactic to gain significant advantage against the competition.  One of his fellow Tour competitors remarked dryly, “He just has too much time on his hands.  He needs to start getting married and having kids and feel like the rest of us.”  Not right now…DeChambeau is Superman, Batman, and the Green Hornet rolled into one.  Nick Faldo during the TV commentary of the event estimated that DeChambeau’s swing speed was as high as 195 MPH, which is off the swing speed charts.  DeChambeau’s drives during the tournament were routinely more than 350 yards reducing the golf course to drives and wedges.  At the end of the day, despite all the thunderous drives, it took a solid putting performance during the final round to  produce the victory over Matthew Wolff who began the final round with a 3 shot lead.  Wolff edged DeChambeau in another event in July 2019 so DeChambeau has turned the table a year later.  DeChambeau was hot coming into this tournament with 6 straight top 8 finishes and all top 10 finishes since the Tour restarted from the pandemic shutdown.  DeChambeau was an up and coming star anyway prior to his physical transformation this year and is certainly one of the Tour’s leading young stars.  During the shutdown, DeChambeau decided that he is stepping up his game to become the world No. 1 player.  DeChambeau is on a great run but golf success can be fleeting especially when you try to change your approach to the game.  DeChambeau’s focus is admirable and he hasn’t changed his swing mechanics but it might be difficult to sustain this performance in his new physique.  He will have to work on the mental side of being more patient and not become distracted by external factors on the course.  He showed a few lapses during tournament play  especially upon missing some putts and hitting some indifferent wedges to the greens.  In this regard, he would be smart to take a look at some Jack Nicklaus footage who was the best at control and focus of any player I have ever seen.  If this run continues, he will begin to attract nationwide attention as all golfers yearn for a fraction of the power off the tee that he demonstrates.  There are also some drum beats from fellow professional, Brooks Koepka, that perhaps DeChambeau is achieving his transformer with other methods besides Grand DeSlam breakfasts.  Other attempted  transformations in professional golf haven’t been successful.  David DuVal was the world’s No 1 player and seemed invincible.  He decided he needed to bulk up as well to get the extra power off the tee.  His body and golf swing never adapted to his new physique and his career eventually spiraled into oblivion.  Curtis Strange was a consecutive two time US Open winner and nearly won a third when he decided that he needed to increase driver length to compete with a new class of PGA professional who could drive it 275 yards.  It never happened and the sun set on Strange’s career.  Today, a PGA professional won’t survive long on tour if he can only it 275 yards as the average drive is close to 290 yards.  If this trend continues, the professional tees will have to be lengthened to 8,500 yards–instead of the Tournament tees, we can call these tees the BD Tees.

The Spanish Bay Golf Links is a wonderful golf course on the Monterrey Peninsula owned by the Pebble Beach Golf Company.  It seems to be the poor cousin of its famous brethren-Pebble Beach Golf Links and Spyglass Hill inside the famous 17 Mile Drive.  It is a wonderful layout giving the player a variety of shots and different looks for the first 17 holes.  When you get to the 18th hole, you have to wonder what the designer was thinking as the hole is visually horrible.  It is a par 5 of 475 yards that stretches straight away for the first 355 yards leaving a 120 yard or so shot to a green that makes little sense. Imagine an inverted “L”–very unusual in my experience for an approach shot to a par 5 green.  A straight drive down the middle of the fairway will actually yield a difficult second shot as there is rough, scrub, gorse and junk on the left that will have to be carried.  A drive to the left side of the fairway is essentially “jail.”  Drives that land in the fairway should never penalize the player.  The drive has to be as long as possible down the right side of the fairway to have a clear second shot  for the approach shot.  The long driver who hits it 300 yards  will be tempted to go for the green in two and will have to hit it 175-190  yards to approach the green with a lofty middle iron to hold a horizontally large green which will never hold most shots.  The approach shot for the 3rd shot could be as long as 150 yards requiring a shot that has to land on the green since there is nothing but scrub and bunkers to the green.  For most players, the shots won’t hold the green.  It’s a shame that this fine course ends in this fashion.  I realize that the design was impacted by the environmental areas but a finishing hole should be very special and this one…………… 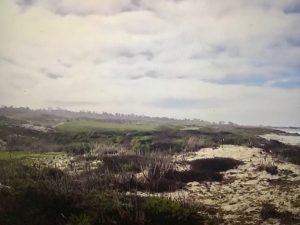 The glorious 17th hole at Spanish Bay (not the 18th)

The Board of Directors met on July virtually by Zoom after recent installation of Verizon’s 5G network  AT&T equipment was removed from the premises after repeated episodes of shoddy performance thoroughly frustrated the board.  The key item on the agenda continued to be the whereabouts of President Shivas Irons who continues to avoid the purview of the Amazon drones that were chartered to pinpoint his location.  The latest tracking information has Shivas at the Mount Rushmore fireworks display but tracers still can’t find him. Revenue for the club is suffering Shivas has a backlog of lessons that need to be scheduled with Warren Buffett and Bill Gates at $1 million/hr.  The drones have transmitted their accumulated data on Shivas into Corona’s X5000 artificial intelligence system and their algorithms predict that Shivas will return to Corona by this time next week as it is believed that he will be a guest of Governor Mario Cuomo at the mansion in Albany, New New York.  The board was updated on its capability to reopen club facilities to the rest of the membership and resume play on the course.  Director Pope Francis predicted that the course would be able to reopen as soon as Shivas returned and it was resolved that the club would extend an invitation to the PGA organizations in the United States and Europe to host the Ryder Cup in September.