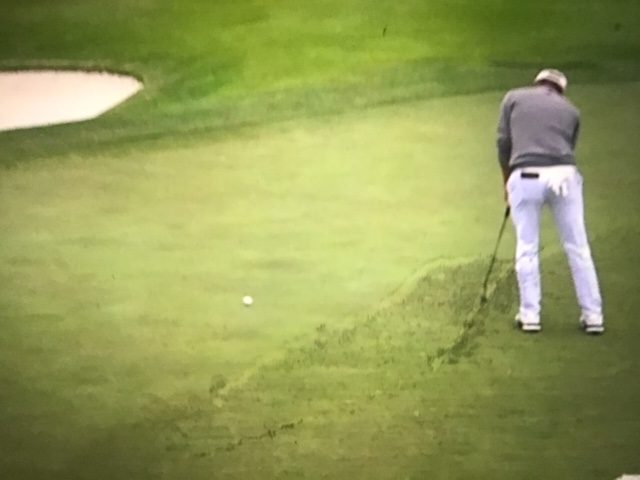 Collin Morikawa won the PGA Championship emerging from a crowded big name leaderboard to shoot 64 and take home the Wanamaker Trophy. The tournament will be forever remembered by Morikawa’s tee shot on the drivable 291 yard par 4. His tee shot was absolutely perfect landing about 7 ft. from the hole where he rolled in the eagle putt to vault into the lead.  Morikawa won this event outright as the entire field played pretty well on the final day but Morikawa’s putter was very reliable as he ranked 1st in putting for the week.  Morikawa’s performance was aided by all the experience he had playing Harding Park during his collegiate career at Cal Berkeley and he made the most of the opportunity.  At  23 years old, he is the newest star on the PGA Tour with 3 tour victories and reminds me how Jordan Speith ascended to the top of the tour.

The first major of the year was contested at Harding Park in San Francisco.  It’s pretty special to have played here many times but it is not the same course that we usually play. We certainly don’t play from 7400 yards and some of the holes have been stretched out significantly that provided a stern test to the professionals.  I’m writing this blog from my Pebble Beach home and can relate to the weather conditions that the professionals experienced  The mornings are cool but the winds are benign.  The fairways do not run and jump like most venues on the PGA tour and the greens are receptive to the professionals lofty medium irons to the green.  The afternoon rounds are in a different story as the fog begins to roll in about 3PM, the wind picks up a bit and the greens start to dry out making putting a different game.  It’s all the same for the first two days of the event as those professionals that play their first round in the morning will play their second round in the afternoon.  Tiger Woods was in that situation and on day 1, he took only 28 putts and made 119 ft. of putts for 2 under par.  On day 2, playing in the afternoon, he only holed 49 ft. of putts and shot 1 over par.   ESPN and partner CBS provided outstanding television coverage of the event with over 14 hours of broadcasting  in the first two days with an outstanding team of commentators.  Scott Van Pelt was  the ESPN emcee and did a fantastic job of providing insights with the former professionals on the broadcast.  Van Pelt is a veteran who really got his start in major broadcasting with the Golf Channel.  The broadcast was even complementary to the usual droning of the CBS cast of Jim Nantz and his crew as they seem to be positively effected by the pace and conversational quality of the ESPN crew.

Brian Dunn shot 5 under, Jason Day surged to 5 under, the leader board was packed with big names and was all bunched.  There was the Dream pairing of Woods, McIlroy and Justin Thomas.  Contestants played off both nines and holes 8 and 9  punished the field.  The 8th hole is a par 3 of 230 yards and can be and probably could have been lengthened on the weekend to over 250 yards.  The pin is very difficult to attack and there is a price to pay for missing the green with thick spongy rough.  Less than 25% of the players were hitting this green in regulation.  The 9th hole is a par 4 of 520 yards and even a 300 yard plus drive is leaving the professional with at least 200 yards to the green.   Many of the professionals cannot get past the bunkers that are strategically placed about the 285 yard mark and bogeys and other were recorded as the hole is played as the most difficult hole on the course.

Bryson DeChampeau continued to provide entertainment and color to every event he has played on tour this year and this event was  no exception.  He was powering the ball over 300 yards to the point where his shaft gave out on the 5th hole and simply fell apart.  The rules of golf allow for the shaft to be replaced or a new club introduced into the bag when the club breaks through no fault of the participant.  If the player abuses the club such as slamming it on the green or smacking it against a tree and it breaks, the player cannot replace the club.  In this case DeChampeau has literally beat the club to death with his 200 mph clubhead speed.  He quipped, “I’m surprised it lasted this long,” and cheerfully replaced the club.  For most players, a broken club in the middle of a competition can be very disconcerting but DeChampeau pulled a Roy Hobbs and continued as if nothing had happened.  Roy Hobbs, played in the movie……by Robert Redford, smashes the game winning homer in the National League playoff game after breaking his special bat after hitting a foul home run to win the pennant.  DeChampeau is a swashbuckler whose newfound strength and body managed a few under par.  When asked about his meal for the evening, he said that it would have to be steak and potatoes to keep his juices flowing and his calorie count high.

Emergence of newcomers ran up the leader to join the big names.  The biggest surprise was Haotong Li-a 25 year old from China (lives in Florida)  grabbed  the lead in the morning round to go -8 for the tournament while hitting only 50% of the fairways. shooting 65.   Another surprise is the 111th player in the world-Mike Lorenzo Vera from France,  who striped the ball consistently into the fairways.  On the treacherous 9th hole, he airmailed the green into the field of spinach and double bogey looked like the end of his day but after an indifferent chip back to the green, he holed a very difficult 10 ft. putt to post an unlikely bogey and close the day -6 two shots back. The Woods group of Tiger, McIlroy an Thomas struggled and all faced missing the cut but managed to squeeze through and would  play the weekend eventually as also-rans and never contended.    The 9th hole proved damaging to Joel Dahmen who came to the hole at 6 under and managed a triple bogey with a series of mishaps to finish at -3.  Dahmen will think about this hole for a while as his final round 67 earned him a 10th place finish.  Tommy Fleetwood.had a spectacular rounds of 64 but continued to struggle in the final rounds of majors and finished 29th in the field for the tournament.

Li is the final group but lost the lead-on the back nine.  A wayward drive on the 12th hole  hits a tree and the gods of golf offer a “mulligan” as the ball ricochets back into the fairway where he would make an unexpected birdie.  His luck ran out on the 13th where another wayward driver and he started to fall back.

Dustin Johnson’s putter ignites and vaults him into the lead at -9–Koepka lurking at -7 and 11 players are at -6 including one Bryson DeChampeau.  Koepka liked his chances and was very confident commenting that competition did not have a great record winning majors compared to his achievements.  The golf gods frowned….

DeChampeau once again made the highlight reel holing a 95 foot putt on the 17th hole for a birdie to his dismay and good fortune and skill.  DeChampeau is also at -6 and is pretty excited about the final round.  He has his emotions in check and he would be a factor in the final round.

Woods, who barely made the cut, continued his putting woes and could not post a round that would put him into contention.

The final round was staged for a dogfight with Johnson in the lead with a dozen players well within the realm of possibility of victory. 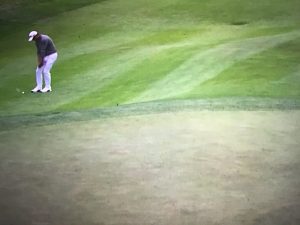 Critical chip on the back nine for another birdie

On Sunday, the winds were down making the greens more receptive so this would turn out to be the best scoring day of the week. The lights went out for defending champion, Brooks Koepka, who simply had a bad day at the office.  Too many fairways missed and indifferent putting led to an over par round and he dropped out of contention.  It seemed that the gods of golf were not happy at Koepka’s unbridled optimism to emerge from the pack on the final day.  Koepka’s over par round was a disappointment for him as he had put himself in a good position.  He handled this situation well and with class…he will be back.

Tiger Woods had a good day shooting 68 and finishing the tournament under par at 2 under.  His ball striking and putting on Sunday were his best showing this week and gives him the encouragement needed to prepare for the next Major.

Morikawa’s day started indifferently and he had to hole a putt of nearly 10 feet to make par.  The first hole was playing pretty easy on Sunday as a number of the leaders made birdie here and it was almost like losing a shot to the field.  I believe that putt was an omen to the type of day that Morikawa would have.  He played flawlessly and made more putts throughout the day that pulled him into contention as the field could not pull away.  The drive on the par 4, 16th day will go down as one of the greatest shots of all time in tournament golf coupled with a bogey free round of 64 made him one of the youngest players ever to win a major.