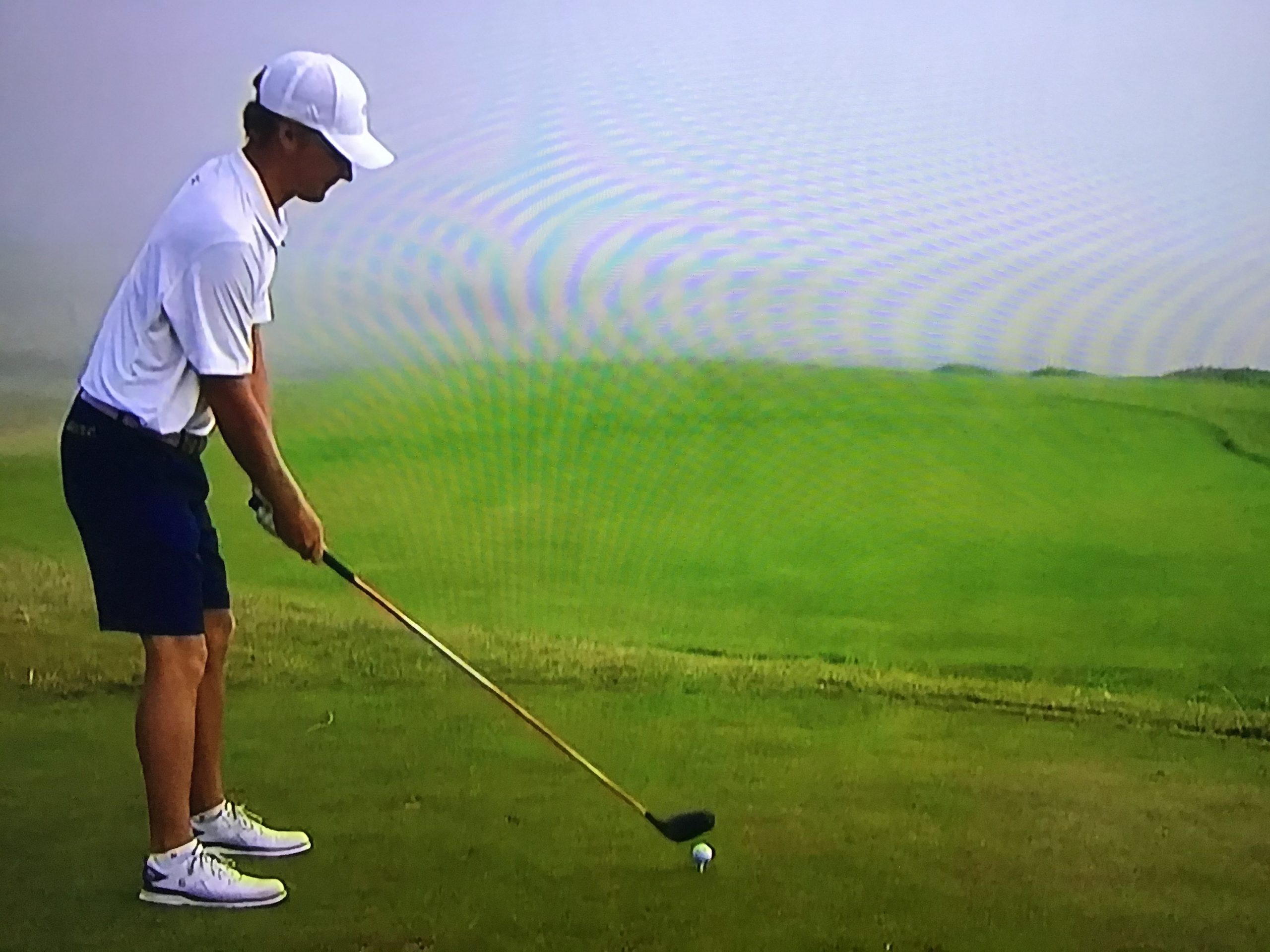 The US Amateur USGA Championship was held at the Bandon Dunes course at Bandon Dunes, Oregon.  In the round of 16 match play event, a tragic event occurred on the final hole of the final match of the day.  The match between Segundo Oliva Pinto and Tyler Strafaci was all even coming into the last hole of the par 5th 18th hole.  Pinto’s approach shot to the green landed in the first green side bunker.  The sand in the Bandon Dunes is pretty consistent with what you would experience in links golf in England, Ireland or Scotland.  It’s distinctly a rich brown color and fluffy.  Bunker shots are not that difficult since the sand is usually very consistent and you can use the bounce of the club to extricate the ball toward the hole.  The ball was sitting up nicely in the bunker but the winds of the day had removed some sand from the bunker and while the ball was teedup, the lie looked a little skinny.  The match was going to come down to whether Pinto would be able to get up and down from this bunker and force a playoff.  He was surveying the situation as to where to land the ball on the green and get close.  He was “lost in thought” of this important shot and his approach was not unlike any other competitor in this situation.  Then, for no apparent reason or any prompting from Pinto, his caddy jumps into the bunker and starts to touch the sand with his hands.  His position in the bunker was nowhere near the ball but that wasn’t the problem, he was, in effect, testing the sand.  Pinto had no knowledge and nor did he see what the caddy was doing.  The Rules of Golf are pretty clear on this point so we’ll cite Rule 12.2 (b):

-Restrictions on Touching Sand in a Bunker

Before making a stroke at your ball in a bunker, you must not:  deliberately touch sand in the bunker with your hand, a club or rake or any other object to test the condition of the sand and learn information for your next stroke.  This rule applies to both player and caddy.  The penalty for a violation of this rule in match play is “loss of hole.”

Strafaci’s father is his caddy and he clearly saw what Pinto’s caddy had done and summoned a rules official and the investigation began.  Strafaci noted that he had seen the caddy go into the bunker but did not see whether he had touched the sand.  TV replays clearly displayed that the caddy had indeed tested the sand.  He denied touching the sand but the TV replay was indisputable.  The match was over and Pinto never got to hit that bunker shot.

It was an amazing to lose a match especially in the round of 16 in the United States Amateur Championship.  Strafaci was almost as upset as Pinto.  He didn’t want to win this hard fought match in this manner and he was clearly emotionally drained when interviewed about the incident and his unlikely path to victory.  Pinto was pretty philosophical about the outcome.  He had no control over what happened and it was very clear what happened and the penalty for the result was very clear.  It was all very logical but he was going home never knowing how far he may have been able to go in this tournament.  He did not react emotionally and actually forgave the caddy for his incredible mistake.  In all my years of playing competitive golf, I never had a caddy that even went near a bunker that I was in.  The biggest problem that comes from this rule is that sometimes a competitor might touch the rake and I’ve seen the penalty called by the competitor.  Pinto’s reaction to this tragedy was incredibly mature and a gracious gesture.  The caddy was a local caddy but I’m sure He’ll have to shave his beard and look for work elsewhere especially in tournament competitions.  Golfers, particularly fellow caddies,  have long memories and this one won’t be forgotten anytime soon. 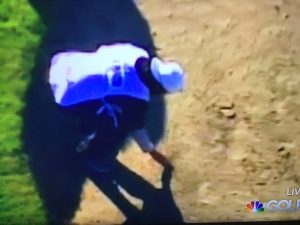 Strafaci went on to win his next match and overcame the emotions of this experience but he had to win to the 18th hole again after losing a 4UP lead in the match.

Strafaci Wins the US Amateur

Strafaci’s adventures in the tournament continued.  The next day he squeaked out another victory on the 18th with a closing birdie.  In the semi-final, he was paired against Oklahoma State Cowboy, Aman Gupta who showed tremendous grit and determination in taking the match to the 18th hole.  Strafaci had squandered a good lead and seemed tentative with his putting and Gupta closed the gap and had the match at even on the 17th hole.  Gupta’s drive on the 18th hole unfortunately found the pot bunker in the middle of the fairway while Strafaci had strafed his drive into the left rough.  Gupta had previously created this opportunity with a terrific bunker shot on the 16th hole, which was a tremendous shot under pressure.  Gupta took a mighty cut out of the bunker and left it in the bunker, after another desperate try which was pounded into the top of the bunker, Gupta had to concede and Strafaci won yet another match on the 18th hole.

The final match pitted Strafaci against Ollie Osborne from SMU.  Osborne had been cruising most of the week and took a 5 UP lead at one point in the first 18 holes of the match after birdies on the first three holes.  Strafaci gradually fought back and played consistently good golf and ended up grabbing the lead on the back nine of the final 18 holes.  The match was extremely close as both players created some magic halving holes after monstrous drives by Osborne and putts by Strafaci.  The momentum seemed to change on the 10th hole when Strafaci missed a two footer to win the hole after a tantalizing chip shot.  The match seesawed but Strafaci’s 2 UP lead disappeared as he imploded on the 16th and 17th holes bringing the match to All Square.    Once again the match might be decided on the 18th hole or go into extra holes.  Osborne hit another monstrous drive as the fog on the 18th tee dissipated enough where you could actually see the ball in the middle of the fairway.  Strafaci hit a tremendous drive and found himself about 15 yards behind Osborne.  Strafaci then hit the shot of his life–a tremendous 4 iron from 230 yards that found the green and gave him a 10 foot putt for eagle.  Osborne couldn’t match the shot as had a delicate pitch from about 30 yards.  Strafaci missed the eagle putt but had a tap in for birdie.  Osborne was unable to get up and down from his position and the match was over.  Strafaci claimed the title winning his fourth consecutive match on the 18th hole.

The gods of golf were smiling and admiring the finish.  The match was one of the greatest final matches ever played in the history of the competition.  Strafaci’s grandfather, Frank Strafaci, Sr., who had died in 1988 before Tyler was born had set the standard for golf in the family.  Frank has his name on the 1935 US Amateur Public Links Championship and therefore there are now 2 Strafaci’s with their names on a USGA championship cup.  Frank had competed for the US Amateur 16 times but never made it to the final match.  Son, Frank Strafaci, Jr. now 62, caddied the entire week for Tyler and is also an accomplished amateur golfer with 3 appearances at the US Amateur.  Frank, Sr.’s claim to fame was taking Arnold Palmer to the 18th hole in the US Amateur in 1954, which Palmer won at the Country Club in Detroit.

The combination of Tyler’s adventures at this event culminated in one of the greatest shots in US Amateur history-the 4 iron from 230 yards will forever be remember in the Strafaci family and the history of Georgia Tech golf annals. 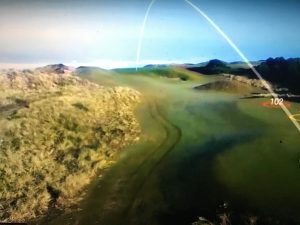 The closing holes at Bandon Dunes provided a great deal of the extraordinary drama from the tournament.  The 15th hole at Bandon Dunes is a nasty par 3 that played at 160 yards and also at a tee box of 190 yards.  Club selection for these talented amateurs was critical since the consequences of missing the green are real and dire especially in the wind.  The prevailing wind blows left to right, which forces the player to go left as any miss to the right with result in either a tough uphill bunker shot or a very difficult uphill pitch to the green over that bunker.  Going flag hunting on this hole is a perilous endeavor.  Any ball that goes past the ball can roll off the back of the green and end up in the penalty area without a shot.  Even if the ball is found, the player’s uphill approach to the green can be miscalculated and the ball rolls down the hill again.  There was considerable carnage on this hole and some matches had scores of double bogey or worse.

The 16th hole is a delectable par 4 of 319 yards that can be driven by all of the competitors.  Any drive to the green has to be accurate since the fairway has a lot of leeway to the left but a treacherous bunker guards the green.  Any shot missed to the right is a goner into the rough and the gorse surrounding the hole.  The hole sits on the precipice of some cliffs at oceanside adding to the drama of the competition.  During the final match, the fog rolled in adding geometric degrees of difficulty to the tee shot. 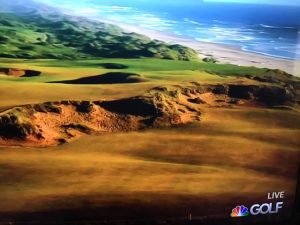 The 17th hole was another pivotal hole in the tournament as a prevailing wind blowing left to the right can take a well struck tee shot and have it finish just inside the penalty area which is a huge cliff on the right side of the hole.  Playing from this position isn’t easy as the green is extremely large and a shot that lands on the right side of the green could carry the green and end up in the penalty area.  This predicament happened to a number of players resulting in some big numbers and lost golf balls. 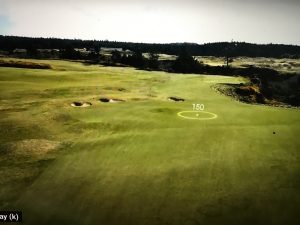 The USGA has to be pleased putting the event here at Bandon.  Only Bandon Dunes and Bandon Trails were utilized for the entire event and the courses provided a great test for the best amateurs in the world.

← PGA Championship Patience and Persistence: A Victory at the Women's British Open →