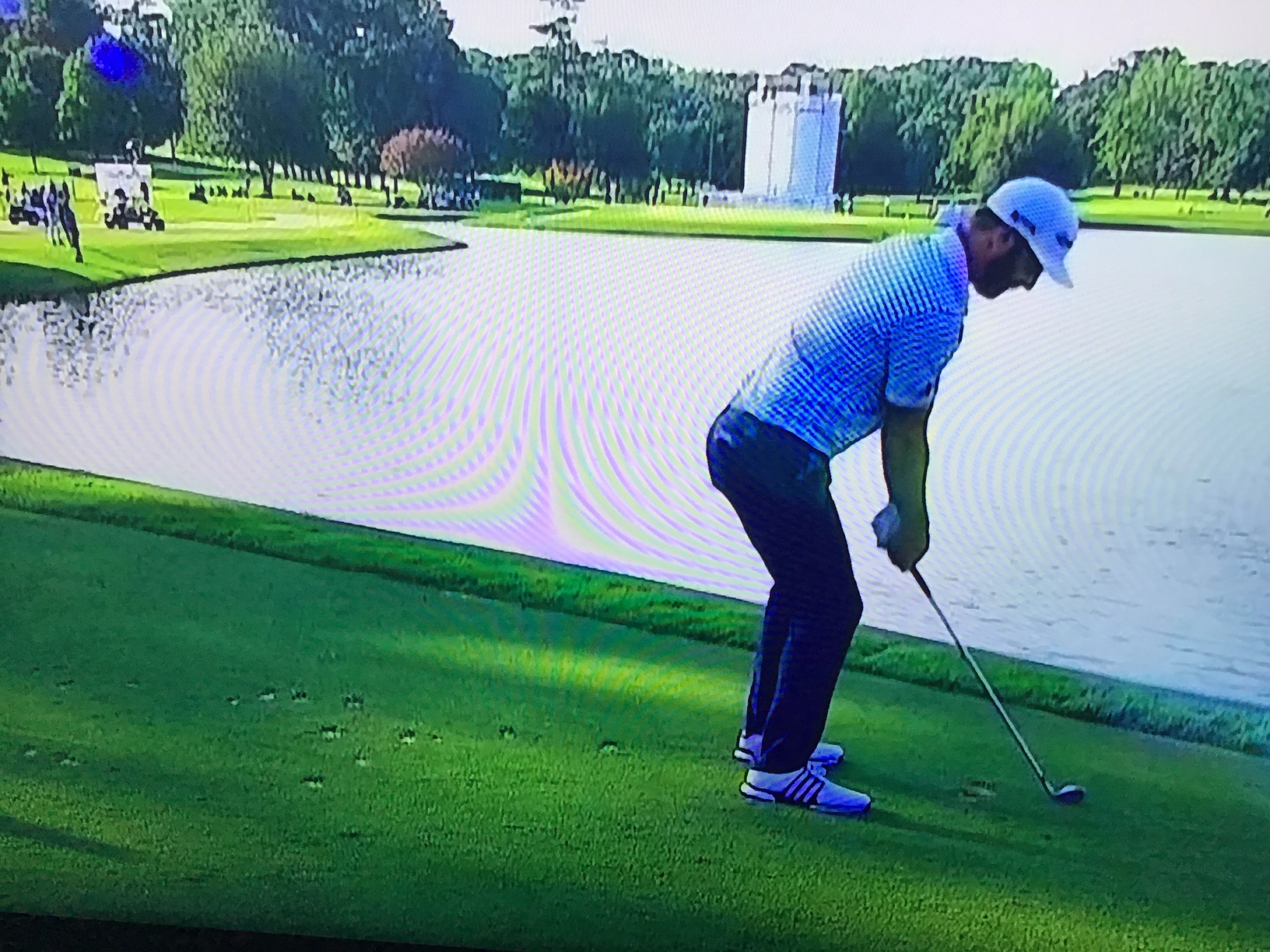 Dustin Johnson won the Fed Ex Cup capping a very successful season.  Johnson demonstrated that you really have to pay attention to your game at this level.  As the incoming medalist to the event at East Lake in Atlanta starting the tournamentwith a two stroke lead over the field, he struggled in the second round but clung to a narrow lead against the best competitors on tour.  Johnson would be tempting real trouble by missing fairways as the spongy, wispy East Lake rough was extremely unpredictable.  Johnson’s coaches felt he was standing too far away from the ball and made some adjustments in his stance and get him closer to the ball after the second round.    When you hit tee shots over 300 yards, a small error can produce very erratic results as Johnson only hit 2 fairways in the second round.  The tip was spot on as Johnson regained control over the driver and a hot putter vaulted him into a five shot lead going into the final round. A five shot lead would be tough to overcome but the competition would step up and make it interesting.  Johnson had some kinks in the armor as he bogeyed the 7th and 8th hole and faced a 8 foot par putt  on No. 9.  After another tremendous drive on 13, he missed the green with an indifferent short iron but still had a relatively easy pitch shot to the green.  Playing partner, Xander Schaufflele had driven into the rough and missed the green as well.  Johnson watched as Schauflele  hit a poor pitch shot and would have a long putt for par.  Golf is a strange game even at the professional level as Johnson followed Schaufflele with a very poor pitch shot,  almost chunking the pitch and had a 20 footer left for par.  If Schaufflele  made his putt and Johnson missed, the lead would shrink to 2 shots with 5 holes to play.  The mental pain of making a bogey after a terrific 300 yard drive in the fairway might have been unsettling, but he rammed in the putt for a par to stop the skid and the tournament was essentially over at that point.  Schaufflele missed his putt and made bogey and he would no longer threaten Johnson’s eventual march to victory.  Johnson punctuated the win with a brilliant bunker shot on 18 and holed a eight foot for birdie.

Johnson’s victory was the closing act of a shortened but very entertaining PGA season.  It might be the end of the season but two majors will be played in the next few months.  The US Open will be played at the iconic Winged Foot Country Club in Mamaroneck, New York in two weeks followed by the Masters in November.  It’s quite a weird time even for golf as the pandemic rolls on.  The Tour’s first official event commences next week in fire-raged California in Napa County.  It’s a shame as the event is likely to be skipped by the big names on tour following last week’s event.

It seems that there is an elite class is emerging from what is a very competitive PGA Tour.  I would classify the new elite class as Johnson, Justin Thomas and Jon Rahm.  Thomas is a terrific talent and has the capability and consistent performance to compete effectively.  Almost all the players on tour these days have to hit the ball 300 yards to be competitive.  I would also add Rory McIlroy to this class but his performance has been a bit inconsistent but the raw talent is there to be No. 1 in the world again.  Jon Rahm is just a tremendous talent.  I can’t figure out his golf swing as he gets tremendous power and swing speed from his hip turn as the club doesn’t seem to go very far back in his swing but the swing speed of 144 mph makes him one of the longest hitters on tour.  I looked at his Golf Digest lesson feature this month and couldn’t figure it out.  Rahm produces excitement and some of it is unintended.  The 66 foot putt on first playoff hole against Johnson at the BMW Fed Ex event produced a remarkable victory.  Rahm’s emotions can run hot on the course and during the BMW, he picked up his ball on the green forgetting to mark it and incurred a needless one shot penalty.  He handles these matters maturely and takes full responsibility for his actions.  Brooks Koepka can also qualify for this  group and has the skill to return to it as a multiple major champion assuming he can recover from a series of maladies that impacted his performance this year.  It will allow be interesting as to how he handles the comeback and he seemed to advance an air of confidence that the gods of golf simply won’t tolerate. 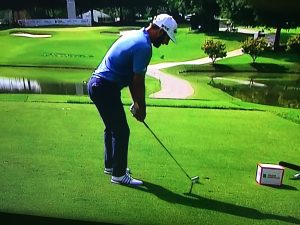 Johnson at the par 3-9th

The next group in my view are the swashbucklers and up and comers.  This is a small group consisting of Bryson DeChampeau and Colin Morikawa.  DeChampeau is a breath of fresh air for the game exuding confidence without being arrogant.  His tumultous drives of 350 yards+ are turning his game into driver/wedge (the only question is which wedge).  His short game of wedge, chip and putt will determine his ultimate success and I think he should prevail.  It will be very interesting to see how he performs at the upcoming US Open at Winged Foot.  Morikawa has a sweet swing and he is oozing with confidence so consistency will be important in the coming year.  He could be a factor in these last two majors.  His bunker shot on the first hole of the final round was holed from a fried egg lie 47 ft. from the hole.  It was the best bunker shot that I’ve ever seen in a PGA event and perhaps one of the best ever. 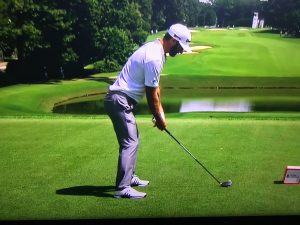 Johnson teeing off at the tough 1st hole at East Lake 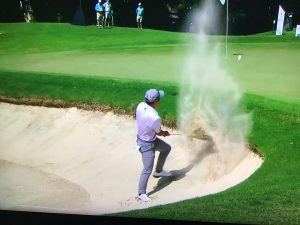 The last group with significant potential are the guys that have significant skills but haven’t completed the final test yet.  I would put Tony Finau and Victor Hovland in this class.  Finau has had a number of chances but you can’t make any unforced errors at this level as he has played his way out of certain events.   Hovland , former USGA amateur champion, has played well all year  and will break through in the near future.

The game is a pleasure to watch on television.  I can understand that the players miss the fans and the excitement but we are watching the best players in the world in a very quiet environment and they are producing great golf.  Their errant shots are no longer are protected by galleries and there are no camera snaps, bad behavior and “it’s in the hole” going on.  The elimination of Fox for golf coverage is a godsend and it’s getting to the point that I wish CBS abandoned ship. (Nantz is way overrated but still palatable). Commentators such as Dan Hicks (better than Nantz), David Feherty, Justin Leonard, Roger Maltbie, Gary Koch and now complemented by Mickelsen’s former caddie Bones MacKay bring the insights without hyperbole.  Looking forward to the US Open.

← Patience and Persistence: A Victory at the Women's British Open US Open Preview →