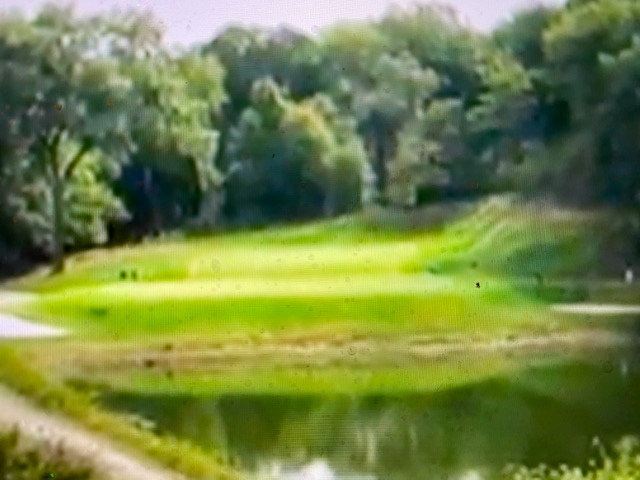 We lived about a mile away from the main Yale university campus in New Haven, Connecticut in the Wooster Square area populated by New Haven’s Italian community and home to some of the pizza restaurants in the entire world.  You simply have to ask any Yale graduate to comment on Pepe’s Pizza and I’m sure you’ll get a big excited smile.  As an inner city kid, I spent most of my entire athletic career on the basketball court in the streets of New Haven.  My main contact with Yale University was being employed on a Saturday afternoon as a rope guard at Yale Bowl football games to prevent fans from moving into premium seats.    I played some high school and collegiate basketball at Payne Whitney gymnasium and won the State free throw championship in 1965 there as a high school junior.  What does this have to do with golf?  Absolutely nothing, I never held a golf club in my hand until 1973 and it wasn’t a pretty sight.  I couldn’t tell you where Yale University Golf Course was and had no idea of its existence.   I thought it might be a few miles from Yale Bowl tucked away in the outskirts of the Westville area of New Haven.  This was the high income area of New Haven and my only experiences there were CYO (Catholic Youth Organization) basketball at St. Aedan’s Church when I was in grammar school.  Ten years later, I would have my first experience as a 13 handicapper at the Yale Course.  When I played the 9th hole at Yale for the first time, I was completely intimidated as my skill level at that time only focused on survival not par or excellence of any kind.  Today with all the experience that I’ve had playing golf all over the world, intimidation is a word out of my vocabulary–I still need to pay attention and focus on my mechanics but I can now relate Yale’s Ninth to my memory encyclopedia of golf hole with some success.

The ninth at Yale Golf Club is a wonderful hole and highly differentiated from most designs but there are some similarities to some other well designed holes.  The course was designed by the renowned architect C.B. Macdonald with assistance from Seth Raynor.  The 9th is Yale’s signature hole as a par 3 that plays from 190 to 230 yards.  The green is 65 yards deep with a five foot depression.  The hole is actually the product of Macdonald and Raynor’s design concept of the “Biarritz green.”  The Biarritz Green design was conceived by Macdonald and Raynor as they built courses in Europe and the United Kingdom and was only applied to Par 3 holes.  Other designers have taken the concept further and adapted it to par 4’s and par 5’s.   The Biarritz Green has the following features:

–the green is massive stretching from 60-90 yards

–there is a swale in he middle of the green that is anywhere from 3-5 ft. deep

Other examples of Biarritz Green concepts are the 18th hole at the Old Course at St. Andrews with its Valley of Sin.  I would also add the 16th hole at Pasatiempo (which is a par 4) with its huge green and triple tier green with swales that are at least 2 feet.  Pasatiempo is a MacKenzie course but the concept seems to be similar.  The philosophy of the designers was that the player would be tested to hit a long accurate shot that would have to hit the green and avoid the swale with the pin in the front or have enough speed for the ball to roll through the swale to the back pin.

The back pin at Yale’s 9th measures the hole at 230 yards.  To get to that back pin, the tee shot has to carry the lake (175 yards) and has to have enough juice to roll through the swale to the back pin.  There’s nothing worse than hitting a great tee shot here that carries the lake but ends up in the swale in the middle of the green.  Putting out of the swale is at best a roll of the dice.  Four putts out of the swale are a definite and unpleasant possibility.  Any tee shot that finds the bunker requires precision since any bunker shot could end up in the swale with all the attendant consequences.  It’s a great hole that requires an excellent tee shot to a particular spot on the green.  The swale has to be avoided.  I believe that putting out of the Biarritz swale is  tougher than the Valley of Sin at the Old Course.

Fast forward to the situation today at Yale.  The pandemic has had a considerable negative impact on the finances of colleges and universities even those with a $30 billion endowment like Yale.  It does seem to me that Yale Golf is not a significant priority even if it is one of the best designed courses in the United States.  The course has been neglected financially and actually had to close for a bit to the vast disappointment of the community.  The situation is currently better and “on the mend” but the 9th hole is closed as the dam that supports the lake is being repaired and renovated.  It’s a sad looking place at the current time but the healing is beginning to take shape.  It’s been a few years since I played Yale and I’m glad I made it especially given the current environment. 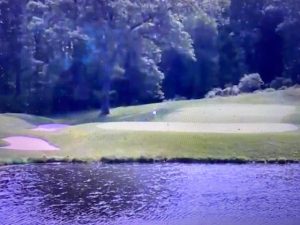 View from the tee with pin in the front 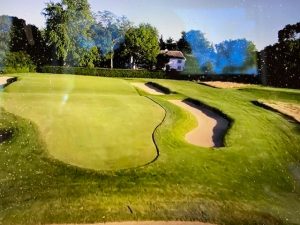 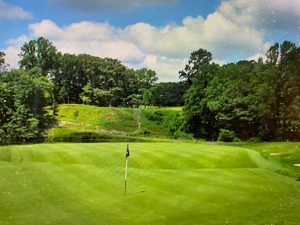 View with pin in the back of the green 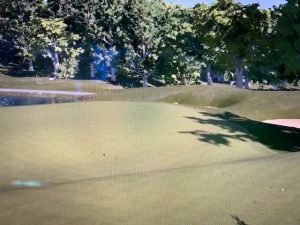