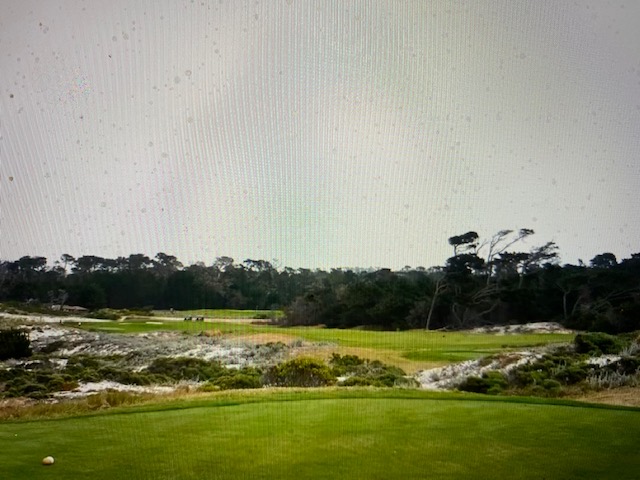 The Spyglass Hill Golf course is a favorite and very difficult test nestled in the pines of the Monterrey Peninsula.  The Course is owned and operated by the Pebble Beach Company and hosts a number of tournaments and championships of the Northern California Golf Association.  It is also in the rota for the AT&T Pebble Beach Pro-Am, which is a marquee PGA Tour event every February.  Many players prefer Spyglass to the Pebble Beach golf links.  I find the comparison difficult since the courses are pretty different but I would submit that Spyglass is the harder of the two venues. 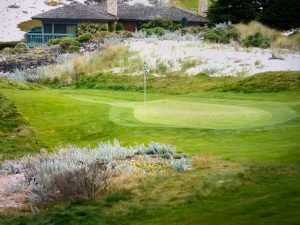 Good view of the front of the green-pretty narrow

Spyglass Hill is famous or infamous depending on your point of view for the first four holes.  The first four holes are a real grind and if you didn’t bring at least your B game, your scorecard could look pretty ugly.  The fourth is a short par of no more than 350 yards as a dog leg left.  The hole was sculpted out of the dunes and is the closest hole to the Pacific Ocean but the ocean is only in view and is not in play.  There is a carry from the tee of only 175 yards to the fairway.  There are many options as to how to play this hole (perhaps too many options) and the player has to really think about how to approach the green.  If you want to cut off the fairway in order to get a shorter approach to the green, you will have to carry the sand dunes that extend from the tee box all the way to the fairway.  You really cannot hit a driver here as the carry to the fairway will be between 175-215 yards.  Trouble begins if you drive the ball through the fairway into the rough or if you miss the fairway left or left center and find the sand dunes.  You can add at least one shot out of the dunes back to the fairway since the sand is basically beach sand and advancing the ball with any distance will be challenging.  What makes the hole difficult is the approach shot to the green since the fairway narrows significantly to what seems 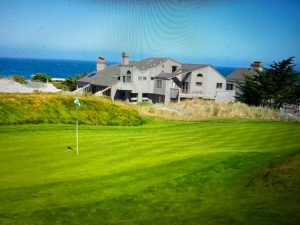 View of the green-can’t even see the back bunker

like no more than ten yards.  The dunes find their way all the way up to the hole on the left and the right is shaped with mounds and a bunker that are actually above the ball.  A shot into the right green side bunker is actually better than trying to chip out the gnarly fescue.   The green is pretty diabolical with two tiers and it seems that the grain on the green moves the ball north toward the back of the green.  A well struck iron shot into the green could find the front of the green and end up in the back of the green with a forward roll.  The green is very narrow but also very long (probably 20-25 yards).  For good measure, there is a bunker at the back of the green on the left, which really shouldn’t come into play unless the pin location is at the back of the green.  The hole has all the ingredients of making birdies (for two well executed shots) and the dreaded “other.”  Its been over 20 years ago but I vividly remember the 12 I made on this hole.  Twenty years ago, the hole had ice plants all along the right side of the hole.  If you drove the ball through the fairway off the tee, you would end up in the ice plant.  When a ball ends up in the ice plant, it looks like a fairly simple shot to execute and get back into play.    There is considerable evidence and experiences of many players that would say that this isn’t the case.  I drove the ball through the fairway and ended up in the iceplant.  The ball was sitting up nicely in the iceplant so I decided to take a 7 iron and advance the ball into the fairway and set up for a short shot to the green.  I took my stance and proceeded to take the shot and the ball moved about an inch.  I was incredulous–how could this be and proceeded with another thwack and the ball moved another inch.  I was beginning to “lose it” and took another whack at it and the ball finally moved from the plant but only about a foot.  From that position, I was finally free and had 75 yards to the green for my sixth shot.  I hit a half-wedge nice and high and landed on the green but found the bottom tier and rolled into the back bunker.  I couldn’t believe it!  For my 7th shot, I thought I hit a very nice bunker shot, which flew out of the bunker onto the green, catching the top tier of the green and yes, rolled back into the bunker.  I knocked the next one haphazardly out of the bunker on to the green–laying 9 and completely exasperated-I three putted from 8 feet for a sweet 12.  The ice plants were removed a few years later but I had nothing to do with it and I never understood why they were removed but I certainly wasn’t unhappy about it.  Since then, I haven’t had too much trouble with this hole but after making birdie on the hole,  you want to walk off the course and celebrate that achievement. 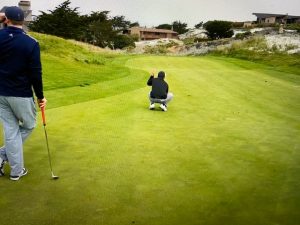 View of the length of the green and tiering

The fourth hole at Spyglass is another great designed hole that plays difficult despite the short length of the hole.  It has to rank among the great par 4 short holes that requires precision in all aspects of the game.