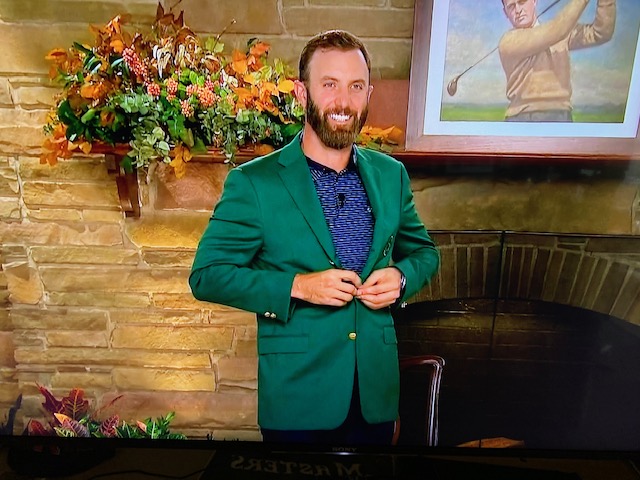 Unfortunately, Augusta National was defenseless for the November 2020 Masters.  The course was in its usual immaculate condition but the swirling mysterious winds that can drug the professional were not present.  Significant rain descended on Augusta on Wednesday through the night and therefore removed Augusta’s line of defense with its lightening fast greens.  The players could fire at the pin positions without worrying about strange bounces and breaks.  Augusta National is never “tricked up”–the course is there for the taking as the player is beset with a variety of options where the course invites you to play to get into the right position to attack the pins.    You’ll have to play well to make birdies and rise up the leaderboard but its a fair, interesting variety of holes.  If the winds blow and the greens dry out, scores will rise but otherwise the course is ripe for the modern player who can drive it past all the bunkers.  Augusta National chooses not to try to deal with the modern power game by placing additional bunkers or hazards and requires the players to get their shots into the fairways and avoid the pine straw.  Without  the patrons, some errant shots might still offer the potential of recovery.

Dustin Johnson won the 2020 Masters in convincing fashion and set a new mark for scoring at 20 under par  Johnson came into the tournament in good form with a second place finish at the Shell Houston Open.  The keys to winning the Masters was to drive the ball in the fairway, putt well and take what the course is willing to give up.  There were plenty of players that could stripe the ball 300 yards plus but accuracy and consistency would be critical.  Augusta National does not have the penal rough of a US Open but it’s important to drive the ball to the correct spots.   Johnson, still the Number 1 player in the world,  lurked in the media background while Bryson DeChambeau grabbed the spotlight throughout the week leading up to the event.  Johnson can drive it as far as anybody but he knew the premium of hitting the ball in the right place would be more important than distance.   He has been working for a long time on the power fade.  The power fade actually reduces distance but facilitates control and direction and Johnson was just about perfect in his driving endeavors this week.  It seemed that all the big hitters on tour such as DeChambeau, McIlroy, Rahm, Thomas, Wolfe and others couldn’t consistently keep it in the fairway.  Johnson seized the lead after the first 36 holes but the leaderboard was crowded with 10 players within 2 shots of the lead.  Johnson’s 65 in the third round vaulted into him the lead by 4 going into Sunday.  A wisp of drama started on the par 5, second hole when Johnson hit his second shot about 40 yards from the hole but the pitch was a difficult one over the front bunker with almost no green to work with as the pin was just above the bunker on the front side of the green.  Johnson plunked this shot into the bunker.  We have all done this on countless occasions but not the No. 1 player in the world.  Johnson now had a difficult bunker shot to get the ball close and save par–he pulled it off as a routine matter and a par.  Most of us would have made bogey or worse in that scenario as it took a ton of skill to get the ball close to the hole.  Was Johnson feeling the pressure?  It has happened to him before in other majors and his playing partners started to think about a potential opening. Bogeys on the 4th and 5th hole reduced the lead to two shots but Johnson slammed the door shut as there would be no more miscues in the final round and with birdies on 14 and 15, it was all over.  There was little to no drama in this event as the field could not muster a charge to put any pressure on Johnson. Cameron Smith from Australia and Sungjae Kim from South Korea played extremely well but couldn’t mount a charge to rattle Johnson.  Smith seemed to hit the ball all over Augusta National but executed a number of wonderful recovery shots for pars and birdies.  Kim hit some remarkable shots out of trouble and hung in there with a wonderful methodical swing that reminded me of LPGA tempo which was very effective.   It was a bit ironic that the famous winds and ultra fast greens did not materialize until the final few hours of Sunday’s final round.

As I predicted, the gods of golf were not kind to Bryson DeChambeau.  DeChambeau was basking in the media light of being the favorite coming into the event.  The light from his US Open victory shone brightly on his chances to dominate this event.  He seemed to succumb to the media hype albeit not in arrogance but his confidence was evident throughout the week as he classified Augusta National as a par 67 for him.  I don’t think he was trying to denigrate Augusta National as “easy” but he was handicapping what his length off the tee could yield.  He went as far as to highlight what clubs he would be hitting on every hole in the tournament.  The problem with all of this is that you actually have to go out and play the course and execute these ideas.  Bryson couldn’t consistently keep the ball in the fairway and he made some big numbers throughout the first two days and he had to really turn it on to make the cut.  He complained of headaches and some dizziness while feeling physically okay after testing negative for the COVID virus.  My take is that the gods of golf were telling him to keep all of this to himself next time and let his play do the talking.  DeChambeau took it all in stride and offered no excuses, he would go back home to regroup and he will be back strong.

Kudos to Bernard Langer…the two-time winner of the Green Jacket bested DeChambeau by a shot at age 63 with a 29th place finish at 3 under par. The game of golf can be the greater equalizer. 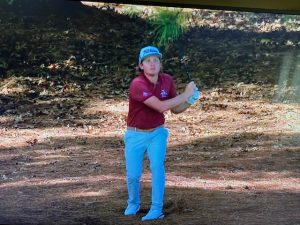 Cameron Smith out of the pine straw on 9–made birdie

And there was Tiger Woods…Tiger had a great first round and I think he may suffered the most from the absence of the patrons.  He couldn’t generate enough momentum in the second round and fell into the middle of the pack as putts that dropped on Day 1 didn’t on Day 2.  The final round presented one of the most ironic results in Tiger’s glorious career.  Tiger approached the 12th hole (Golden Bell) in the final round and the usual winds were swirling through the pines.  This was the same hole that vaulted Tiger into the lead and led to his eventual victory in 2019.  Six professionals in that year had played themselves out of the tournament by knocking the ball into Rae’s Creek while Tiger made a routine par by approaching the hole safely over the left bunker.  Here we are the 2020 event–it’s November and there are no patrons–what happened next was amazing–Tiger’s ball found the front of the green but spin caused the ball to roll back into the creek.  It was a significant unforced error that was compounded as things can even speed up for the best player in the world.  He booked a gigantic 10 on the hole and fell into 57th place.  What happened next is even more incredible–Tiger birdied 5 of the last six holes just about the time when the course conditions were probably the most difficult that they had been all week.  Tiger handled the adversity at 12 with class and his skill to end the tournament with that finish was further evidence of his greatness. 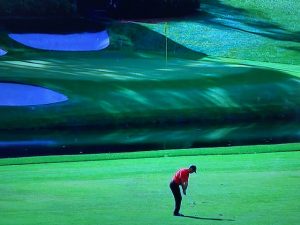 The final major of 2020 was thus decided.  It wasn’t the most exciting event and I found the absence of a crowd to be uniquely negative and slightly boring.  It wasn’t boring for Dustin Johnson who demonstrated his No. 1 ranking and achieved another milestone in his brilliant career.  It’s hard to believe that if we’re lucky and get the vaccine, April 2021 will be here and we’ll be doing this all over again. 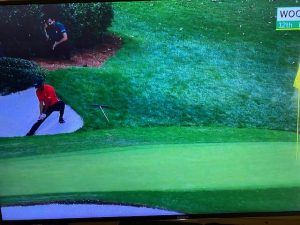 Tiger in the back bunker on Number 12