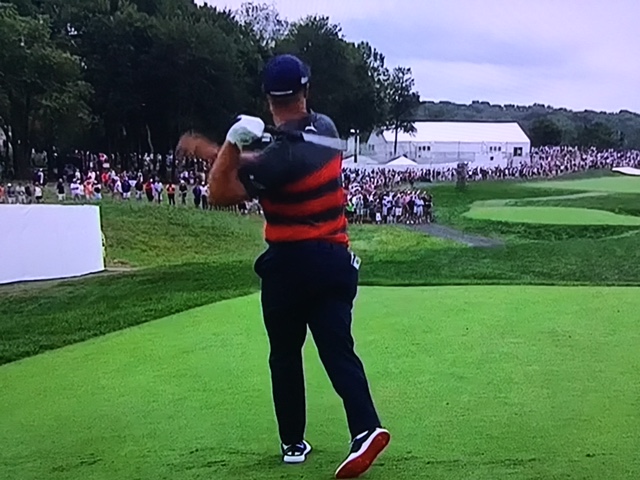 I usually don’t compose opinion pieces, but I couldn’t resist when it was announced this week that Bryson DeChambeau and Brooks Koepka would square off in a match made for TV  during Thanksgiving weekend.

It’s tough to watch the world of golf succumb to what seems to be a manufactured feud between these player stoked by bad behaving fans at PGA events and a bunch of baloney posted on social media sites throughout the year.  Golf and social media fuels the fire to sell copy as media does with most fabricated material.  The players’ behavior seemed to be non contentious but there was plenty of innuendo and fake intrigue to spur all the nonsense from the media.  As the Ryder Cup  rolled into the end of September, there was a surge of “speak” from fans wanting the pair to play together to mend their differences-real or imagined.  Captain Steve Stricker avoided the temptation, wisely separating both of them as they effectively competed in their respective pairings during the Cup and it seemed that DeChambeau had a pretty positive influence on Scotty Scheffler as  Scheffler  defeated World No. 1, Jon Rahm, in the Sunday singles competition.  Both guys hoisted the Ryder Cup in victory perhaps as an omen to the end of there supposed hostilities but I’m sure it won’t end there given the commercial potential in front of them.

There’s nothing wrong with two guys competing and fans picking their favorites.  Personal animosity has no place in the game of golf and you can do your talking with your golf clubs.  There have been plenty of rivalries in the game,  such as Palmer/Nicklaus, Woods/Mickelson, which were highly entertaining on the golf course without a lot of purported personal comments. Starting in the 1960’s, personal stroke play competitions were sponsored by the Shell Oil Company through “Shell’s Wonderful World of Golf.”  In those days of black and white television, the stars of the game played for a few dollars on some of the greatest courses in the country.  The shows ended in 1970, and were bought by Jack Nicklaus’ production company and matches were held from 1990-2003.  The second stage of the presentation wasn’t very popular as the PGA Tour became increasingly popular among golf fans everywhere.  Shell’s presentation by today’s standards would never make it–you could hear a pin drop during the competition and the TV commentator whispered while the players prepared to putt or play a shot.  For me, it would be equivalent to watching a 7 day cricket match–perhaps my snoring on the couch would be louder than the Shell presentation.

I personally think DeChambeau is a bit “over the top” in his exposure as one of golf biggest stars and draws.  His entry into the long drive competition and now the TV match with Koepka seems to be a bit much of keeping him in the public eye.  He doesn’t seem to be egomaniacal  about these things but the impact of all of these events seem a bit telling to keep him in the golf public eye.  I personally don’t think that any of this matters very much, but I hope it doesn’t interfere with his ability to play well and compete on the PGA Tour. On balance, I still believe he’s a great player,  who has brought innovation and excitement to the game of golf.   He has a great talent but the game has turned on some of it’s great stars-dimming their future in the game–David Duval is an excellent example of what can happen to a great player.

I will not watch the “Feud Match” on Thanksgiving weekend but that’s my choice–I’m sure I’ll probably be in the minority of golf fans.  I’ll be out playing and after we’re done, I’ll probably grab one of my Shell Wonderful World of Golf DVD’s and take a nap.