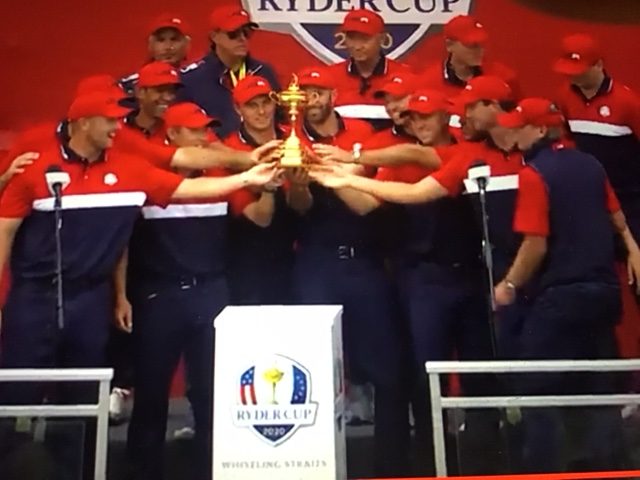 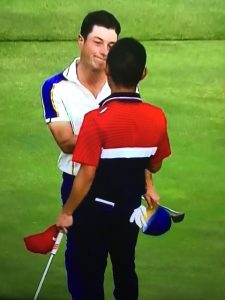 Morikawa halves match with Hovland sealing the Cup for the USA

The USA crushed the Europeans 19-9 in the 43rd Ryder Cup championships at Whistling Straits in Kohler, Wisconsin.  For many golf fans, the win was expected but the margin of victory certainly was not.  There will be hundreds of stories written about this event as to how the USA now has the upper hand in the series between these two squads.  No matter what the factors are, the USA squad proved their mettle at this event and thoroughly outplayed the Euros.  The Euros were in deep trouble from the very beginning being down 6-2 after the first day of alternate shot competition. Traditionally the Euros excel at alternate shot competition and the second day of four ball competition.  After the third session, the Euros were down 9-3, which is almost a hopeless position to be in.  In the afternoon, four ball session, the Euros made a valiant attempt to comeback but could get no closer than 11 1/2–5 1/2.  No team has ever come from a six point deficit in the singles matches.  The USA would only have to win 3 points to retake the Cup so the event was decided pretty early in Sunday play and the rout was on.

The USA team capitalized on the home court advantage with 95% of the 40,000 fans cheering wildly for the team while booing some of the European misses and unforced errors.  Fans at this event violate all etiquette and decorum that one would expect at attending a major golf competition.  The difference in the Ryder Cup from major golf events is that the players actually embrace and encourage the bad behavior, which I guess doesn’t really make it bad at all.  Whistling Straits is the brainchild of its owner, Herb Kohler and was designed by Pete Dye in the dairy fields of Wisconsin.    The venue sits magnificently on the shores of Lake Michigan.  Kohler, Wisconsin is the home of the Kohler company, a preeminent company in the field of plumbing fixtures.  Every motel and hotel in Kohler irrespective of the Motel 6 all the way to the exclusive American Club are supplied with the latest, fanciest and greatest of the Kohler plumbing line of faucets, toilets and fixtures.  There is some discussion that the Euro team accommodations  may have had something in their water supply that accounted for their indifferent play.  The US fielded a young, aggressive and talented team guided and moderated by the taciturn demeanor of Captain Steve Stricker.  Stricker had to confront some issues as how to pair this talented group, defend his Captain’s picks, and deal with the ongoing media sensation of the DeChambeau and Koepka feud.  There was a call to pair DeChambeau and Koepka together (including this writer) but Stricker resisted  doing that.  He was right to do this as such a pairing would have focused more media attention on the pairing to the detriment of the team.  The Euros, under Captain Padraic Harrington, decided to use a time honored tradition of bringing successful veterans such as Sergio Garcia, Ian Poulter and Lee Westwood to motivate and coach their rookies.  Stricker’s pairings turned him into a genius and I thought the pairing of DeChambeau and Scottie Scheffler was particularly intriguing.  Scheffler, yet to win on the PGA Tour, seemed to feed off DeChambeau’s enthusiasm and won his singles match against World No. 1, Jon Rahm.  Former World No. 1, Dustin Johnson surpassed all expectations going 5-0-0 in his matches after a so-so record in his history of playing in these events.  Johnson also shrugged off his disaster at the PGA Championship at Whistling Straits a few years ago.  He didn’t have to worry about the “purported” bunker on the 18th as it was enveloped by a spectator grandstand for the Cup matches.  Patrick Cantlay continued his torrid year end play winning his singles match against tough competition from Shane Lowry.  On the flip side, facing an 11 1/2-5 1/2 deficit, the Euros knew that it would take a gargantuan collapse by the US to keep the Cup.  The Euros are usually always in the lead going into the singles matches on Sunday and being this far behind made Captain Harrington’s task virtually impossible. DeChambeau marched to the first tee in his singles match on Sunday against veteran Sergio Garcia and promptly drove the 1st green some 350 yards and holed the putt for an opening eagle.  Game over!   Rory McIlroy didn’t perform well in these matches and he was visibly upset with his play as his performance makes a big emotional impact on the rest of the squad.  The Euros best performers were Rahm and Victor Hovland who could only combine for a 1/2 point on Sunday as Hovland hit a tremendous iron to the difficult 18th green and bested Morikawa to win that hole and halve their singles match.  Morikawa played great throughout the event and sealed the USA victory with a tremendous iron shot to the par 3, 17th hole to go 1 up in the match.  Although I’m sure he wanted to make the putt on 18 for the match win, Morikawa’s miss seemed to be a fitting ending to a well played match while securing the USA recapturing the Cup.

The 19-9 USA rout was the largest margin of victory in this event since the advent of the 28 point system.  What does it mean for the future of these matches?  The USA team would have think it is the start of a new era of many more victories to come with a team that is young and very good.  Talk of wanting to “pour it on” the Euros is all very interesting, but we have always seen sporting events when you wish you had some of those “routing” points in the next match.  It’s instructive that this view is not articulated by Captain Stricker but by the players enjoying the “moment.”  I think the “gods of golf” will have something to say about this in the future as a humbler, more respectful approach to winning in this manner would have been more appropriate and deferential to golf and the spirit of The Ryder Cup.  McIlroy said that it is the best event in golf and I would agree that it’s the best team event in golf.  Golf always brings out the personalities of individuals and the Americans displayed a pretty good degree of sportsmanship.  After being pounded so many times by the Euros, it is understandable that a little chest beating is probably appropriate but hopefully it doesn’t result in a spirit of arrogance and overconfidence.  Jon Rahm, Victor Hovland, Rory McIlroy and some future Eurostar could combine with the gods of golf to spoil future endeavors.