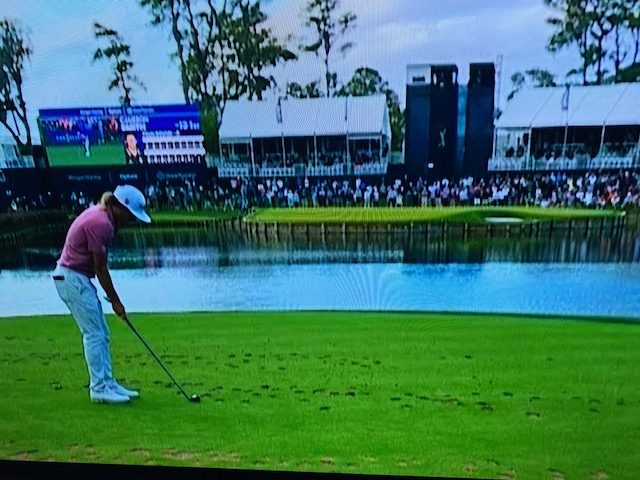 The Player’s Championship turned into an endurance contest with significant rain delays, howling winds and cold temperatures to plague the field.  From Thursday on, the field incurred significant stoppages of play as the weather presented unplayable conditions.  Play on Saturday was nightmarish as the best players became the pawns of Mother Nature’s onslaught.  There was a constant drone of “plops and, splashes” accompanied by pained expressions and drones from the gallery as tee shots to the 17th hole island green continued to be blown into the water.  Over 60 balls ended up in the Sea of Sawgrass, most of them on Saturday.  The highlight of the 17th hole carnage was  Shane Lowry exacting revenge  with a hole-in-hole on Sunday.   There were so many delays that the third and final rounds were completed on Monday.  Saturday was a day to remember for this event as the professionals struggled mightily in the conditions.  These are the best players in the world and these elements rendered their shots improbable and unpredictable.  Professionals don’t like unpredictability-the game of golf is hard enough but these guys know exactly what they can do with a golf club–except in conditions like these.  Matthew Wolf parted ways with one of his irons after smoking an approach shot in the water on the 18th.  Prominent players missed the cut including Jordan Speith, Colin Morikawa, and Xander Schauffele.   Morikawa won the 17th hole prize with putting 4 balls in the water on 17.   Amateur golfers are smiling with a  sort of warped, hidden emotion watching these professionals suffer in these conditions.

Someone would have to survive all of this carnage over the five days of play and there were a number of candidates.   For a while, Justin Thomas looked to be the favorite as his 69 in the horrible Saturday conditions seemed to view him as invincible.  The TPC course at Sawgrass is really very difficult as it’s a course where there is no opportunity for relaxation.  In addition to the difficult weather conditions, the rough was quite thick and inconsistent from hole to hole , and certain lies in the rough were better than others as the field was able to take it on but it was still a factor.  There were as many as 10 players in contention for the title and Keegan Bradley and Dustin Johnson came from the back of the pack to break into the top 10.    Johnson had the best round in the tournament with a closing 63, which would seem an impossibility on this difficult golf course.  At one point, there were as many as 4 players tied for the lead but that was before Cameron Smith’s birdie fest on the back nine. 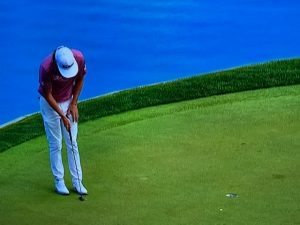 Cameron Smith emerged from the pack and grabbed the throat of this tournament with his putter especially on the back nine.    It seemed that Smith would be in big trouble on Saturday, when he hit a duck hook on the 18th hole into the pine straw on the right side of the hole.  It seemed that a bogey or worse was in the offing but Smith drained the first of many critical putts that would vault him into the winner’s circle.  In the final round, Smith continued to drain putts for par with over 10 one-putts.  On the 17th hole with a two shot lead over Paul Casey and Anirban Lahiri, Smith came to 17th hole with playing partners Paul Casey and Sam Burns. Burns took out a pitching wedge and knocked the shot into the water.  Smith would be next to play.  Smith didn’t need to see Burns knock the ball in the water with a one shot lead.  The difference between these professionals and amateurs is the intensity of their concentration.  I would hardly be able to hold the club after watching Burns knock his tee shot into  the water.  With a one shot lead, you would think that Smith would simply be satisfied with getting his tee shot safely on the green.  Instead, Smith hoisted a nine iron right at the pin, which was about 5 yards from the water, and the shot landed on the green five feet from the hole.  He would make the putt for a birdie and proceeded to the 18th hole-the most difficult par 4 on the PGA Tour. 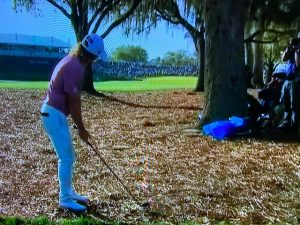 Smith had trouble with this hole all week and his tee shot was horrendous as he missed the fairway and ended up in the pine straw on the right.  He had almost no shot to put the ball on the green so he blasted an iron out of the straw and it ran from right to left and rolled right into the water.  The wheels could have easily come off but Smith nailed his approach shot after taking the penalty within 3 feet to make bogey.  He would record 3 bogies out of the four rounds.  He needed that birdie on 17 to eventually secure the victory.  Lahiri ranked 332 in the world, coming into this event, hung in there and made his own birdie on 17 to cut Smith’s lead to one shot.  Lahiri, who hasn’t much success on the PGA Tour, approached the 18th hole needing a birdie to tie Smith.  After driving the ball right down the middle of the fairway, Lahiri’s approach shot wasn’t enough to afford him that birdie opportunity.  It was a terrific tournament for Lahiri and Paul Casey who contended right until the very end. Lahiri was pleased with his play noting that his inexperience in this type of stage and some poor club selections cost him opportunities in the final round.  Nevertheless a second place check of over $2 million is apt to soothe the pain.