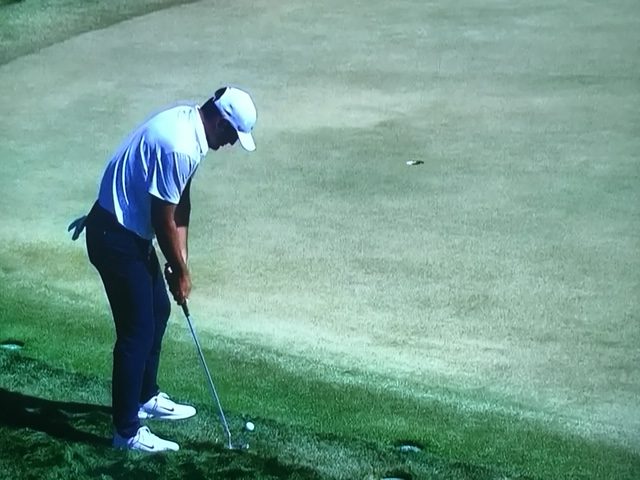 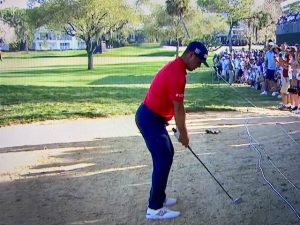 Arnold Palmer would have been pleased with his event this past week.  Bay Hill was set up as if it were a US Open layout.  There was penal rough, narrow fairways, well placed bunkers, challenging pin positions  and the topping on the sundae was a lot of wind. Six players contended for the top spot and there were three different leaders in the last nine holes.  Billy Horschel had the overnight lead but on Sunday, he ballooned to a front 9, 40, to lose the lead to Victor Hovland.  Horschel never gave up and continued to persevere from errant shots on the back nine to stay in contention.  He made some terrific putts for par on the back nine to stay in the fray and still had a chance as he came to the 18th hole.  Tyrell Hatton came back from a third round 78 to shoot 68 on Sunday and posted a score early that was almost enough as he finished in a three way tie for second place.  Hovland drove the ball flawlessly into the wind but the wind and the elements played havoic with his approach shots leaving him in a number of bunkers where he could not get up and down sufficiently to hold the lead.  His bogey out of the sand on the 17th hole removed him from the lead.  He only got up and down out of greenside bunkers 3 out of 12 times, which isn’t going to fly on the PGA Tour. Gary Woodland seemed to come out of nowhere and played consistently well in these tough conditions.  He took the lead at 6 under par after a spectacular eagle putt on the 16th hole.  Unfortunately, he ceded the lead immediately on the difficult par 3, 17th hole.  The pin position on this hole was diabolical and Woodland actually “duffed” a bunker shot and missed a short putt to card a horrendous double bogey to fall out of the lead.  His troubles continued as he bogeyed the 18th hole to lose 3 shots in 2 holes and finished tied for third at 3 under par.  Chris Kirk had many opportunities coming in but he could not take advantage of them and he also finished third.  After all of the carnage, Scottie Scheffler emerged from the pack to take the championship.  It seemed that he almost backed into the winner’s circle.   Scheffler’s birdie on the 12th hole took him to 5 under par and it did not seem at the time that this would be enough to win the event.  Scheffler hit some pretty horrible shots coming in, and had to hack out of the rough a few times to get into position.  Unlike the rest of the contenders, he was able to hole the putts to save par, particularly on the par 5, 16th hole where it seemed he would be fortunate to make a bogey and yet he drained another long putt to save par.  Scheffler survived the ordeal and his clutch putting in the final six holes was key to the victory.  Scheffler is on a roll with two victories in his last three starts boosting his confidence to an all-time high.  Scheffler’s confidence was really buoyed by his success in the Ryder Cup where he defeated World No. 1, Jon Rahm, in his singles match.  This week Rahm gave all golfers a huge surprise when he “whiffed” and missed a putt of 10 inches proving that it can be happen to anyone–even the best players in the world.  Rahm, with class, sucked it up and finished 17th in this event–it would have been horrible if that putt had cost him victory but this wasn’t Rahm’s week.

Arnold Palmer would have been proud of this event.  The professionals struggled mightily in an event where only 10 players were under par.  This is quite a different picture from the rest of the current season where the field has bludgeoned the golf courses with virtually the entire field under par.  The course set up was not manufactured to be difficult but it did have a US Open feel with the penal rough buttressed by the gusty winds that were evident in all the rounds in the tournament.

I found the entire Phil Mickelsen affair to be unfortunate for the game of golf.  Golf has proven to be a paragon for how professional sports should be governed and managed.  Golf is not a team sport and doesn’t suffer the constant barrage of media coverage on salaries, bonuses, free agencies, trades and all the nonsense that is pervasive to these sports.  Mickelsen made public comments potentially supporting the formation of an alternative professional tour managed by Greg Norman’s management company and financed by the Saudi government.  Mickelsen’s behavior was brazen, ill-advised and non sensical criticizing the PGA Tour coming out of nowhere.  It was rumored that a number of PGA professionals would consider joining an alternative tour in pursuit of the almighty dollar.  Mickelsen’s comments put him in the middle of a significant controversy that has cost him dearly both professionally and monetarily.  Our society is plagued by the consequences of it’s inability to manage the perils of social media.  I believe this is Mickelsen’s real problem as people just pop off because they’re famous and don’t assess the consequences of how their message will be received.  Mickelsen needs a course in media training and could have expressed a position that may have sparked some controversy without making him look silly.  Mickelsen was coming off a spectacular year through his unlikely PGA victory at Kiaweh as a 50 year-old.  He has an immense favorable reputation as a player that cannot be questioned.  As an individual, there is the wonderful family man but there is an undercurrent of criticism with unsubstantiated links to gambling and some other nefarious behavior.  Unfortunately, none of this matters, Mickelsen’s comments drew the ire of his fellow PGA professionals and the way he expressed his opinions resulted in a torrent of negative economic consequences for him.  Most, if not all of his sponsors, dropped their support within days of his comments.  He lost his mutli-year sponsorship with KPMG, which has supported him for many years.  I’m not sure that the punishment fits the crime here but this is the society we live in.  Mickelsen has decided to withdraw from the scene until the Tour Professionals accept his apologies, which has already started to occur.  Some fans believe that this caper cost him the captaincy of the US team in the next Ryder Cup as Zack Johnson was named Captain about ten days.

It’s a shame that golf has to endure a black eye as one of the best players of all time couldn’t manage his social media feed.  I’m sure that time will repair this situation as Mickelsen will and should maintain a better reputation. Golf is a game that cannot be conquered.  We all the play the game to get better and players on the PGA Tour play the game to be the best player they can be and that is the highest priority.  The society presents the value of excellence in golf through the PGA Tour and the competitive nature of these tournaments determines who is the best player.  Playing on a tour for guaranteed appearance money will not provide the competitive balance that the PGA Tour provides and appearance money to show up for alternative tour is tantamount to a participation trophy.

It strikes me as ironic that this week’s tour event was founded by one of the greatest golfers of all time and the principal figure in establishing the credibility of the PGA Tour.  Yet this great tour is shrouded by fresh controversy of the prospect of a competitive tour to dilute the quality of the PGA Tour for the pedestrian pursuit of money.  It’s ironic that one of the present day’s most popular players became embroiled in the controversy.